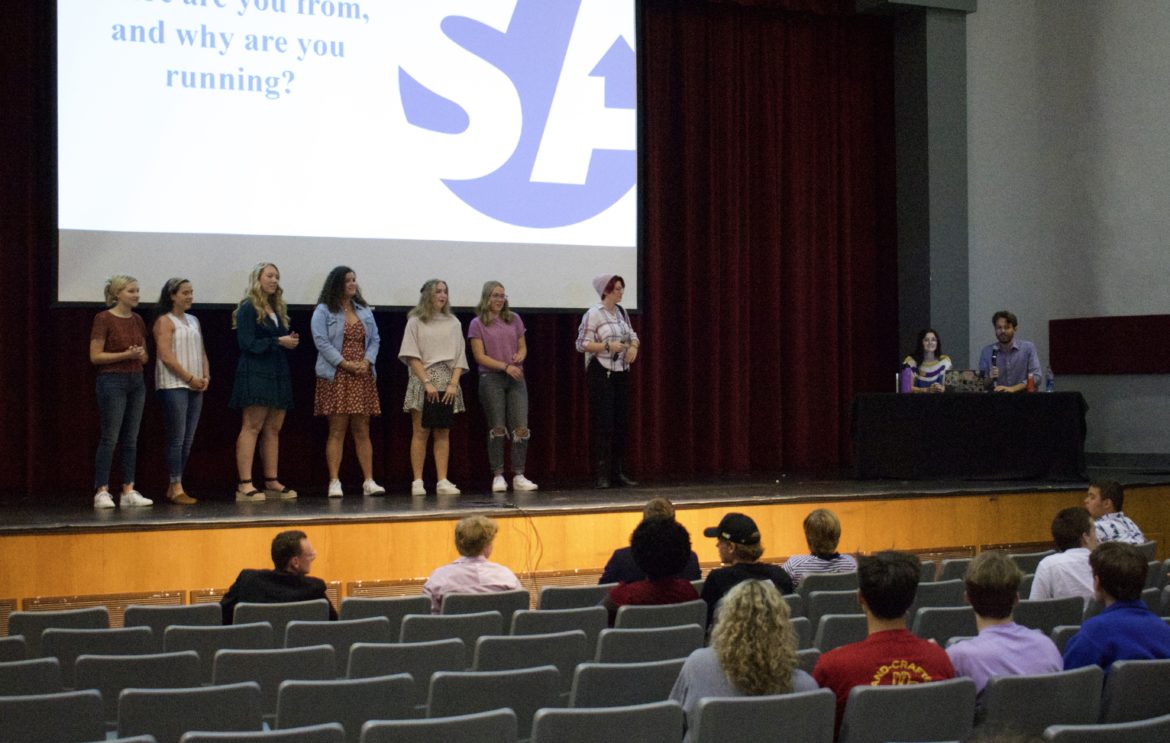 The event was created to allow freshmen to interact with the student body and convey why they would be a good representative of their new class. Senior Ethan Brazell, SA president, said the purpose for the event was twofold.

“We wanted students to have the opportunity to express their personality, what they stand for and have a platform to promote themselves,” Brazell said. “The other side is that we wanted to do a fun event that promoted elections.”

The candidates were asked a variety of questions. Some were pensive, challenging candidates to choose the most valuable leadership trait, while others were humorous, asking about disliked movies and conspiracy theories.

The audience, mostly freshmen, was engaged, frequently laughing and reacting to answers from the candidates on stage. When he heard there would be a debate, freshman Sam Gooch said he was very excited to get to know the candidates better and enjoyed the entire event.

“I found the debate extremely entertaining,” Gooch said. “I’m a humorous guy, and there were a lot of funny things that happened throughout the debate. It really helped me meet the candidates, although I would’ve liked to see a few of the candidates actually debate.”

Freshman candidate Adele Duncan said she was nervous to compete against people she had never met but ended up gaining a lot from the experience.

“When I found out there was going to be a debate, I got a little bit worried for a quick moment because I did not know how I was going to ‘fight’ verbally against people I had just met,” Duncan said. “Luckily, it was more of a ‘get to know you’ type of setting, and I actually became excited. If the debate had not happened, I don’t think many people would have known who they were even voting for.”

A debate has been a common event during elections for the SA president each spring but has never been done during the election for freshmen representatives.

The motive was due, in part, to a crowded field of candidates. Fourteen freshmen ran for the position, including five males and eight females. This stood in contrast to six candidates from the previous year.

Brazell said he considered the debate successful in renewing student interest in the SA, as a number between 125 and 150 attendees were present to learn about their potential representatives.

Members of the SA believe the event was a promising start for an energetic year.

“A goal we made back in May was to create something that people wanted to be a part of,” Brazell said. “It was very encouraging to see that people want to be involved in what we are doing this year.”