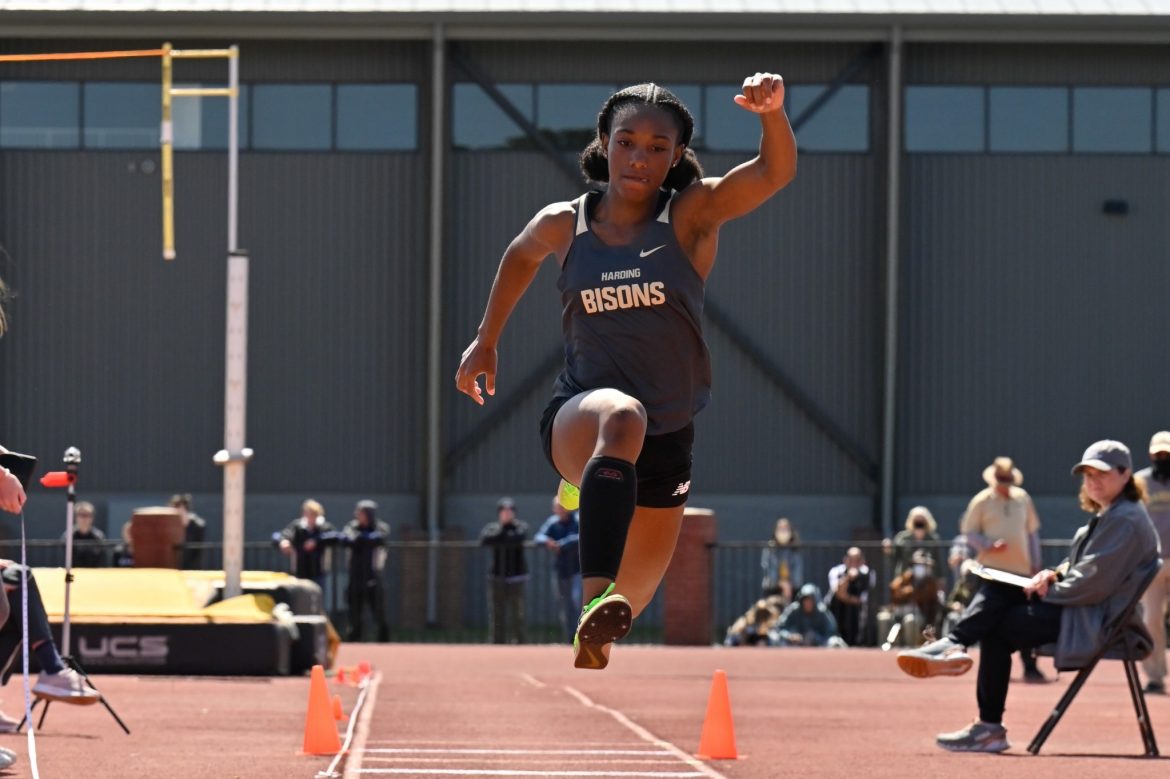 The Lady Bisons Track and Field team traveled to Southern Arkansas University in Magnolia April 15-17 to participate in the Great American Conference (GAC) Championships. With 324.5 points, Harding defeated Oklahoma Baptist University, who was in second place, by 91.5 points. This past competition was the fourth GAC Championship win for the Lady Bisons, with the past championships occurring in 2016, 2017 and 2019.

Head coach for track and field Don Hood spoke about his favorite parts of participating in the GAC.

“Track is really hard because you can’t hide like you can in other sports,” Hood said. “When they call your name, you gotta perform. Helping athletes learn to deal with stress and pressure and the enjoyment of helping them improve is really fun. Rivalries are fun . . . The one thing about the [GAC], [is that] all the coaches get along pretty well. That makes it a lot more fun. Everyone was very congratulatory towards the good things and very sympathetic towards the not-so-good things.”

With the Lady Bisons leading the GAC, Hood also won the GAC Women’s Coach of the Year Award.

“That’s one of those things — if you have a good team, you have a good coach,” Hood said. “We had the best team in the conference this year and that made me look really good. Our assistant coaches are fantastic. There’s no way that one person deserves the ‘of the year award.’ It’s a program award is how I see it. That makes me feel good about where we are as a group and to be honored in that way.”

For several of the freshman competitors, this was their first time competing in the GAC Championship. Freshman Mariah Miller was a long jump, triple jump and 400-meter competitor. Miller won the triple jump by three feet.

“My experience at the GAC was pretty awesome,” Miller said. “As a freshman, it was my first ever conference meet, and the atmosphere was very intense. Though there was a lot of pressure, we all stayed focused, and we competed.”

Along with the freshmen competing, there were also many who had competed in the conference throughout their college experience. Senior Cara Mason competed in shot put, hammer and discus. Mason won both the shot put and hammer events.

“I always love the conference,” Mason said. “It’s the one meet of the year where you are competing for your team, and it’s not just about getting PRs but doing your best so your team can win. It’s also a great time just to be with your teammates and get to cheer them on — then, finally winning and all of your team’s hard work has paid off. It’s the most rewarding. All of those early mornings, hard lifts and everything you’ve done up to this point has finally paid off.”