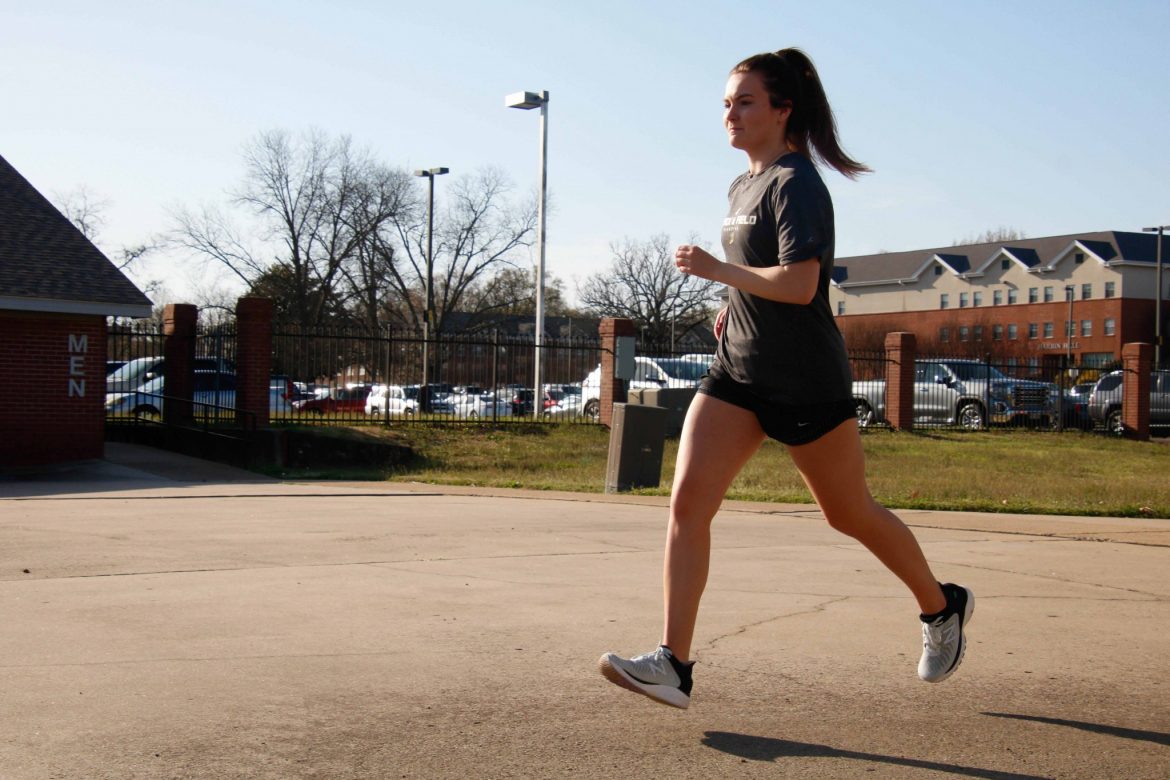 College students experienced a sudden change of plans due to the pandemic, and for some students, that meant not being on campus for school and opting for remote classes instead. While many made that decision themselves, some did not have the option to stay on campus, including freshman Sydney Reynolds.

Reynolds planned on embarking on a new adventure at Harding University and being a part of the cross-country and track teams. However, after experiencing a life-threatening brain bleed, Reynolds spent her first semester of college — and a large portion of the COVID-19 pandemic — recovering. One positive of the pandemic was that Reynolds had the opportunity to begin her first semester at Harding online.

On June 27, 2020, Reynolds said she woke up with a strange pain in the back of her head but did not experience the pain again until July 20. While she was running, the sharp pain in her head reappeared. That day, Reynolds said she went to a clinic, and the doctor told her it was nothing more than dehydration and that everything would be OK. The following day, the pain worsened, and Reynolds went to the emergency room to find that she had a brain bleed.

“They did a scan of my head,” Reynolds said. “And [the doctors] were like, ‘So you have a brain bleed going on. This could have killed you. I don’t know why you are still alive.’”

Shortly after the visit to the emergency room, Reynolds scheduled her surgery for Aug. 27. About two days after the surgery, Reynolds was released from the hospital. The surgery did not only impair her ability to run, but it impacted her day-to-day life.

“I did classes online last semester, which was really rough because of the damage from the surgery,” Reynolds said. “I wasn’t cognitively there. When I first woke up, I couldn’t tell the difference from a circle and a square.”

Her online classes consisted of the simpler subjects to help accommodate her situation, which made it easier to manage, Reynolds said. This semester, Reynolds is on campus, attending classes and fitting in among the sea of students. While she may not know the campus and college life like other freshmen yet, Reynolds said she is glad, nonetheless, to be here.

Reynolds had her second surgery on March 4. The surgery was minor, but completed the previous surgery by adding the finishing touches.

Heading into the fall semester, freshman Kylie Phillips was planning on being Reynolds’ roommate, but — due to the unfortunate circumstances — was left with the dorm room to herself. Throughout the fall semester, the two kept in touch, which made their first time meeting each other this spring semester a unique experience.

“It was so weird,” Phillips said. “[We had] been talking so much, and seeing her for the first time was really cool. It seemed like I hadn’t seen her in a very long time, even though we had never met.”

One of the assistant track coaches, Victoria Hood, reached out to Reynolds throughout the fall semester. Despite Reynolds not being there, she was still a part of the team and a part of the Lady Bisons’ future.

“[Sydney] has always been super strong,” Payton Reynolds said. “I mean obviously — she runs cross-country. She has the work ethic and everything, so I knew once [the doctors] told us that she had a chance to recover, I wasn’t really worried that she wouldn’t.”

Now that Sydney Reynolds has been back on campus and training, her presence has made an impact on her team, including junior team captain Sydney Tabor.

“Sydney never complains about [her injury], and she never works any less hard because of it,” Tabor said. “She has a whole new perspective of what she’s been given instead of what has been taken from her, and that’s just amazing and an asset to the team and this university.”

Sydney Reynolds’ teammates and coaches say that her mental toughness and positive attitude about her situation has been an inspiration and a driving force to change their own outlook on life.

“For me, I try to think of what my mindset would be, and it’s honestly been a lesson for me and inspiring to me how she’s handled it,” Hood said. “I feel like we’ve all been able to truly see her faith in God and the trust that she has.”