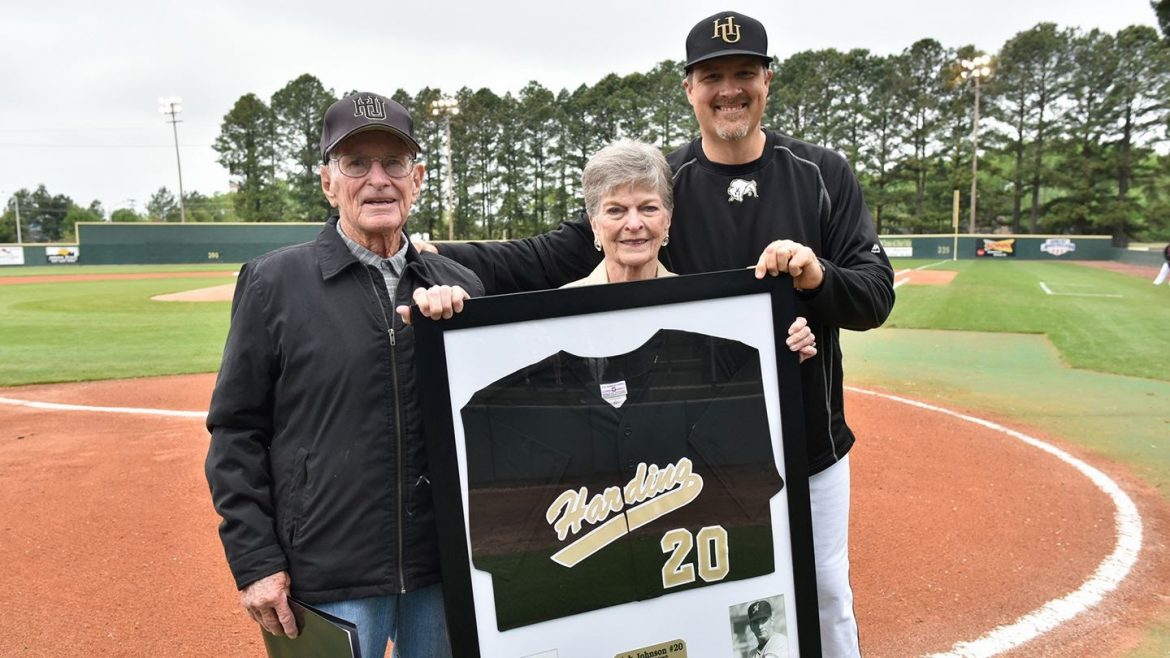 Johnson, known to his players as “Coach Johnson” or “Coach J,” died at the age of 95. He graduated from Harding in 1959, and 10 years later, he returned to coach baseball and the offensive line in football. During his tenure as the head baseball coach, Johnson won 289 games and the 1984 Arkansas Intercollegiate Conference championship and 1985 NAIA District 17 championship in baseball. He also won coach of the year awards in 1975 and 1984 before retiring in 1988.

“He was Harding baseball,” Patrick McGaha, current head coach for the Bison baseball team, said. “He really brought success to the program in the 1980s that they hadn’t had.”

McGaha played one year under Johnson in 1988 and credits Johnson for the position he is in now, as Johnson was the only person to offer McGaha a scholarship to play baseball. Without that offer, McGaha said he doesn’t think he would be a baseball coach.

“I’m forever grateful he gave me the opportunity to play [at Harding], and it wasn’t my best sport, but it was the one I wanted to be a part of,” McGaha said.

Dr. Marty Spears, provost of the University, played baseball for four years under the leadership of Johnson. Spears had a special relationship with Johnson: He was the only senior baseball player the year Johnson retired in 1988, which made Spears take on an unofficial assistant coach role.

Johnson taught his players as much about marriage, family and commitment as he did baseball, Spears said. Spears got married his senior year of college, and Johnson was especially supportive of players’ marriages. Johnson took Spears and his wife to dinner, and on their honeymoon, Johnson gave them a boat ride across Greers Ferry Lake to a lakeside restaurant.

Johnson’s wife, Joyce Johnson, also had a caring relationship with players. Klay Bartee, professor of Bible and ministry and professional counseling at Harding, described her as a “mama,” along with McGaha and Spears. Barteee played football at Harding, and Johnson was his offensive line coach.

“She just took care of us,” Bartee said.

To Bartee, Joyce Johnson was “almost better” than a mom. She looked after him and all of the other players, Bartee said. Johnson “doted” over her and showed his players how to be a good husband, Spears said.

“Coach Johnson was an amazing man,” Spears said. “He had a gift for having the right combination of, sort of, demanding, firm approach to the game of baseball and work ethic and all of that, but he had a soft side that sort of crept out.”

Johnson pushed his players hard, but he always cared about them. He brought out the best in people by believing in them and pushing them, Spears said.

“That taught me a lot about life — that you can be demanding but still show love,” Spears said.