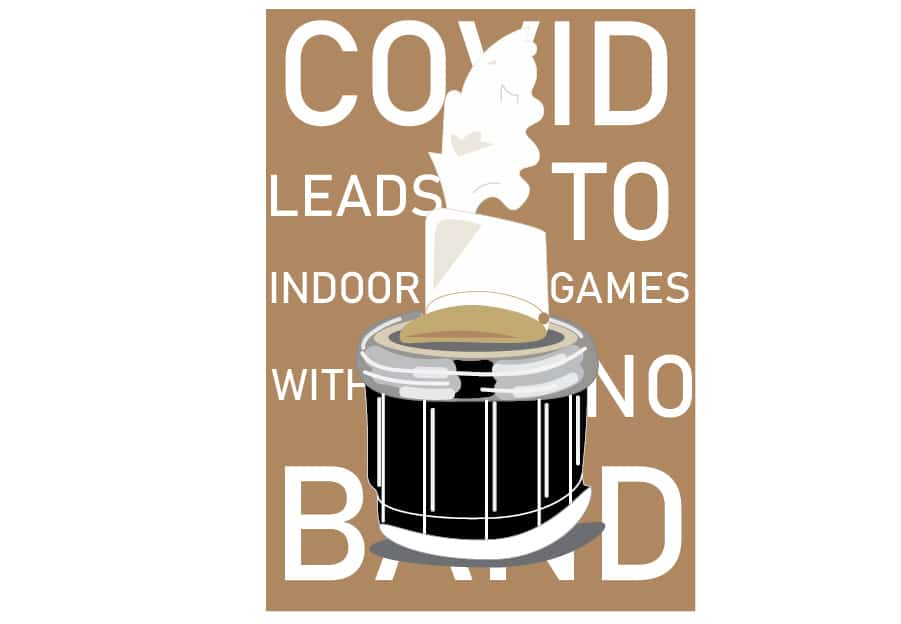 Harding University’s athletic band, the Thundering Herd, has been unable to perform for the basketball team this spring season.

Especially in the winter, weather conditions affect rehearsals for the athletic band, however, there are still spaces for the band to practice.

“We are able to play, though we are not able to rehearse and perform as a large ensemble,” Eric Colgrove, director of bands and orchestra, said. “We were capable of performing in a large group during the fall semester because [we] rehearsed and performed outside.

Colgrove said they practice inside now because of the weather, and they have done so by creating smaller ensemble groups that practice in larger halls. These ensembles include: two small concert bands, a woodwind and brass ensemble, brass quintet, sax quartet, percussion ensemble and more, according to Colgrove.

“Our rehearsals are shortened to allow time in each hall between rehearsals so that the air can be cleaned,” Colgrove said. “The students are also required to wear appropriate masks and bell covers and sit at least 6 feet apart.”

Colgrove said they have been referring to studies by the University of Colorado with findings and recommendations being released by the College Band Directors National Association and the National Federation of State High School Associations to help inform their COVID-19 mitigation efforts and keep the musicians safe.

Despite not being able to play due to COVID-19 regulations, athletic band students still receive their scholarships.

“No matter what we wind up doing, the music department is honoring all major, minor and participatory scholarships for students as long as they are in the pep band and complete the few … recording sessions or halftime streamings,” senior Tommy Ghent said.

Continuing with practices every day, the athletic band plans to perform in the fall 2021 semester and has high hopes for the future.

“We still are having the wind ensemble meet this semester, and we will still have concerts (recorded or live-streamed),” athletic band member junior Peyton Todd said. “We might even have some outside performances like we did last semester once it warms up.”

Todd said other, smaller ensembles will also perform during the concerts, like the brass ensemble, brass quintet and woodwind ensemble. Seniors will continue to have their final recitals, which will have a limited audience while also being live-streamed, Todd said.