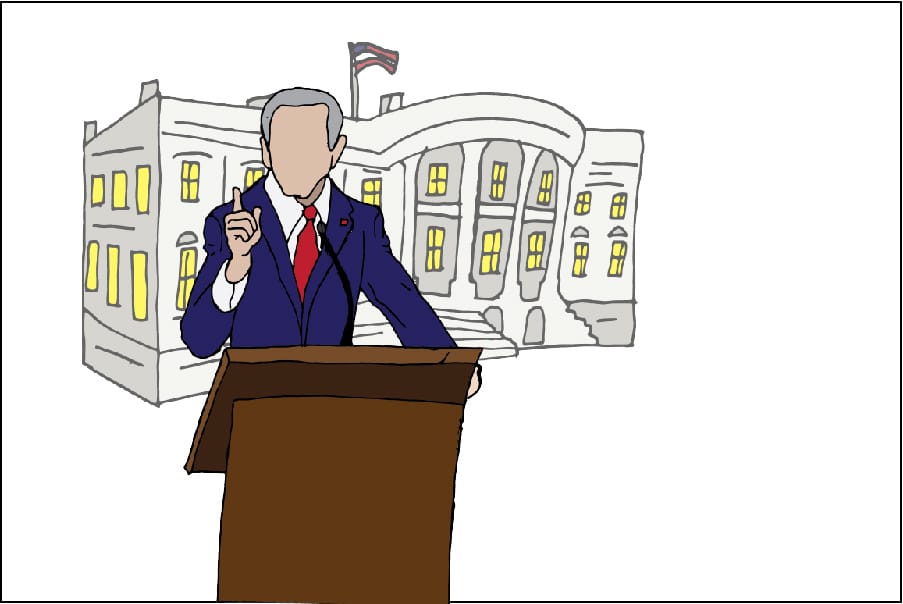 Joe Biden was sworn in Wednesday, Jan. 20, as the 46th President of the United States on the steps of the Capitol building. Kamala Harris was also sworn in as vice president, becoming the first woman of color to hold the position.

Assistant professor of political science Lori Klein identified three major differences that made Wednesday’s inauguration particularly unique: the lack of crowds due to COVID-19, the heavy security presence and the absence of the outgoing president.

While there was no crowd of supporters present, the National Mall was lined with approximately 200,000 flags to represent the people who could not attend due to the COVID-19 pandemic, according to the New York Times. Additionally, according to the Associated Press, 25,000 National Guard troops were brought into the Capitol to provide security for the commencement. While Trump watched the inaugural procession from Palm Springs, Florida, former Vice President Mike Pence was in attendance in Washington.

While Trump’s absence is a break from precedent, he is not the first outgoing president to refuse to attend their outgoing inauguration. According to the New York Times, John Adams, John Quincy Adams and Andrew Johnson also declined to attend the inauguration of their successor.

“Hopefully it’s not a long-term goodbye,” Trump said, according to ABC News.

“Being American is more than a pride we inherit,” Gorman said. “It’s the past we step into and how we repair it.”

In his inaugural address, Biden spoke of the centerpiece ideal that drove his campaign: national unity.

“To overcome these challenges, to restore the soul and secure the future of America requires so much more than words,” Biden said. “It requires the most elusive of all things in a democracy: unity.”

Noah Darnell, instructor of communication, was one of several faculty members who planned to attend the inauguration, but were unable to due to COVID-19 restrictions. Darnell, who has watched every inaugural ceremony since he was 6 years old, said this year felt like a return to normalcy.

“The peaceful transfer of power is what it is about,” Darnell said. “These are the mile markers that we get to reset to.”

Biden made 17 executive orders before the day was over, according to CNN, including ending construction on the border wall, reversing the immigration ban on largely Muslim countries and rejoining the Paris climate accords.

“Inauguration days are really special in our system because we have a tradition of a peaceful transfer of power,” Klein said.