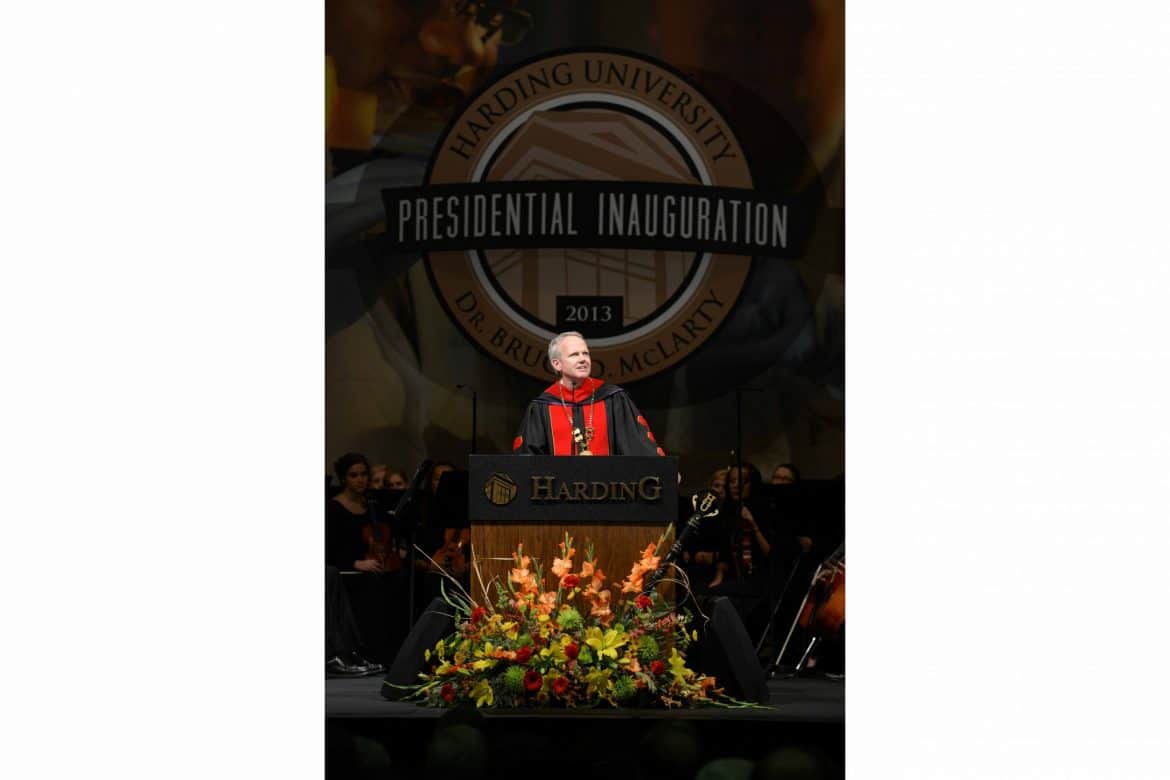 Whenever a visitor comes into University President Bruce McLarty’s office, they will be immediately met with pictures of his family and relics from Harding University’s past. Memorabilia such as a signed Bible from James A. Harding and the University mace all serve as a testament to McLarty’s love for Harding and its history. McLarty will quickly gush about his family and treat visitors like they are old friends catching up after years apart.

But the one thing McLarty is sure guests leave with is a card describing his inaugural phrase he used to describe Harding – a community of mission. That phrase, McLarty said, really embodies what Harding is and will always be to him.

“I think that language is good enough and strong enough that we will never outgrow it,” McLarty said. “When we confront challenges like the ones … in the last seven years, ‘community of mission’ is language that fits in every one of those.”

McLarty, who will retire as Harding’s president at the end of November, has experienced a lot during his time as president. However, the biggest surprise to McLarty while president was the fact that there were not really any surprises.

“My first year as president, the number one question I was asked was, ‘What’s surprised you the most?’ And my answer was that I have been most surprised that there are no surprises,” McLarty said. “[Harding] is the same place that I knew … and the same challenges and blessings that I had known as a student. I just see it from a different seat and a different perspective.”

From having former First Lady Laura Bush call him, “Mr. President,” to meeting Auschwitz survivor Eva Kor, McLarty said he was able to experience many profound and meaningful moments during his time as president. The one that stands out to him the most, McLarty said, is the impact that meeting Ruby Bridges — the first African American student to integrate an elementary school in New Orleans — had on him and the story that followed.

“As I’m listening to [Ruby Bridges], I began thinking about my own experience three years after her own … my classmates were African American twin girls who were the first Black students at the school where I started in first grade,” McLarty said. “A few years later, a group of Harding students in Noah Darnell’s journalism class helped me locate them. We brought somebody to enrich the Harding community, and it turns out I received maybe the greatest blessing out of anyone who was there.”

While Harding has had a profound impact on McLarty’s life and career, many campus members recognize how McLarty has also returned the favor by having an impact on Harding and the students that call it home.

“Even before I was at Harding, I heard nothing but good things about President McLarty from everyone in the Harding community,” junior Katie Beth Sharp said. “He always has a manner of peace and joy about him that spreads to everyone around him, and he has been steady and constant for many people during this time of uncertainty.”

Sharp was not alone in her sentiment, as sophomore Thomas Burke agreed and described McLarty as someone with whom students could be comfortable.

“Dr. McLarty stood out as a president because he was approachable and personable to students,” Burke said. “He was friendly, and you could always say, ‘Hi,’ to him when you walked by.”

While McLarty’s long term successor remains unknown, he said he does have some advice and encouragement for whoever ends up filling the role.

“The parts of this job that I have most loved have been the people parts and hearing conversations on the sidewalk … or finding what’s going on with a group of students in the student center,” McLarty said. “It’s an incredible honor and privilege to get to be a part of the journey of so many people who are in such an important part of their lives.”