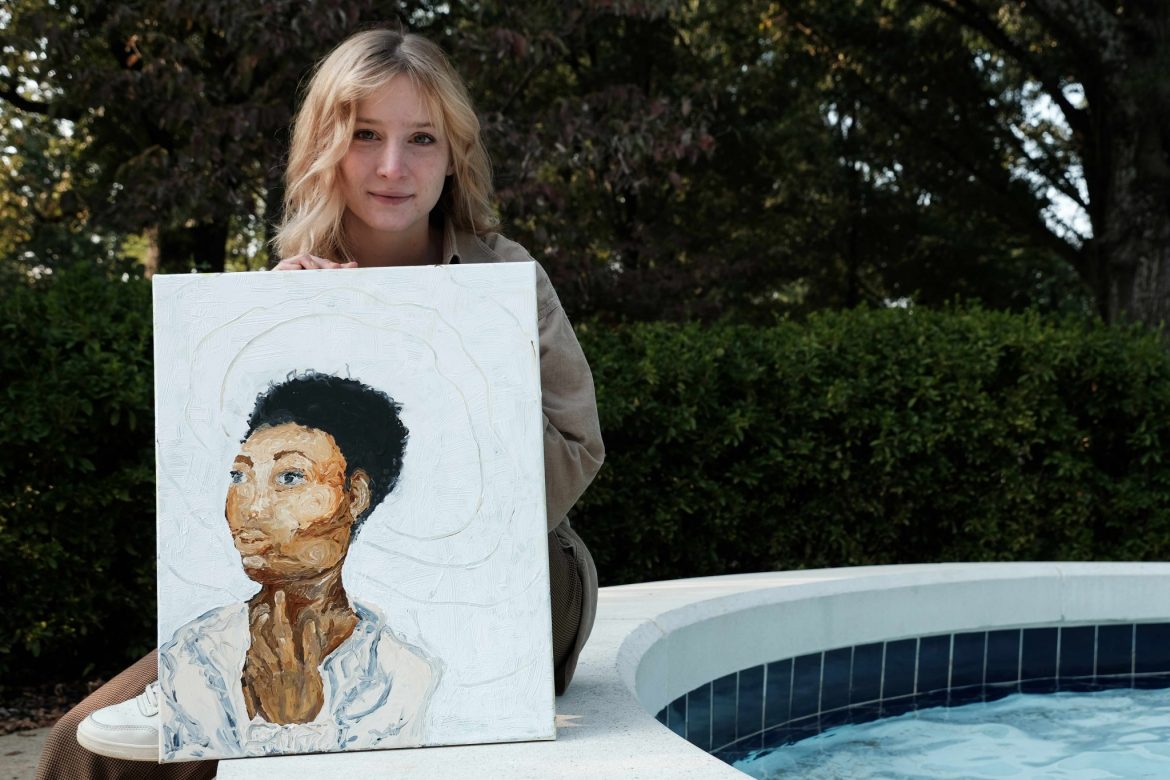 Magdalene Pike holds one of her recent oil portrait paintings by the Administration Building fountain on Oct. 6. (Photo by Audrey Jackson)

At the height of the Black Lives Matter movement this summer, junior Magdalene Pike decided to get involved by starting a series of painted portraits of Black women on campus called “Black Beauty.”

Pike, so far, has painted portraits of both sophomore Halle Miller and senior Raissa Ames and is currently working on more. Pike was inspired by the Black Lives Matter movement and wanted to contribute in some way. This series was her way of doing that. Pike said, as someone who aspires to be an art teacher someday, she was surprised by how much art she had missed just because she grew up not learning about many, if any, Black artists.

“I’ve [been] taught art since the fifth grade and … my teachers talked about one artist that was a person of color,” Pike said.

Pike emphasized that this was a very humbling experience for her because she had not painted people of color before and learning that process really taught her to appreciate Black beauty for what it is.

“I learned so much while I was doing it … I never really painted people of color … so it was really an eye-opening experience,” Pike said. “I wanted to focus on the hair and color of skin and the variety in it.”

Miller said that Black beauty is not something often celebrated and that things like Pike’s series mean a lot to her. Miller said that it’s always great to use the talents that God gave you to bring awareness to social justice issues.

“My saying for this season of life has been, ‘Radically change your little corner of the world,’” Miller said. “Anything that you do does matter, so I think it’s great to just start conversations, [and] to just celebrate Black lives.”

Junior Jenna Lewis, Pike’s roommate, said she loves that Pike is using her art to showcase the beauty of Black women and that she is proud of her for standing up for what she believes in. She said Pike has been donating the proceeds to organizations like D.R.E.A.M. and the Equal Justice Initiative that advocate for Black lives and racial justice. Lewis also said that Pike is donating the money she makes from the paintings towards the Black Lives Matter movement.

“Her paintings showcase so much more than just paint on a canvas,” Lewis said. “There is history and meaning behind each one, and they are bringing light to something that needs to be talked about more.”