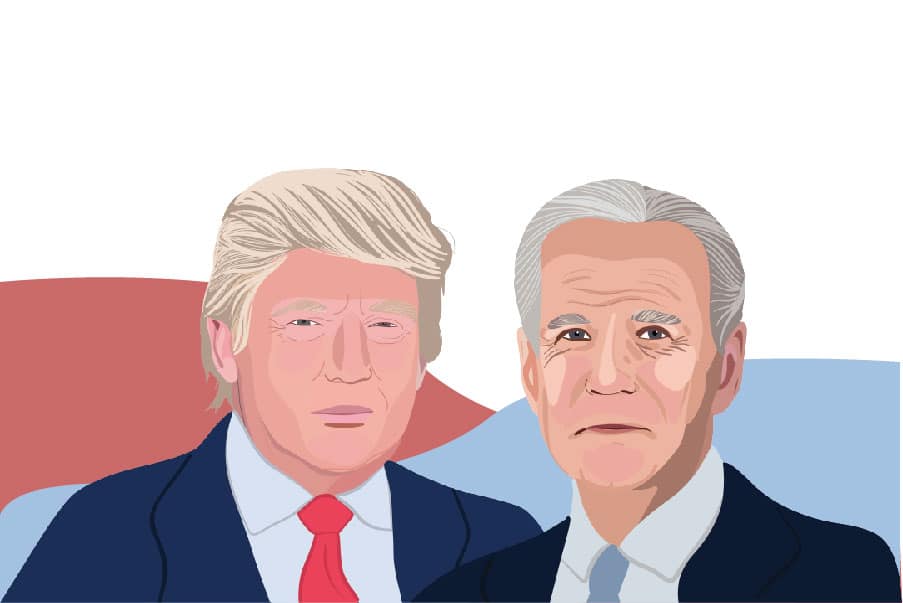 President Donald Trump and Former Vice President and Democratic Nominee Joseph R. Biden Jr. participated in the first presidential debate of the 2020 election on Tuesday, Sept. 29. The 90-minute debate was moderated by Fox News anchor Chris Wallace and was held at Case Western Reserve University in Cleveland, Ohio. While the two presidential candidates shared a cordial welcome at the start of the evening, it did not take long for the gloves to come off.

Trump and Biden tackled a variety of issues, including the Supreme Court vacancy, COVID-19, the economy, racial injustice, the candidates’ records, climate change, and the integrity of this year’s election. The evening was memorable for Trump’s constant interruptions, Biden’s name-calling, and Wallace’s attempts to keep the two candidates under control. At several points, the debate descended into chaos, with all three men talking over each other at the same time.

“Will you shut up, man?” Biden said, after one of Trump’s interruptions. “It’s hard to get a word in with this clown.”

The debate performance was particularly concerning for the Commission on Presidential Debates (CPD), as they released a statement on Wednesday saying that Tuesday’s debate “made clear that additional structure should be added to the format of the remaining debates to ensure a more orderly discussion of the issues.”  The CPD is a nonprofit corporation that sponsors and produces the televised presidential debates.

In particular, Trump took aim at Biden’s intelligence, each of Biden’s two sons, and Biden’s record as a politician.

One of  Trump’s overall messages to voters focused on the “booming economy” from his first three years as president and his success in rebuilding that economy back from the COVID-19 recession. In reference to what a Biden presidency would look like, Trump repeatedly suggested that Biden would be controlled by the “radical left,” and often conflated Biden’s proposed policies with those of other prominent Democrats.

Biden returned fire with his own evaluation of Trump’s record, calling him “the worst president America has ever had.” Likewise, Biden blamed Trump for the COVID-19 pandemic, accused Trump of divisive rhetoric, and suggested that Trump’s elitism renders him unable to sympathize with the average American. Unlike Trump, Biden delivered some of his most passionate pleas right into the camera, speaking directly to voters.

At several points, both Trump and Biden dodged pointed questions from Wallace about controversies surrounding their respective platforms. Biden would not indicate whether or not he would consider adding Supreme Court justices if elected, while Trump pivoted away from unequivocally denouncing white supremacy.

One of the biggest questions surrounding this election has been the actual voting process, as COVID-19 will be forcing more Americans than ever to vote by mail. While Trump insisted that voter fraud is already happening and will jeopardize the legitimacy of the election results, Biden assured viewers to have faith in the vote-counting process.

With the debate being held just 35 days before the election, nationwide polling has consistently shown Biden leading over Trump. However, many political pundits point to the 2016 election that looms as a reminder that polling should not be treated as a foolproof source for predicting election outcomes.

Chairman of the history and political science department Dr. Steven Breezeel does not expect for this first debate performance to have a major impact on either candidate’s current standing in the race.

“It was a highly combative atmosphere where I doubt either candidate was able to gain significant ground with the voters,”  Breezeel said. “Undecided voters will probably have been disturbed by the entire event and not especially drawn to either candidate.”

Reactions from those who watched the debate have indicated frustration and disappointment over the candidates’  behavior.While such discouragement is understandable, it should not necessarily come as a surprise, according to junior Davis Threlkeld, chairman for the Harding Republicans.

“We have seen a hyper polarization of politics and that was on display,” Threlkeld said. “But the debate was not the first fracturing of political discourse, it was the product of that system.”

Associate professor of communications Dr. Jim Miller said the debate showed what kind of leadership the country is missing.

“I have never felt more strongly that our society needs better models for how to debate someone who disagrees with us,” Miller said.

The next debate will be between Vice President Mike Pence and Senator Kamala Harris on Oct. 7 at 8 p.m. CST. Trump and Biden won’t take the stage again until Oct. 15 in a town-hall style debate.