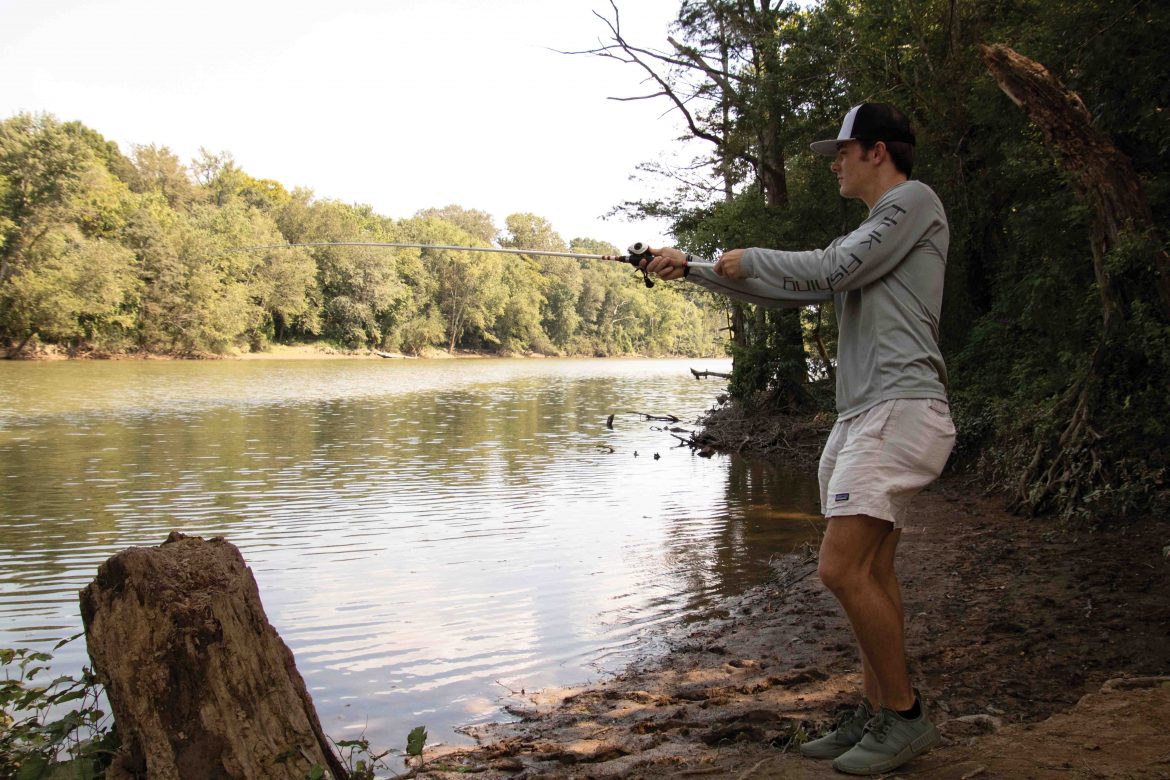 The Harding  fishing team offers students an opportunity to relax without a television screen, and the chance to compete in collegiate athletics without shoulder pads.

Since 2009, the team has competed against numerous anglers in the country.

“When we compete, we compete with F.L.W. (Forrest L. Wood Division) in what is called the ‘Southern Region,’ and it’s a number of states,” sponsor David Collins said. “It’s Arkansas, Louisiana, Texas, Oklahoma, and I think it gets even to Arizona and New Mexico, but every single college and university in those states can field a team.”

With the competition having no classification, opponents range from small community colleges to Division I programs, such as Texas A&M and Louisiana State University.

For freshman prospect Braden Smith, his competitiveness never fades when he puts a line in the water, he said.

“I really just enjoy fishing competitively,” Smith said. “Whenever I go fish, I’m pre-fishing trying to find new spots, scanning for structure on the bottom. I’m always looking for stuff that will help me in competitions.”

Smith also said that his competitive fishing career grew from a love of fishing with his grandfather.

“I’ve always grown up with my grandfather fishing, and we always just crappie fished and fished to eat,” Smith said.

Harding fishing allows students to take a hobby or sport that they loved as kids, and compete with people across the country who share the same interest.

“I think it’s pretty cool that there’s a fishing team here,” senior Tyler Turner said. “I wish I had known about it sooner — I mean I’ve always loved fishing. I’ve never fished in competition before, so that would be interesting.”

In the past, the team has received awards and won competitions, and Collins said he is hoping to further these successes in the future.

“The very first team, we had two guys who competed, and they actually won prize money in the tournament early on, and so we’ve always had success,” Collins said. “We had two guys who were very successful in the last four years, but they’ve graduated. And so this year, we’re looking to add to the legacy.”

In addition to offering ways to fish competitively, Collins said it also serves as an organization for those interested in fishing.

“The other aspect of HU fishing is a special interest, student-run organization,” Collins said. “Some of the things that would be a part of that would be meetings, activities, outings — perhaps in those meetings special guest speakers, professional fishermen. We have some tremendous fishing opportunities close by with the Little Red River. So just sharing the messages, sharing the opportunities, building interest in fishing, sharing information to those who love to fish, but maybe don’t know where to fish around here — those would be some of the things that we would want to do.”