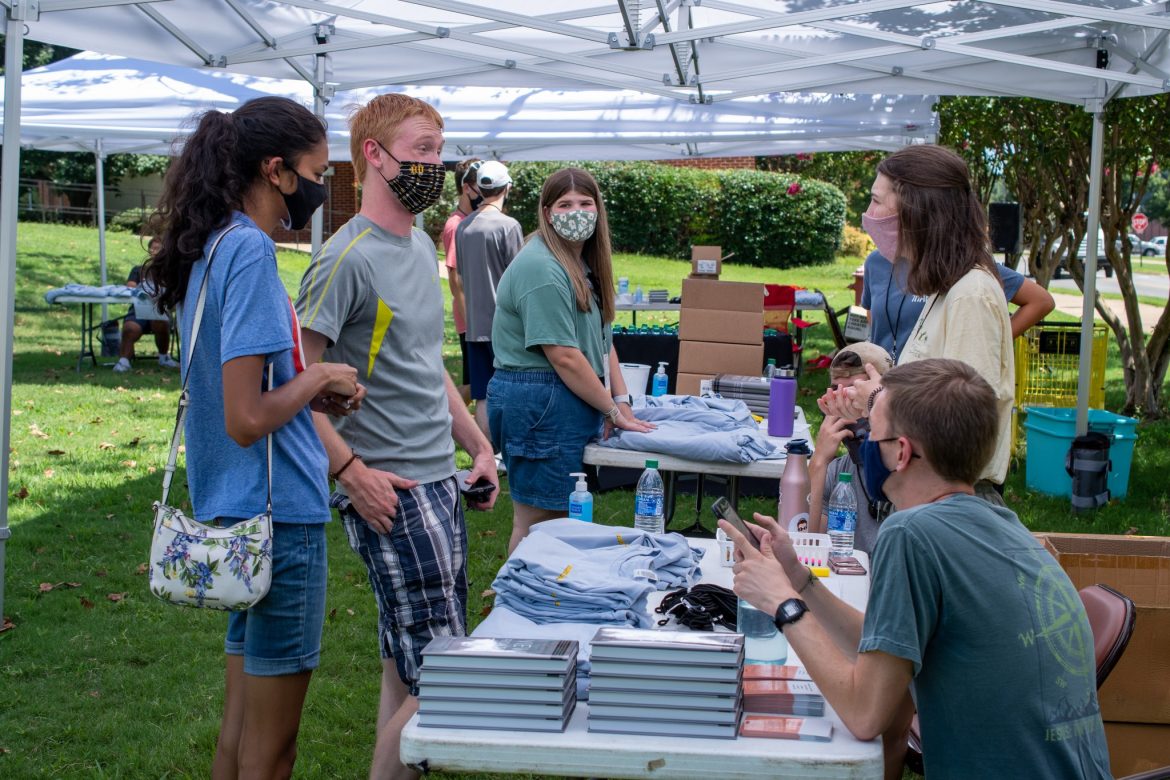 Changed plans are an ongoing theme of 2020, and Harding freshmen orientation was no exception. This year Stampede (formerly known as Impact) began Monday, Aug. 17, and contained several adaptations from previous years.

On top of the typical logistics of move-in week, the University had to plan for socially distanced move-in times for over 800 new students. The incoming freshmen were allowed to move into the dorms Monday through Thursday, each student choosing a day and a two-hour time slot to move in. Upon arrival to their dorms, the students and two helpers were required to have their temperatures taken before entering the building. This was similar to the procedure students followed while moving out of dorms after transitioning to remote learning in March. This was the first of many changes to the typical schedule for the beginning of the school year.

Directing Stampede is never simple, but for the co-directors this year, juniors Everett Kirkman and Ethan Brazell, it was especially convoluted.

“We knew that everything would be different at the beginning, and it was, but we wanted to make sure the freshmen still felt just as at-home at Harding as we did during our Stampede,” Brazell said.

The pair set off on the job with the mindset of trying to keep everything as normal as the years before. The co-directors faced the hard reality that the familiar was no longer possible.

Despite changes, the co-directors still encouraged freshmen to meet as many of their fellow classmates as possible.

“Just having to keep up with the masks and not being able to interact with people like normal was hard, but, also, I understand that it isn’t Harding’s fault, and it’s just something the world is going through so I’m not too bothered by it,” freshman Logan Kelly said.

Brazell and Kirkman decided to break all of the students into four color groups in addition to the energy groups used in the past. Each energy group had a maximum of 15 members, including upperclassmen volunteers. The color groups had around 15 energy groups, resulting in around 200 people per space. The groups were designed so each would be able to have a different schedule, thus creating the space needed to keep the students apart. During each event the students were directed to keep their masks on at all times and remain socially distant. This meant careful placement of chairs and tables and roping off rows in the auditoriums.

New students attended themed dinners, a service project and HU Spectacular, which are all staples of Stampede. The hypnotist is also a student favorite, and this year the show was divided into four different times based on the color-coded groups for students to attend. Kelly said being split in groups did not affect her experience.

“My favorite event was by far the hypnotist,” Kelly said. “That was the funniest thing ever.”

Along with coordinating the 175 upperclassmen volunteers, 823 incoming students and materials needed for these events, the co-directors had to find ways to create enough space for the students to stay six feet apart to follow state mandates.

“In years past the most stressful thing is how many moving parts there are; there are a million things going on at all times,” senior Lindsey Bender, former director of Stampede, said.

Brazell and Kirkman had to be creative with every activity during Stampede, not relying on past examples to make their plans.

“I can’t imagine having to do everything that has to be done and make sure everyone is wearing masks and social distancing,” Bender said. “They had to overcome a lot of obstacles that have never been overcome before.”