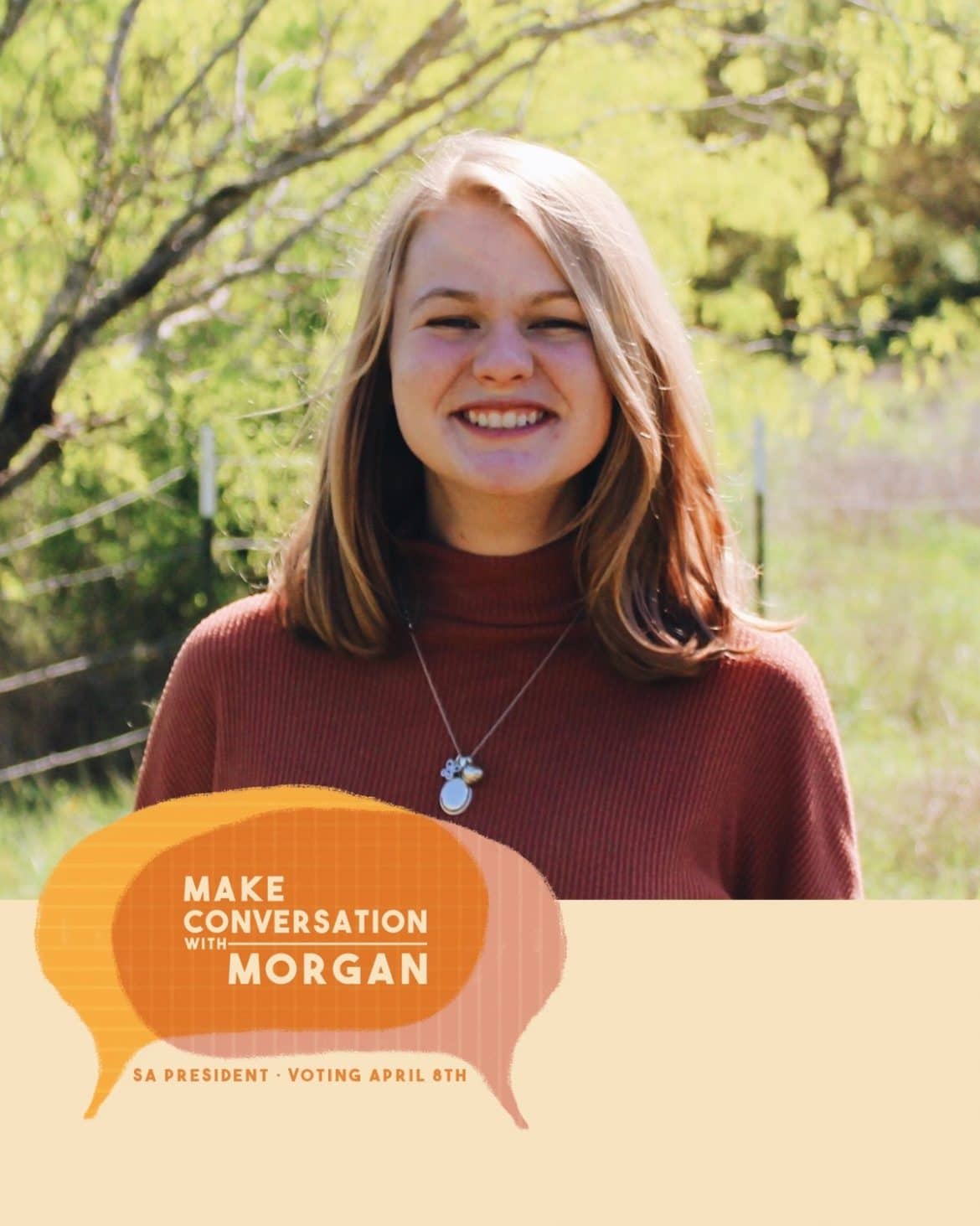 Junior Morgan Proffitt ran unopposed for the Student Association (SA) presidency and was elected April 9 for the 2020-2021 school year, making Proffitt the fourth female SA president in Harding’s history. Proffitt’s female predecessors include Susan Brady in 1977, Susan Vaughn-Hassman in 1990 and Hallie Hite in 2018.

Due to most students living off campus during the election, Proffitt — and others who ran for SA positions — relied heavily on social media to campaign. Proffitt posted on Instagram to announce she was running for SA president.

“Even from my bed at home, I am excited to announce that I am running for SA president,” Proffitt said. “I am so thankful for the opportunity to serve Harding’s student body in this way, and I pray I can honor the lovely, funny, beautiful community we get to call home.”

Having to participate in a virtual campaign was not something Proffitt anticipated. She was not able to give a speech in chapel like usual, so she instead gave a speech through the SA’s Instagram TV (@sahardingu). Proffitt said she was excited to have the opportunity to share her ideas with the student body.

“While it was frustrating to not be able to have face-to-face conversations with people like in usual elections, what a blessing to be living in a world as interconnected as ours,” Proffitt said.

Proffitt campaigned beside the newly elected SA vice president, senior Jacob Taylor, as well as sophomore Bennett Holloway, who was elected SA treasurer. The name of their campaign was “Make Conversation.” Proffitt said the concept of this theme is based on everyone having a seat at the table, encouraging students, faculty, staff and administration to begin building relationships and communicating to avoid misunderstandings.

“The role of the SA is to be a voice advocating for the needs and desires of the student body and working to develop relationships so that those needs can be addressed,” Proffitt said. “I hope next year’s SA can continue developing relationships previously established as well as create new ones.”

SA sponsor and assistant professor of mathematics Jill Davis said she believes Proffitt has many characteristics that will make her a good president.

“Morgan has organized several of the SA events this year and is a very talented leader,” Davis said. “She has good connections on campus and understands the role of the SA. Her ability to listen and work well with others makes her well suited for the role of SA president.”

Proffitt said, though the future is uncertain, she is preparing for the fall semester and has community-oriented goals in mind. One of her main ideas is to provide students with the option of alternative chapel experiences.

“[I] hope to work with different groups and organizations on campus to develop alternative chapel experiences for students,” Proffitt said. “By creating more intimate gatherings, I hope the SA can encourage a spirit of authenticity and honest fellowship within smaller groups of people.”

Junior Maddy Hall has been in a weekly devotional with Proffitt and said she is a bold and gentle leader.

“When she sees an opportunity for improvement or service, she courageously takes the initiative she needs to while looking people in the eyes with kindness every step of the way,” Hall said.

Proffitt has been an involved student on Harding’s campus and will continue to be a leader next school year.

“I hope to serve the student body by first and foremost being a listening ear and compassionate heart,” Proffitt said. “I hope that I and the other SA officers can all work to discover and advocate for the needs of the students while seeking to develop programs and policies that grow us all into better women and men of Christ.”

Since Proffitt is the fourth female SA president — and the second within three years — Hall said people are beginning to notice the magnitude of leadership the women of Harding have to offer.

“The presence of female leadership is nothing new to Harding,” Hall said. “In countless classrooms, offices and dorms on our campus, women are leading in the love of Jesus … Female leadership during my time at Harding has made me bolder. Morgan Proffitt called me out of timidity when I was a freshman, and women like her have taught me what it means to bravely speak life into people. That kind of boldness has transformed my life and faith.”

Proffitt said she is honored to be a part of Harding’s history with Brady, Vaughn-Hassmann and Hite.

“Because of the hard work of so many before me, the world continues to grow into an ever inclusive and equitable place, and I hope the trend of women being in positions of power can continue not just at Harding, but all throughout the world,” Proffitt said. “I pray I can hold this position in a way that honors all those who have held it before me.”