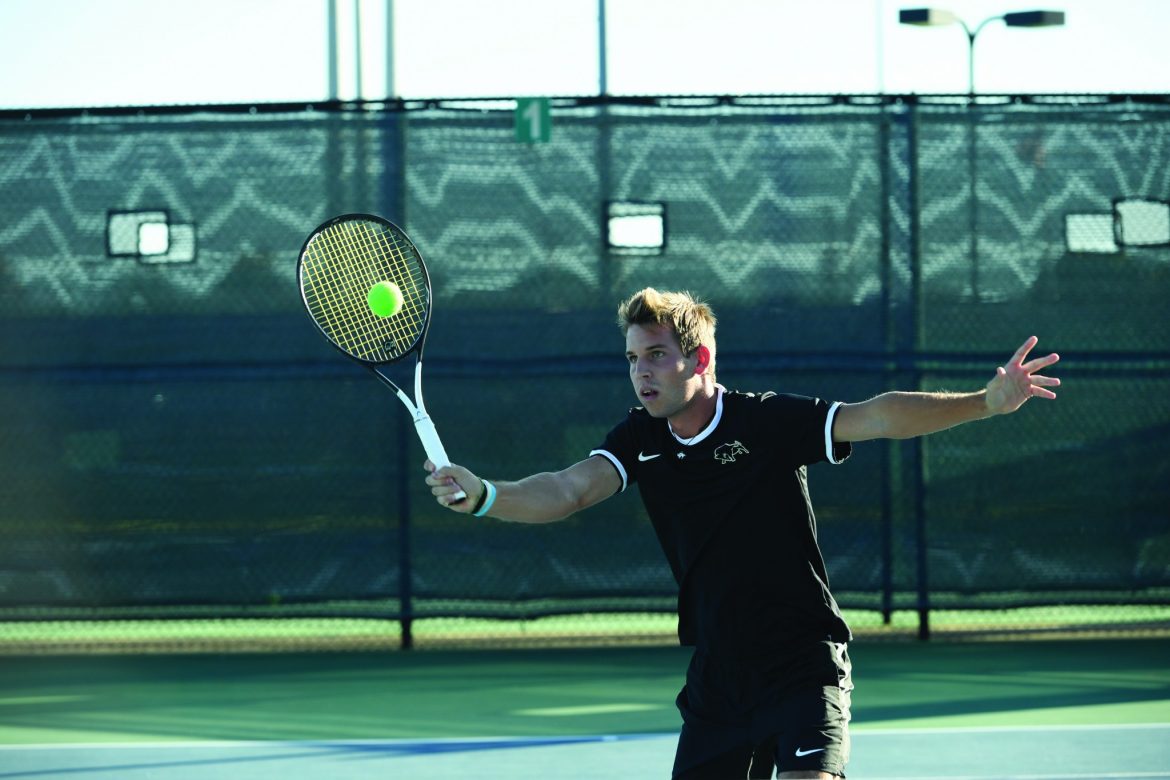 The men’s tennis team defeated University of Montevallo last weekend, improving their record to 6-0 for the spring season. The victory came one week after the team upset Midwestern State University, which was ranked No. 15.

According to David Redding, head tennis coach, extra motivation for success during the spring season settled into the team due to an unexpected circumstance. Alejandro (Alex) Sendra, who served as senior team captain during the fall and was recently named to the Great American Conference All-Decade Team, was unable to return to Harding after the holiday break due to health concerns.

Redding said the team has worked to make adjustments after returning in January, all while keeping their teammate Sendra on their minds.

“When we found out that we were going to be losing him for the season, normally you’d think, ‘Oh, everybody’s going to kind of fall apart,’ and think, ‘We’ve lost one of our top players,’” Redding said. “But in fact, just the opposite has happened. Everybody kinda rallied around and said, ‘Hey, we’re going to step up. We’re going to dedicate this season to Alex.’”

Junior Morgan Salvan played with Sendra as a doubles’ partner for the past two years. The two had been nationally ranked as doubles partners.

Salvan has been playing doubles with sophomore  Alvaro De Lorenzo  this  semester, beating their Montevallo opponents 7-5 last weekend. It was the fourth win out of five for the pair.

Senior Luis Tirado, team captain, said the team has started to hit its stride through recent weeks, especially after defeating Midwestern State. He said he thinks they have begun playing more as a team than as individuals.

“We started a little bit low, I think, getting back to the rhythm of how we ended the last semester,” Tirado said. “What I think helped the most is, even though we weren’t playing our best in the first matches, the attitude and the desire to keep fighting.”

That desire to keep fighting is what Redding said has already made this season a success. As a team, Redding said they focus a lot on attitudes, particularly on what he called a champion mindset. Watching his players work to honor Sendra has already impacted Redding’s view of the year.

“You know, whether we win or lose — however we finish the season — it’s already been a great season just seeing the guys come together for a purpose higher than themselves in dedicating this season to Alex,” Redding said. “I have a feeling we’re going to do really well this year.”

The men’s tennis team will play No. 20 ranked Drury University in Springfield, Missouri, tonight. Their next home match will be Feb. 21 against Blue Mountain College. As the team continues through their season dedicated to Sendra, both Salvan and Tirado agreed that one of the things they want most is support from their peers and classmates.

“I know American culture is more about basketball, football, volleyball, but tennis is also a tough sport,” Tirado said. “We always try to represent Harding the best we can, and we need more support, like for people to come watch our home games. We’d like people to come watch us and support us.”