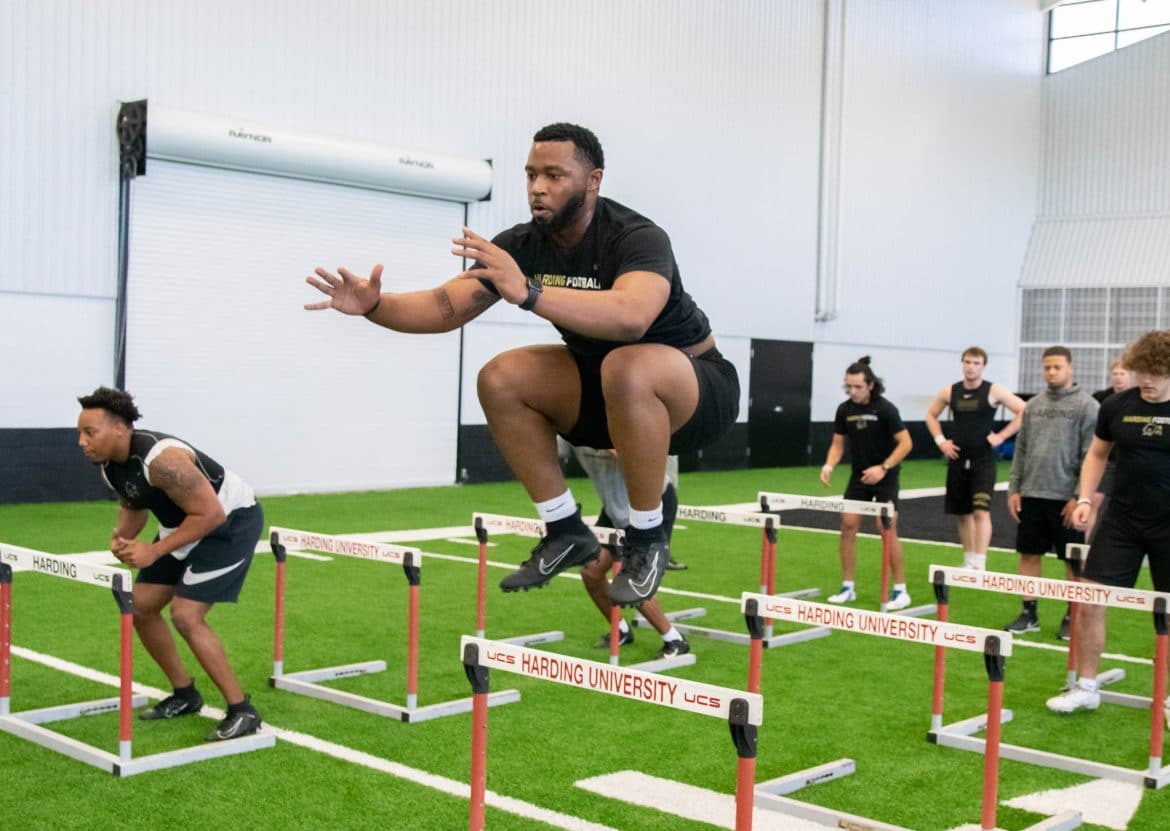 Obviously it's hard, and it takes up your time, and you gotta want to do it, but it's more of a joy, I'd say, than a job.

All 14 of Harding’s sports programs are different, and all require various amounts of work from each of their student athletes. But what is seen during the regular seasons is just a product of the work that goes into the off-season. Every year, athletes spend time training and working almost year-round to be ready for their sports’ respective season.

Senior Thomas Barbara, a pitcher for the baseball team, said a big part of preparing for their season is playing against each other. They have regular scrimmages and workouts, making sure to mentally prepare for each game.

“The biggest thing is just showing up and being there all the time,” Barbara said.

Barbara also said coming back from winter break, and going straight into practices can be challenging.

“You know, getting back into the swing of things — it’s been a bit of a process,” Barbara said.

Junior Dalton Allen, offensive lineman for the football team, said the team trains regularly during off-season. He said during “spring ball,” which is about four to five weeks of practicing, coaches evaluate the players’ performances. Allen said it allows players and coaches alike to rebuild as a team.

“Once it comes to the regular season, we know who to trust, who not to trust, and who we can count on and not count on,” Allen said.

Junior wide receiver Michael Cendrick said there is no real time off for players. Off-season consists of continuous training, and is beneficial for keeping skills.

“When we don’t have those five weeks of ‘spring ball,’ we have training Monday through Friday,” Cendrick said.

Weekday training occurs in the afternoons, Cendrick said, except for Wednesdays, when the team heads to the field around 5:30 a.m. for conditioning and practice.

Allen said preparing mentally is just as important as staying in shape. Repetition is key, and conditioning helps allow the student athletes to be ready for their season.

“It builds character in a way,” Allen said. “You become mentally tough, and when it comes to the regular season, you’re able to play it back in your head; ‘I’ve done this, and I’ve worked so hard for how ever many months,’ and in that moment, you’re prepared for it.”

Team bonding allows athletes to work well together, and grow stronger with one another, Cendrick said. One activity the team takes pride in is spending time with possible recruits. Cendrick said he enjoys taking out possible new team members for things like bowling, dodgeball and workouts. Cendrick’s favorite event, he said, is the big camping trip, where teammates fish, grill, take float trips and spend time together.

Cendrick said that while being a student athlete does take a lot of work, he enjoys it and loves being a part of a team.

“A lot of people say college football is a job,” Cendrick said. “Obviously it’s hard, and it takes up your time, and you gotta want to do it, but it’s more of a joy, I’d say, than a job.”