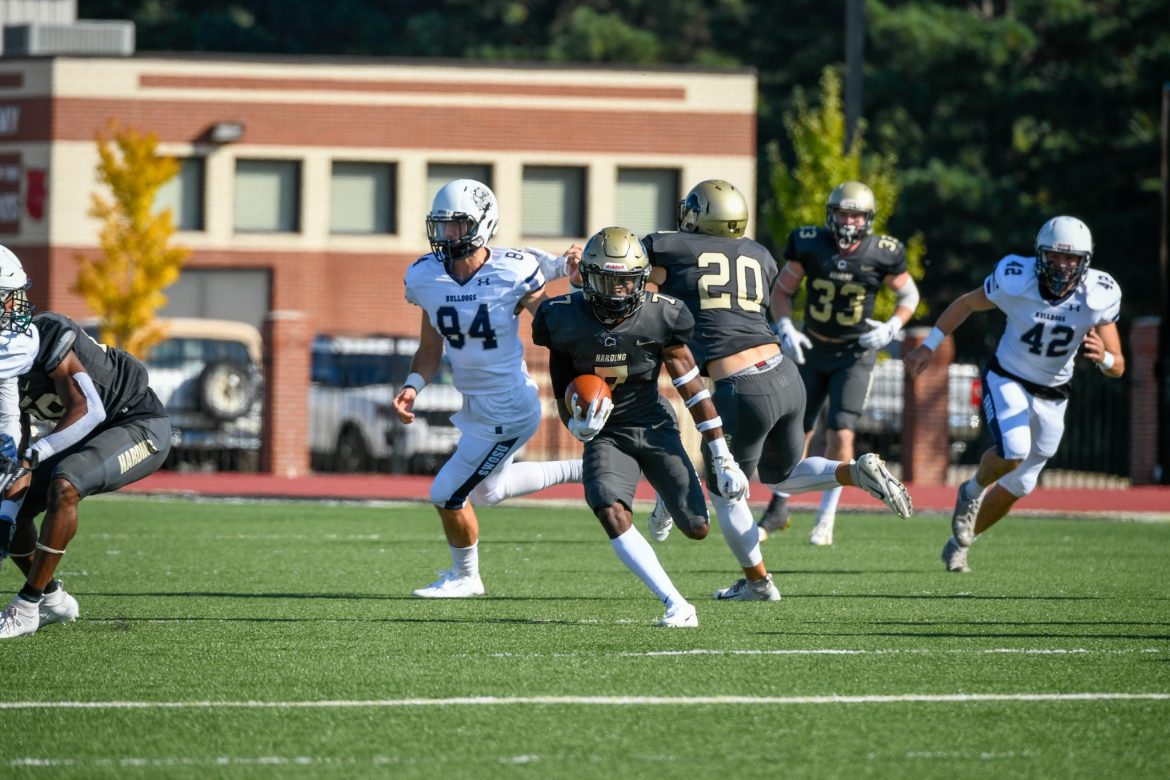 The Harding Bisons made it to the playoffs this season for the fourth consecutive year. While the team prepared for playoffs, senior Harding players were prepared for their last college football game.
The playoffs marked the end of the 14 seniors’ college football career. For some of these seniors, the last games were filled with emotion and bittersweet feelings. Senior defensive end Jordan Allison said his four years flew by, but he couldn’t be more grateful.
“It’s kind of surreal for me,” Allison said. “I’ve been on the team for so long, but it’s been such a blessing looking back. It’s sad, but I’m also happy.”
The Bisons completed their regular season with a 10-1 record, which was their best record since 2016. Senior linebacker Chris Wein said their success throughout this season was due to Harding’s culture and the football program’s brotherhood.
“Everyone loves each other,” Wein said. “We play for each other, and I think our wins are a testament to who we are.”
Wein also said that playing for Harding has made him a better person.
“It’s made me more selfless,” Wein said. “I am surrounded by people that look out for you and keep you accountable, and they’ve made me a better teammate.”
While the first game this season was a loss, the Harding football team saw a streak of 10 consecutive wins, leading them into the playoffs and placing them at No. 14 in the nation for Division II, before falling to Northwestern Missouri State in the first round.
Both Wein and Allison said they believe being at Harding has changed and blessed their lives for the better.
“All I can say is thank you,” Wein said. “Thank you for the opportunity to keep playing, to be in this culture, to be at this school and to get a different life experience than any I’ve ever had.”
Many underclassmen teammates see the void that is going to be left once the seniors graduate, but they view it as an opportunity to grow and follow in these men’s footsteps. Freshman defensive lineman Seth Selby said that although the seniors will be missed, he knows the team will look forward to greater accomplishments.
“It’s going to be hard,” Selby said. “But it’s going to be up to us to hold true to the brotherhood and keep their legacy.”
The Harding Bisons fell to the no. 10 ranked Northwestern Missouri State in the first round of playoffs 6-7 on Saturday Nov. 23.
Harding’s defense stood strong against Northwestern offense as they held them to only one score, although Northwestern Missouri State had averaged 46 points through the rest of its season.
Northwestern was also held to only 205 yards of total offense. This was achieved through 10 tackles for a loss, five of those tackles being sacks.
Harding finished its season 10-2, with its fourth straight playoff appearance. The Bisons look to have more appearances in the future.