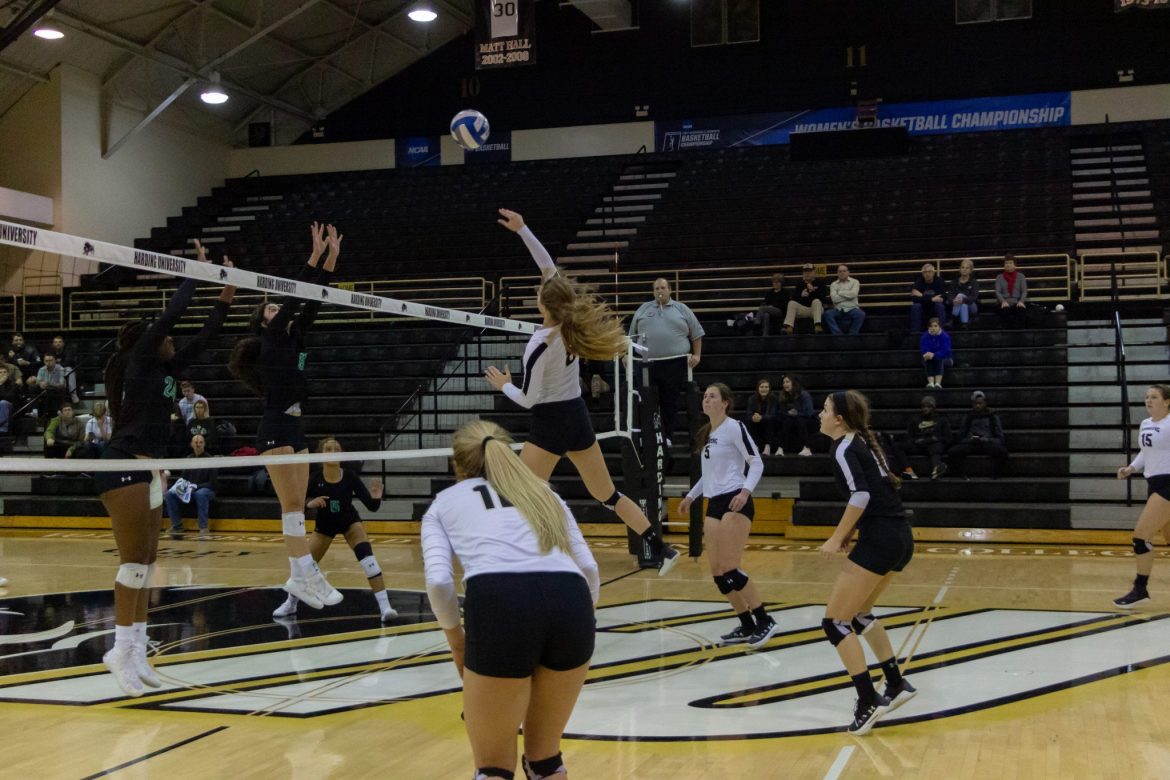 The Lady Bison volleyball team swept Arkansas Tech 3-0 Tuesday to clinch their fourth straight win in a row, putting their overall season record at 19-9. It also marked their third straight sweep after beating Arkansas Monticello and Ouachita Baptist 3-0 as well. The team is currently tied with Henderson State for fourth place in the Great American Conference rankings, as of Nov. 13.
Head Coach Meredith Fear said she is excited to see what the team does with the rest of the season.
“I feel great that even with this young crew … that we clinched a spot in the conference tournament, which is awesome,” Fear said. “It has been a natural progression with this group, just into the complexities of volleyball, and I think that we are getting into the right spot at just the right time for conference tournament.”
Freshman defensive specialist Kinley Schnell, who has scored 39 points this season for the Lady Bisons, said the team is looking forward to playing at conference.
“We have worked really hard to get to this point, and we are excited to prove ourselves in the tournament.”
Junior middle blocker Annesly Young said the stress of school doubled with the stress of the upcoming tournament has impacted the team’s mentality.
“This is the point of the season with tests and breaks coming up, and everyone’s just mentally exhausted, but it’s a little bit easier to see now because the end is so close and the tournament is so close,” Young said. She also said the motivation to finish up the season well has helped determine the mindset the team has going into their upcoming games.
The team introduced nine freshmen to its roster at the start of the season, but has had great success. Schnell said she is very thankful for how her team has encouraged her to grow.
“My team challenges me in so many ways, and that is probably my favorite thing about them,” Schnell said. “They challenge me to do my best in all aspects of life.”
Fear said the dynamic of the team has changed this season with the addition of so many new players.
“I feel like as a coach, I’ve really embraced just their youthfulness and their dynamic, and it’s different, it’s definitely different,” Fear said. “They’re at their best when they are relaxed and goofy and having fun and … that’s new for me. It’s not goofiness out of lack of care, but it is out of true desire to do well, because they want that, but this is just how we’re gonna get there, and it’s different than how we’ve gotten there any other year, but now that we’ve accepted that, we really have hit our stride.”
This team’s strengths lie in its youthfulness and ability to adapt. Young said the energy of the team has made it easy to push each other in practice throughout the season.
“A really great strength that we have is being a well-rounded team,” Young said. “Everyone is able to contribute and make each other better at practice. We feel ready for any situation to just play our game well, so being adaptable is probably another one of our biggest strengths.”
The conference tournament is set to take place in Hot Springs, Arkansas, Nov. 21 through Nov. 23.