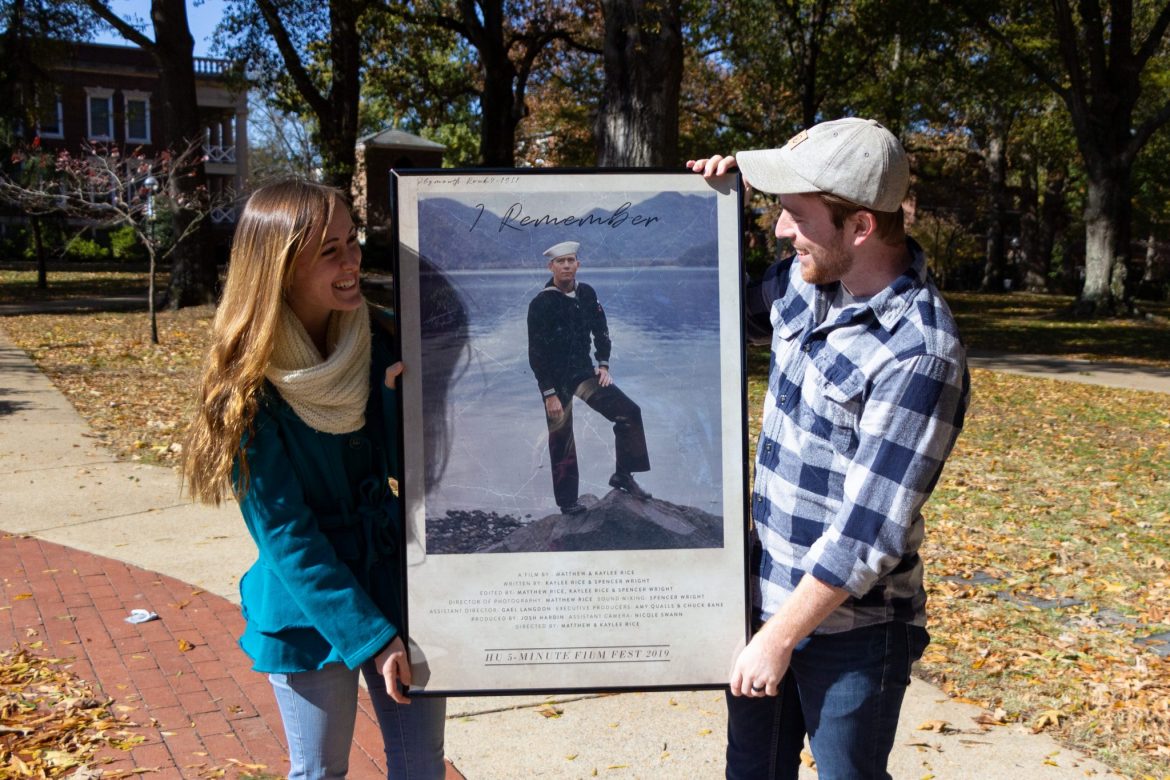 A story in the making for over 50 years finally got its chance to shine at the annual HU Five-Minute Film Festival Nov.1-2. Siblings, seniors Matt and Kaylee Rice, created a documentary, “I Remember,” about their family for their documentary filmmaking class.
The idea came about over the past summer when their grandmother, who had been diagnosed with Alzheimer’s disease, needed to be placed in memory care. The duo was organizing their grandmother’s attic when they discovered hundreds of Kodachrome photo slides. No one in their family knew about these. Many were unlabeled and dated back to when their grandmother was in high school during the 1950s.
Matt said it was interesting researching their family through these old photos and videos, and it connected him to his family. Passionate about film, Matt has completed many video projects.
“This is a very different project from anything I’ve ever worked on, just because it’s so personal,” Matt said. “Our grandfather died before Kaylee was born and when I was very young, and I have very vague memories of him, but it’s so strange to see a little bit of what life was like back then and to see what they were like back then. It’s so weird. It’s almost like it’s hereditary, because you see similarities between the way we are looking at them, and you see a little bit of yourself in a different person from another time.”
According to Kaylee, her and her brother’s shared love for film began during childhood.
“Film has always been Matt’s thing, ever since we were little,” Kaylee said. “Around [the time] when he was 12 and I was 8, our parents gave him a little film camera for Christmas, and [during] our whole childhood, Matt was always writing and making movies, and I was always kind of like his sidekick. I would be covered in fake blood for a movie, or I would hold the microphone or the lighting kit, so that’s always been our thing for our whole life.”
“I Remember” won multiple awards at the Five-Minute Film Festival, including Best Documentary and Audience Choice.
Co-writer senior Spencer Wright said it was an honor to work with both Matt and Kaylee. He also said the entire experience humbled him, and seeing their work on the screen during the festival made him very excited.
“When it was on the big screen, I got a little giddy knowing that this was a story to this point that hasn’t been told, and now it’s been compiled and put together in such a way that it can be shared through this medium of film,” Wright said. “That was a story that was waiting to be told, and I guess that is what documentaries and film are: They’re stories that are just waiting to be told, and documentarians are the ones that get to package it and give it.”
Matt and Kaylee plan to submit their family documentary to other film festivals in hopes of it having a run on the film festival circuit.