Home Features The man behind the mascot 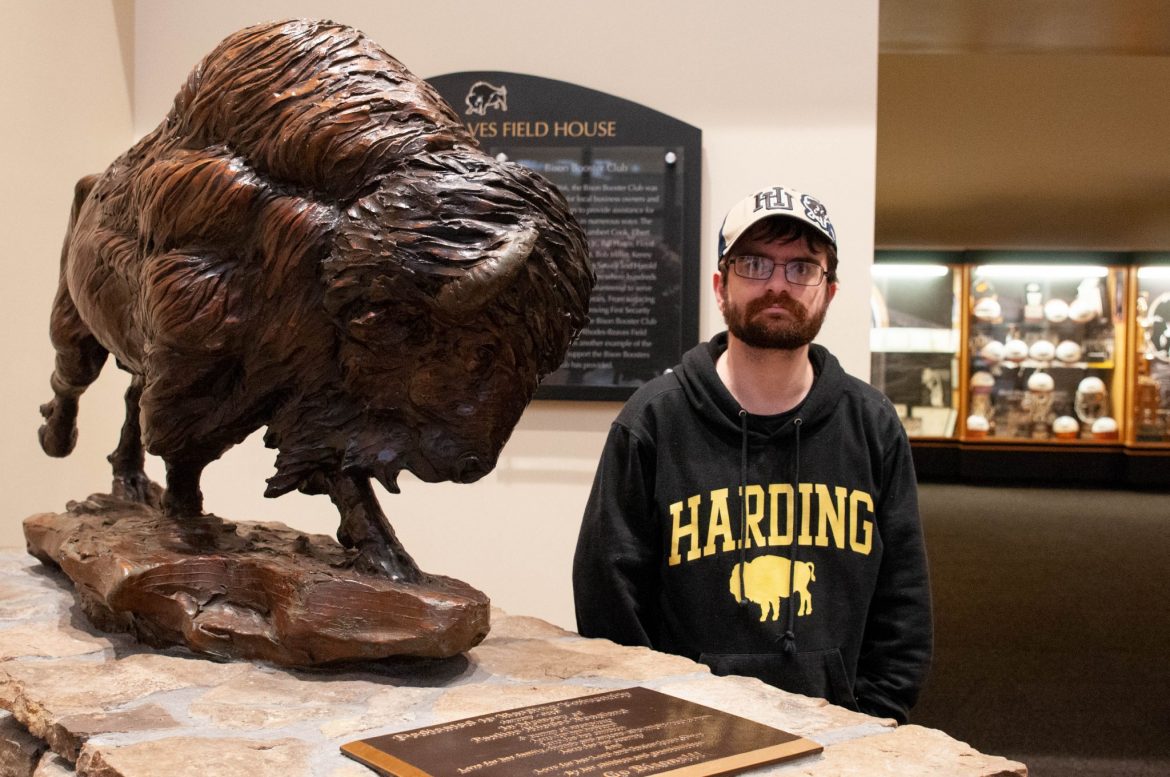 It’s another home football game in the September heat: Fans are cheering, football players are locked in and the crowd is getting tense. But there he is, Buff the Bison, withstanding the tremendous heat, encouraging fans to get on their feet, to cheer louder and to have as much faith in the football team as he does.
Students see him everywhere — at football and basketball games, during orientation and so many other events on campus. Fans see a funny, energetic bison ready to cheer on Harding’s athletic teams and stand with them through their victories and even their downfalls. Most people don’t know, however, that the man behind the mask has dedicated over half his life to being a mascot.
Senior Austin Dunning has served as Harding’s mascot, Buff, for almost 10 years and has challenged himself to be the most committed mascot Harding has ever had. Before Harding, Dunning served as mascot for Western Guilford High School in North Carolina, and Frederick Community College in Maryland. After not feeling complete at either of these places, the search for another school began. The road to Harding wasn’t easy, but Dunning said he believes that being Buff was his calling.
“I think this is what God wants me to do,” Dunning said.
Dunning was born 11 weeks premature and diagnosed with autism and attention deficit disorder. On his first day of high school, students threw Dunning into a trash can because he was different. Emotion overcame Dunning that night. With feelings of embarrassment, sadness and anger, an even more dominant feeling arose — determination.
“I was not going to be remembered as the kid who was thrown into a trash can,” Dunning said.
His journey of becoming a mascot began.
After trying out and making it as his high school’s mascot, Dunning realized this was what he was meant to do. Bringing joy and happiness into people’s life was his purpose. Fulfilling this task has not been easy, though, and has taken a toll on Dunning at times.
“My body can’t handle everything like it used to,” Dunning said. “It is catching up with me — being [a mascot] for almost 20 years.”
With all the sacrifices, however, comes reward. Being a mascot not only brings joy to others, but it also brings happiness and fulfillment into Dunning’s life.
Mascot handler and coach Robbie Dunning has been with Austin every step of the way. As his coach and mother, Robbie has seen firsthand how being Buff has changed Austin’s life.
“Buff doesn’t struggle with the same things Austin does,” Robbie said. “Inside the costume, he’s confident and doesn’t have to worry about being misunderstood. He is very comfortable as Buff.”
Although being Buff has played a significant role in Austin and his family’s life, he is still not sure how long he will continue to be Buff. He is a few years away from graduation, but moving on is still a constant thought he has.
“What bugs me the most is I don’t know who’s going to replace me,” Austin said. He hopes Harding will be able to keep the Bison tradition and Buff alive even without him here.
Even though the thought of not being Buff brings sadness to Austin, he continues to try to do what he does best — bringing joy to the lives of many. Junior cheerleader Kaci Mason sees firsthand how Buff lights up every game as she is cheerleading alongside him.
“No game would be the same without Buff,” Mason said. “Buff is a part of the Harding game day experience, and the fans look forward to seeing him.”
While the end may or may not be in sight, Austin continues performing as though it were the last time he played Buff.
“I’m taking it each game at a time, and I’m just enjoying what I have left,” Austin said.