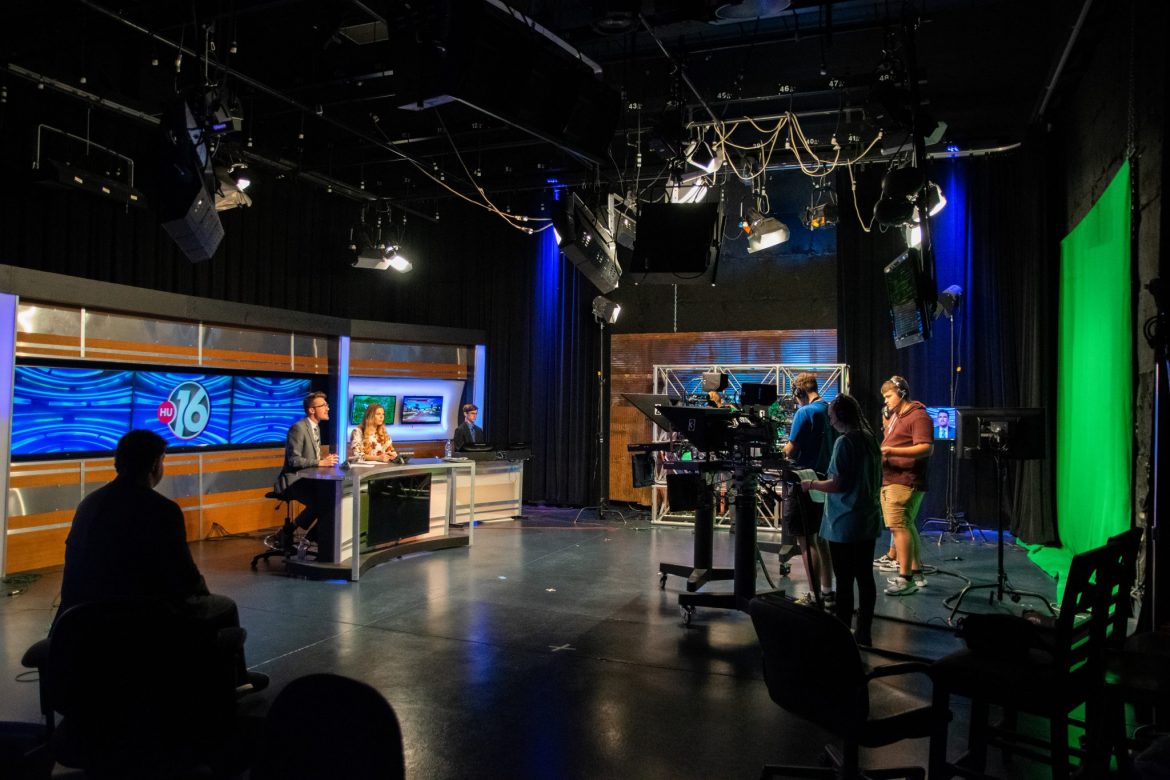 Harding’s student media network, HU16, covered all 10 volleyball games of the Harding University Invitational Tournament last weekend over the span of two days, which is the most the network has covered back-to-back. This was also the first time in many years that a Harding student was allowed to do the play-by-play commentary for a Harding game.
Junior Jackson Duncan has been with HU16 since fall 2018 and got the opportunity to call seven of the 10 volleyball games, including solo commentating one Harding match.
The original plan was for Duncan to assist Assistant Athletic Director Scott Goode for Friday’s games and then do the play-by-play for non-Harding games on Saturday. When Friday rolled around, Duncan sat in with Goode as the color commentator, and feedback was positive. The next day, director of HU16 sports coverage Tim Hamilton received a message from Goode offering Duncan the opportunity to commentate the Harding game. Duncan gratefully accepted and commentated the game solo.
“This volleyball thing was a step in a direction I really want to go,” Duncan said. “… I think I’ll look back at Tim Hamilton, and he’s going to be the person I think that really sparked this fire to do what I love, because this is why I came to Harding and why I chose broadcasting — was play-by-play … But that right there was the epitome of what I want to do in the future.”
Hamilton, someone who Duncan said he has looked up to since coming to Harding, said Duncan did extremely well in the role he was asked to fill with such short notice.
“He did a great job because he was having to do the play-by-play, watch live stats — to help him call the plays — and he also had his laptop and was pulling up information constantly from the other teams to try and get a little bit of background information that would help him as well,” Hamilton said. “So, you know, for someone to step into that role that’s different, the first time, and to do it so well with all of that information he was bringing in … I was just really proud of what he did.”
Goode said the partnership between HU16 and Harding Sports Information is beneficial for both programs.

“What we get is parents, family, friends and alumni can watch nearly every home event — wherever they are in the world,” Goode said. “We hear stories all the time about missionaries is China waking up at 3 o’clock in the morning to watch Harding football games, or a mom in Serbia who can watch her son play basketball.”
There were also other HU16 students involved in the tournament coverage, including two directors, three students working cameras and sophomore Dylan Johnston assisting Duncan in one of the games as well.
Both Hamilton and Goode said the experience these students are receiving through their work at HU16 will greatly benefit their future careers.
“It’s just that here you are learning, and mistakes are not as big,” Hamilton said. “If you’re doing them in this learning environment versus if you’re out there on the job, in a ‘professional world,’ there’s a little more pressure there. … I think students do a wonderful job within our program because they don’t feel that preasure.”