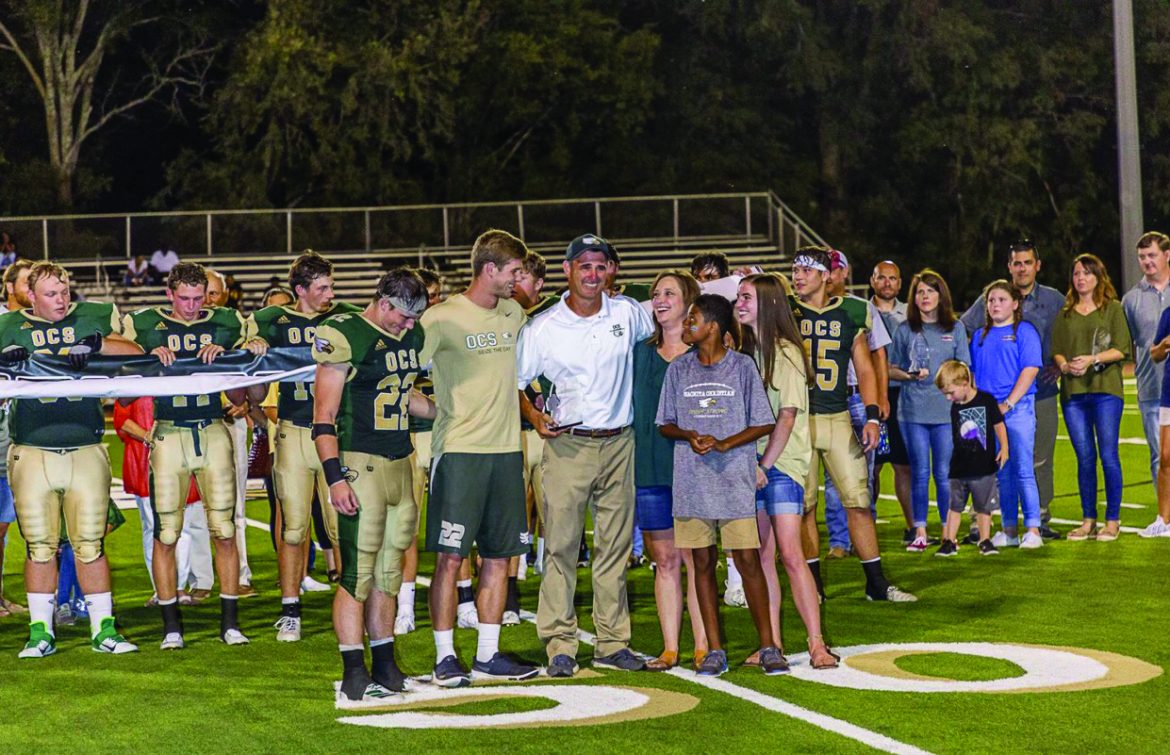 After serving as head football coach at the school for over 20 years, Fitzhugh was surprised with the news during the Sept. 6 game that the football field would bear his name.

“I was completely shocked, just totally caught off guard, when they announced at halftime that the school was naming the field after me,” Fitzhugh said.

Fitzhugh was accompanied by his family during the ceremony. Fitzhugh’s son, junior Grant Fitzhugh, who plays defensive back at Harding, traveled from Arkansas and was proud to stand beside his father. Grant graduated from OCS in 2017.

“I was really excited when I found out because he was just so deserving of it,” Grant said. “Getting a new turf field has been a 10-year process, and it’s been because of him that it all succeeded.”

The plans to honor Fitzhugh had been in the works for a while with only a handful of people knowing about it. The desire was to keep the event a surprise for the long-time coach.

“I found out on the Tuesday of the week of the game, and hardly anybody knew, but they told me so that I would come down,” Grant said.

Micah Harper, the previous head football coach for OCS and current president of the school, announced the new name for the field, and Fitzhugh said he could not have been more appreciative.

“It was definitely a humbling experience, I am so grateful. There have been so many people through the years that have contributed to make the turf field dream become a reality,” Fitzhugh said.

Son Will Fitzhugh also acknowledged that his father’s accomplishments made him deserving of this honor.

“It was incredible,” Will said. “He has done so much for OCS football, and getting the field named after him is more than fitting. He is a great man and an even better father. I was so proud of him.”

Fitzhugh began playing football at age 8. He said playing for Harding was also a blessing for him while he attended the University.

“Harding football helped me grow in discipline, courage and perseverance. Our coaches truly cared about us as people and not just as football players,” Fitzhugh said.

After graduating from Harding, Fitzhugh joined OCS as assistant coach for four years and then became head coach in 1998.

“It has been a great experience. I have been blessed through the years with a solid coaching staff,” Fitzhugh said.

Fitzhugh said that coaching at a Christian school has been very beneficial for him and those around him. “This has been a great experience for our family and has allowed us to spend a lot of time together,” he said.

His wife, Jana, and daughter, Ellie, have also supported him as a player and a coach.

“They have always been there supporting us at every game and just living the ups and downs that go with every football season,” Fitzhugh said.