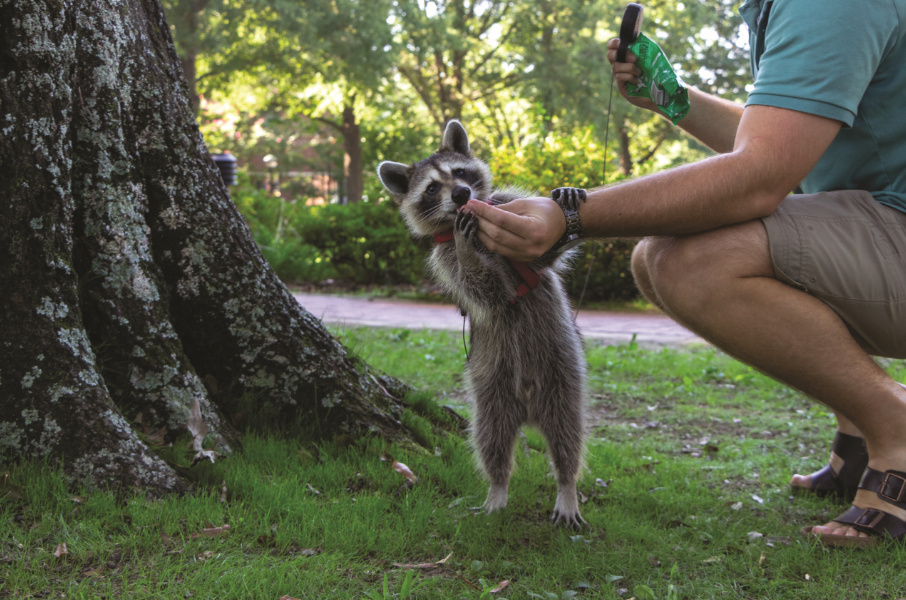 It’s about 4:30 on a Tuesday afternoon. The weather app says it’s 97 degrees, but you know better, and as you stroll past the Heritage Building, you can’t remember why you decided to come to Arkansas before November. Then you turn to look at the front lawn and stop hard. You rub your eyes, but you’re not having a heat stroke — that really is a guy walking a raccoon on a leash.

The guy? Nathan Mayes, a senior visual arts and leadership and ministry major.

Simon entered the picture when the Mayes’ neighbors found raccoons in their attic and brought them next door because of the Mayes family’s long history with animals.

“My grandad and mom, basically our whole family, has been rehabilitating animals for a long time,” Mayes said. “We’ve had all kinds of wild animals — owls, hawks, deer. Basically anything you can think of. We rehabilitate a lot of them and send them back out into the wild. We’ve acquired a lot that really can’t be set back in the wild and had some that we just kept as pets.”

This was the case with Simon.

When he was found, Simon’s eyes weren’t even open. Now, he’s about 6 months old, the size of a cat and as playful as – well – a raccoon.

“He’s kind of like a puppy that can climb walls,” Mayes said. “He plays with cat toys, and basically he likes to play with people more than anything.”

But how does one begin caring for a wild animal?

According to thesprucepets.com, raccoons are a lot like large ferrets or puppies but have characteristics that are still special to their species … always full of mischief.

“Many experts advise against keeping raccoons as pets, as they are difficult to tame and have health issues that are hard to manage,” thesprucepets.com said.

According to Mayes, the experience is vastly different from having a dog or cat. For example, a domestic animal may be caged for hours but still be excited to see its owner. Wild animals, on the other hand, are less forgiving. They require more research beforehand and increased attention, but the effort is worthwhile for Mayes.

“Honestly I have more of an appreciation for … God’s creation [due to having these animals],” he said. “I love seeing just how awesome he is, like creating these things for us to enjoy … I want to make sure animals are treated well. I guess having animals has given me a really big respect for them.”

Some of Mayes’ friends believe his pets have impacted their relationships.

“I’ll say we’ve definitely gotten closer because of the raccoon,” said junior Clayton Beasley. “We were already really close friends, so I’ll say just any other weird experiences like this will bring us closer.”

Mayes certainly doesn’t believe that his experience is for everyone. However, he does encourage others to be aware of animals in need.

“I think there’s tons of animals that need people to reach out and take care of them,” he said. “Anytime we see an animal hurt on the side of the road, we’ll … either take care of it ourselves or take it to a specialist. Anyone who sees that, I would encourage to stop and try to help them.”