Home Beginning to Endgame : Reflecting on the Marvel Cinematic Universe

Beginning to Endgame : Reflecting on the Marvel Cinematic Universe 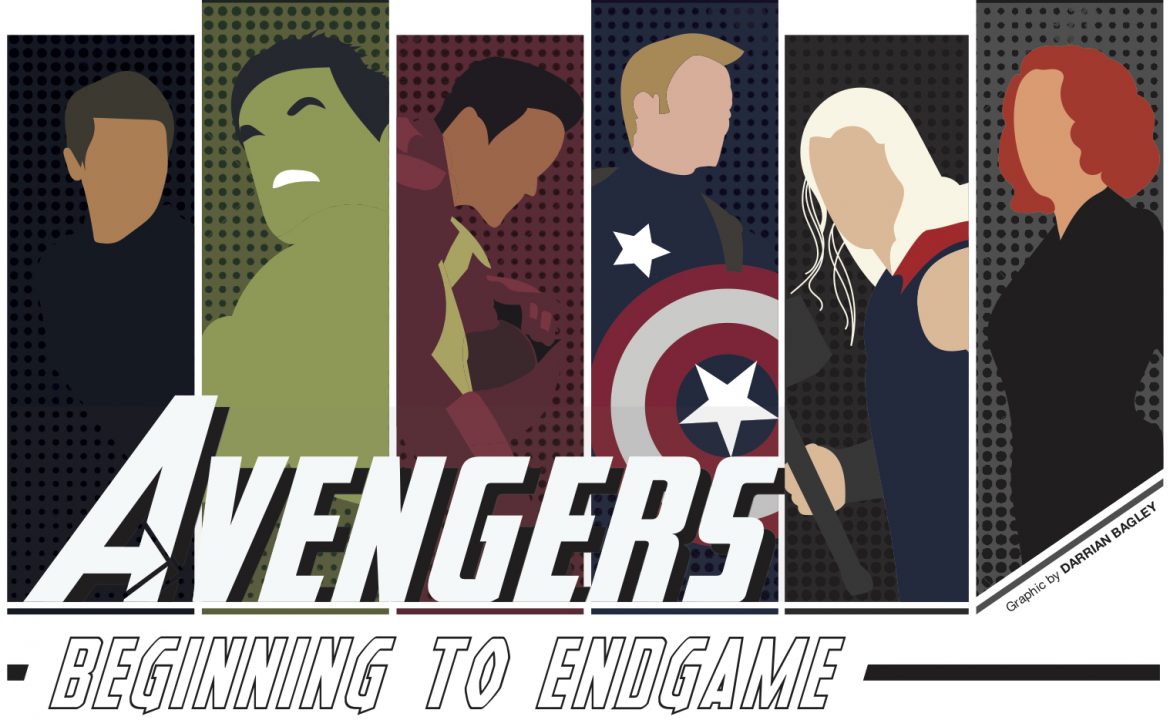 Today is arguably one of the most-anticipated days of the year: the day “Avengers: Endgame” comes out in theaters. Everything in the Marvel Cinematic Universe (MCU) for the past 12 years and 22 movies has led up to this grand finale.

The MCU began with “Iron Man” in 2008 paving the way for the Avengers to assemble for the first time onscreen in “The Avengers” in 2012.

For those of you who have managed to stay away from “Avengers: Infinity War” thus far, beware there are spoilers ahead.“Avengers: Infinity War”was one of the most ambitious cross-over events in history since “That’s So Suite Life of Hannah Montana” in 2006 on Disney Channel. The movie managed to combine different characters from a decade’s worth of movies into one giant crossover event.

The events of “Avengers: Infinity War” caused different characters’ storylines to cross paths such as Spider-Man, Black Panther and the characters of Guardians of the Galaxy. All these characters united under the Avengers in order to defeat the powerful Thanos.

Up until his appearance in “Avengers: Infinity War,” Thanos had been almost nonexistent, but a lot of the movies in the MCU hinted at his arrival to the franchise.Thanos was only mentioned a handful of times throughout the MCU, but never physically appeared onscreen until “Avengers: Infinity War.” Thanos’ one goal was to receive all six of the Infinity Stones. With all six of the stones, he would have the power to rule the entire universe.

Most movies in the MCU either hinted at or showed one of the Infinity Stones’ as part of their storyline. “Avengers: Infinity War” combined all of those storylines together for Thanos to collect all six Infinity Stones in one action- packed movie.

Once Thanos collected all six of the Infinity Stones, he wiped out half of the Earth’s population with one single snap of his fingers. The snap killed off major characters such as Spider-Man, Black Panther, most of the Guardians of the Galaxy team, Nick Fury, Doctor Strange and more.

This snap came as a shock to most viewers. Most viewers assumed the Avengers would be able to stop Thanos before the dreaded snap. However, Thanos managed to snap, and viewers watched one of the most heart-wrenching scenes in cinematic history as some of their favorite characters turned to dust.

“Avengers: Endgame” picks up right after the snap and chronicles what the remaining Avengers do in the wake of the death of their friends.The Avengers must decide whether to move on or find a way to bring back their friends.

Will the Avengers find a way to both defeat Thanos and bring their friends back to life? Find out today as “Avengers: Endgame” hits theaters.

The Best Way to Watch MCU Movies in Order

Class of 2019 | Graduating from the profession

Getting plugged in for Searcy summer