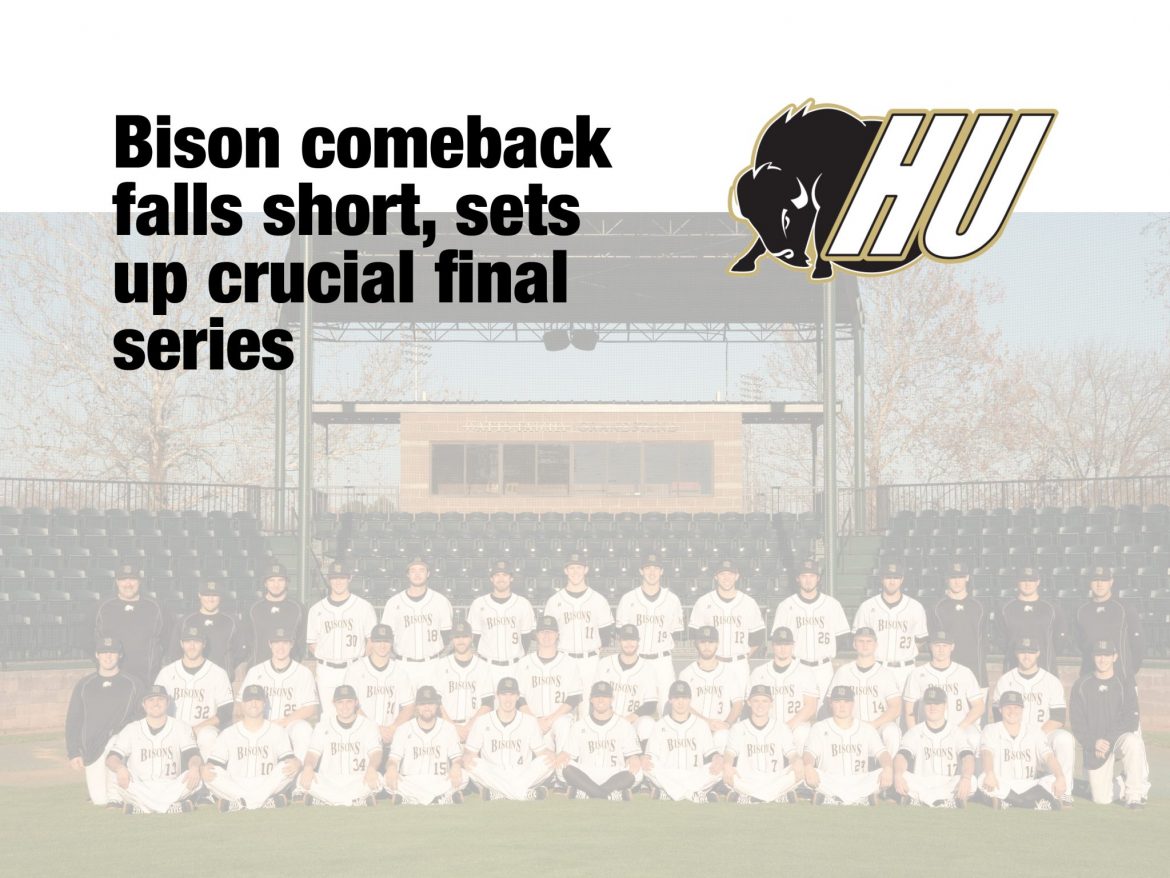 After falling to Henderson State University (HSU) in the first of a three-game series Friday, April 19, the Harding baseball team split a Saturday, April 20, doubleheader and lost the series 2-1.

Harding rebounded from its Friday night struggles to win the second game of the series 11-1, snapping HSU’s seven-game winning streak. With the win, the Bisons record improved to 28-17 overall and 17-12 in GAC games, putting them a game and a half ahead of Henderson.

Harding took an early lead in the first inning with two unearned runs after an error when HSU junior third baseman Daniel Colasanto dropped the ball before applying a tag on senior left fielder Nolan Fertig.

The Reddies scored their only run in the top of the seventh inning when senior right fielder Joseph Shepherd walked with bases loaded.

Harding went on to score twice more in the seventh inning and twice again in the eighth inning. The final run, scored by Butterfield, ended the game under the 10-run-rule.

This first game in the doubleheader followed a ceremony and photos honoring seniors for Senior Day.

“Senior day is always emotional,” Head Coach Patrick McGaha said. “We have such a good group of young men. They’ve really worked hard and done everything that they could help build our culture that to what it is now.”

Harding suffered a loss in the second game of the doubleheader with HSU in a close seven-inning affair. After making a comeback mid-game, the Bisons failed to pull ahead in the final innings, falling by a score of 5-4.

After both sides failed to put up runs in the first two innings, HSU took the lead in the third and scored four more runs in the fourth to extend the lead to 5-0.

Harding scored their first run in the top of the fifth when Humphreys hit an RBI double. Van Dover then grounded out to second, scoring Fertig, and Kelly followed with an RBI single to bring the game back within two at the end of the fifth inning.

Sophomore catcher Brendan Perrett drove in a run on a groundout in the sixth inning, but Harding could not push another run across. HSU closed out the series with a 5-4 win.

“On a weekend where it’s such a big weekend, we really needed to win the series,” McGaha said. “It makes it doubly tough. Moving forward we have a non-conference game on Tuesday, and we will take [Sunday] off and come back Monday and practice. And then we’ll have a big series with Arkansas Tech this weekend. If we can win that, then these seniors will get to play a little bit more. So we’re hoping to have them do that and make the tournament.”