Home Sports Take me out to the ball game

Take me out to the ball game 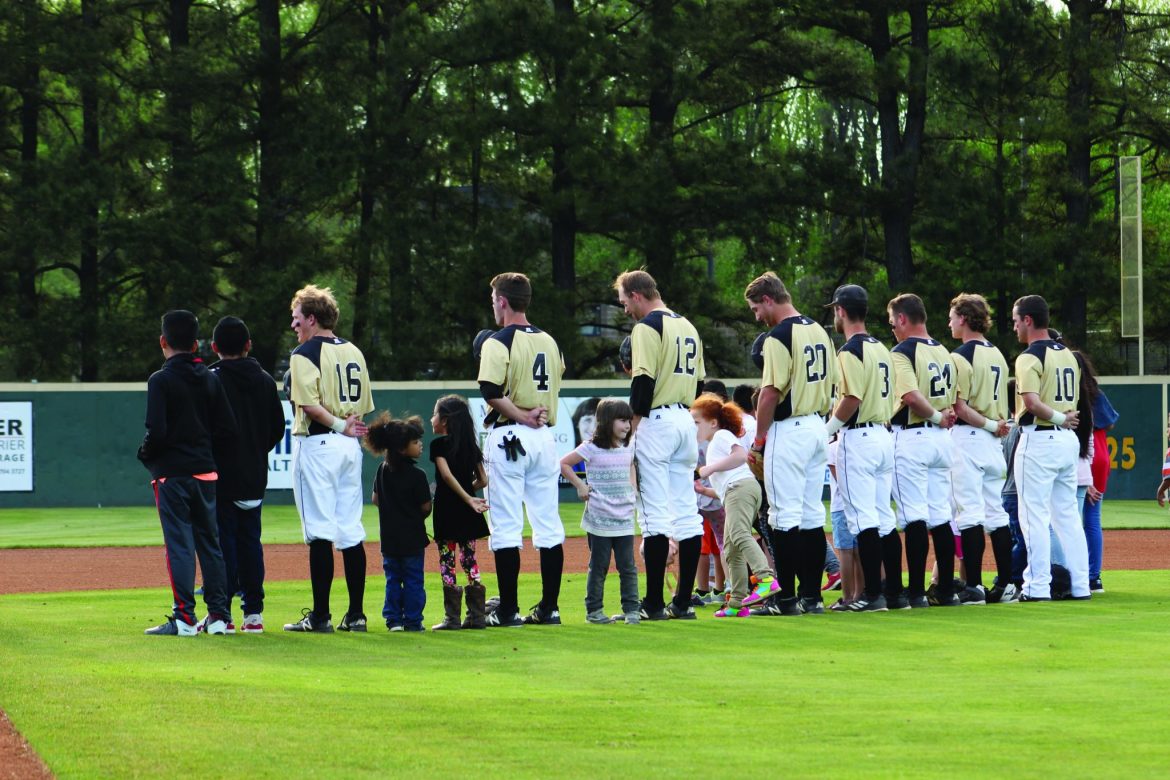 Children from the Lamp Light Ministry group stand with the Harding baseball team for the National Anthem on Tuesday, April 16 at Jerry Moore Field before a game against Christian Brothers University. | Photo courtesy of Lexi Hoagland

The Harding baseball team tried to add a bit more excitement to their mid-week, non-conference matchup against Christian Brothers University on Tuesday, April 16.The team hosted children from the Lamp Light Ministry, a student-run organization that serves families in the Lamp Light Villa trailer park in Searcy.

Senior Lexi Hoagland, director of marketing and fan experience for the Bisons, and who organized the event for the children, said she came up with the idea based from connections the baseball team had with the ministry.

“We knew it would be a great opportunity to connect the guys with some younger fans in the community and provide an opportunity for the kids to have fun at the field,” Hoagland said.

“It was great for them to take the field with us,” Thomas said. “It’s easy coming off of a long road conference series for things to get dull, but they brought all kinds of excitement to the game.”

Head Baseball Coach Patrick McGaha said the kids brought an excitement and love for the game to the ballpark, which gave his team extra motivation to go out and get a win. He said he is also thankful for Aramark providing the kids a hot dog, popcorn and a drink during the game.

“It’s always good for us to have a bigger crowd out,”McGaha said. “I thought it was fun for our guys to have the kids at the game.”

The team signed and gave each of the kids a Harding baseball. The kids returned the favor and drew pictures of gloves, hats and bats for the players, which Thomas said came as a surprise to the team.

“It definitely wasn’t expected,” Thomas said. “But I’m going to make sure I hang on to my picture.”

Hoagland said the kids were thrilled to pose for photos with the Bisons. Three girls even got to announce the lineup in the second inning over the loud speaker.

“It was cool to see them transition from game mode to having a huge heart for these little kids,” Hoagland said.

Junior Elissa Tetrault, leader of Lamp Light Ministries said it is important for the kids to be involved in community events, and she is thankful to the baseball team for including them.

The Bisons have done multiple service projects this year, including playing kickball with kids from the Sunshine School, assisting in the Miracle League of Arkansas, playing bingo at Harding Place and volunteering as Bison Buddies at local elementary schools. Thomas said service is something the coaching staff preaches to the team.

“It’s important for us to be reminded of our platform,” Thomas said.“We all have the ability to be a light in someone’s life. I think the sooner a student athlete can recognize their platform the better because there are a lot of opportunities to do good in this community.”

Players Only | Being an athlete in Spring Sing