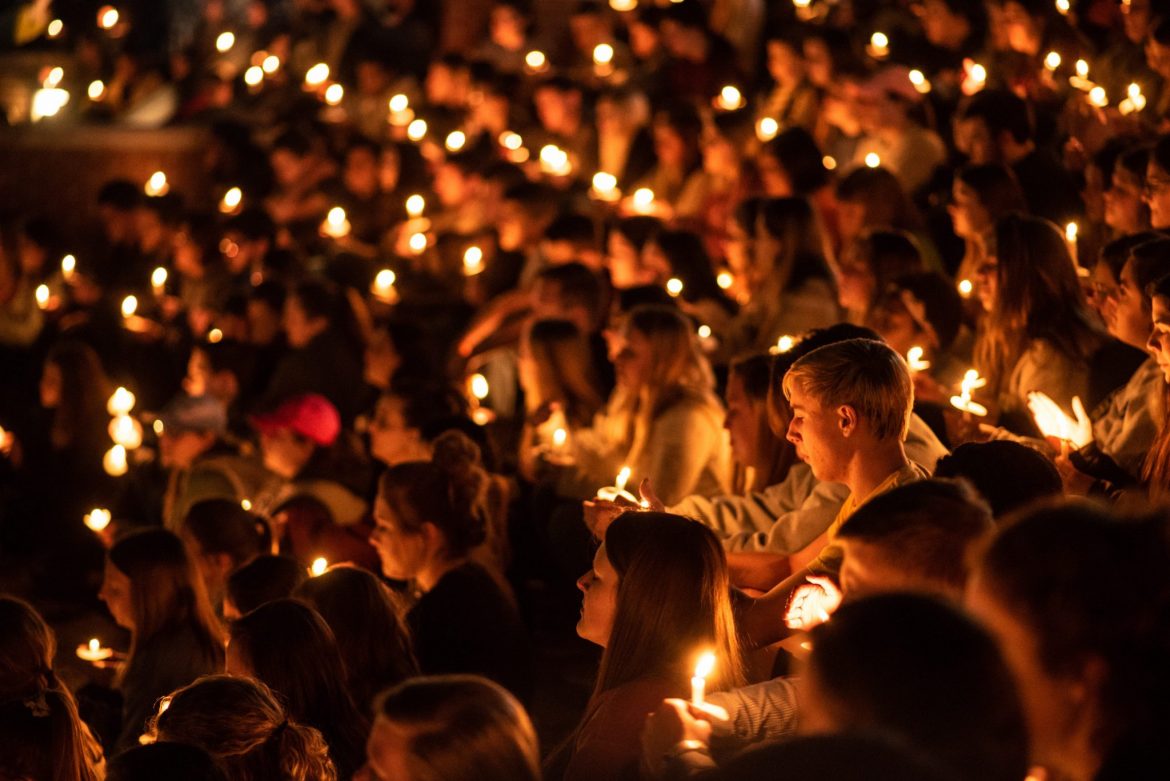 As the Harding community continues to mourn the death of a dear friend or a student they may not have even known, Hickerson said she believes Mary Joy’s impact will be profound because Mary Joy’s life was one of substance and purpose. | Photo by Sterling McMichael

“She spread love and joy every day without even realizing it,” sophomore Sarah Hickerson said. “She was genuine and passionate about creating long-lasting relationships with people.” And in death, her memory is emboldened just the same. “She touched every single person she came in contact with, and some she never even met,” Hickerson said. “She will be remembered by her continuous joy and kind actions to her friends around her.”

Mary Joy was a junior at Harding University. She was a nursing major and a member of women’s social club Delta Gamma Rho. On March 16, Mary Joy died after injuries sustained in a car accident on March 8 as she was traveling home for spring break.

Mary Joy was also traveling with her sister, senior Rachel Uebelein, who sustained a concussion from the accident.

As the Harding community grieves the loss of a friend and sister, the interwoven nature of the community gives grief the opportunity to be experienced on a different level.

Jana Rucker, vice president of university communications and enrollment, knew Mary Joy through her home Bible study, and Mary Joy’s suitemate was the daughter of Rucker’s best friend from college. Rucker said you either knew Mary Joy or you knew someone who did.

Rucker said loss is only one degree removed at a place like Harding.

“If you love them, I love them — that’s how it is at Harding,” Rucker said. “If you meet a mutual friend, you immediately love that person through being Christian brothers and sisters. You’re going to become a part of my circle because of that connection.”

As news spread of the accident, support began to pour in from the Harding community and beyond.

According to Mike Brown, youth minister at Lafayette Church of Christ in St. Louis, Missouri, where Mary Joy attended, crowds at the hospital had grown to nearly 250 people by March 10.

Students, administration, church members and family friends populated the waiting room as news developed, and as news came that Mary Joy’s prognosis was not looking good, Brown said those communities only became stronger.

“Our faith community, we’re just kind of here for each other to remind each other of the calling we have in Christ,” Brown said. “When you’re in the middle of something like this, it’s easy to despair at the situation, but at different times, different people in the community remind you to not forget that God is present and the redeemer.”

On March 15, the Uebelein family informed family and friends that Mary Joy would be removed from life-support machines and that her organs would be donated.

When Mary Joy died the next day, the thought of grieving became a reality.

As students returned to Harding’s campus the weekend of her death, the conversations centered around Mary Joy. On March 18, women’s social club Delta Gamma Rho members sported their jerseys in Mary Joy’s honor. On March 19, campus gathered at the steps of the George S. Benson Auditorium to mourn, and on March 21, Mary Joy’s life was remembered in chapel.

Having known her or not, students found themselves in a community where grieving is a process that is not solitary.

Rucker said the Harding community realizes grieving must be something done together.

“Do we scatter and grieve, want to be alone and not think about it?” Rucker said. “Or do we want to find ways where there is good and that we can come together and remember and honor her?

Sophomore Sarah Hickerson was best friends with Mary Joy, having met her through Delta Gamma Rho. At a Delta Gamma Rho recruitment mixer during fall 2017, Hickerson and Mary Joy met in the rotunda of the McInteer Bible and World Missions Center.

The mixer’s theme? Dress as your hometown.

“She was wearing a San Antonio Spurs jersey and a St. Louis Cardinals jersey unbuttoned overtop, and I quickly knew we would be friends,” Hickerson said. “She was glowing. She spoke about her sports teams with so much passion, and it just made me smile. As she wore her sports jerseys, I had a Dallas Cowboys jersey on. It was destiny for us to be friends.”

This semester, Mary Joy and Hickman’s friendship flourished. They had a standing dinner date each night in the cafeteria, and after spending so much time together, they started taking after one another.

“After we became friends, everyone said we acted the exact same — like we could be twins,” Hickerson said. “This was an honor to me and it still is today. I was so lucky to have my best friend [as] the best possible role model out there.”

Mary Joy was not just a role model to the friends and peers she encountered at Harding. Brown said Mary Joy was an integral part of their youth group in St. Louis.

“Mary Joy stood out early on as someone who was a quiet leader, but at the same time, very pronounced through her quietness,” Brown said. “She was always, even from middle school, reaching out to others and helping others.”

To the juniors and seniors in the youth group, Brown said Mary Joy became known as “mom” because of her caring and kind spirit.

Those juniors and seniors are taking Mary Joy’s death hard, Brown said, because even as Mary Joy went to college, she stayed in touch with the students and encouraged them.

“I’ve been in youth ministry for almost 30 years, and I don’t know if I’ve had someone that cared for people to that extent,” Brown said.

As the Harding community continues to mourn the death of a dear friend or a student they may not have even known, Hickerson said she believes Mary Joy’s impact will be profound because Mary Joy’s life was one of substance and purpose.

“Twenty years isn’t a long time, but Mary Joy made an impact bigger than most would make in ten lifetimes,” Hickerson said. “She was a gift from God, and people should understand that a woman like her is very, very rare.”

For the church community in St. Louis, Brown said good has already arisen from a situation where it seems like good is nonexistent.

They have taken hold of the good found in the purpose-filled life of their friend, mentor and sister.

“We kind of look at this and go, ‘Wow, what a waste,’ but at the same time, God is redeeming this already, even in some small ways,” Brown said. “There are kids in our youth group who have said, ‘I’m going to try to be better and be like Mary Joy was to people.’ There’s already a renewal and regeneration of life that’s given through the life that Mary Joy lived and the life that God gives us.”

Process of grief a universal but individual experience