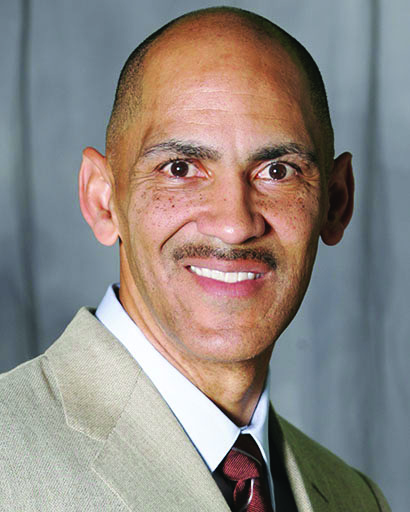 Dungy started his career in football as a player for the Pittsburgh Steelers, and then he coached the Tampa Bay Buccaneers from 1996 to 2001. In 2007, as head coach of the Indianapolis Colts, Dungy was the first African American coach to win a Super Bowl and was head coach until he retired in 2008. He was inducted into the Pro Football Hall of Fame in 2016. Dungy, who is open about his Christianity in many aspects of his life, has also written several faith-based books.

Paul Simmons, Bisons football head coach, said he is thrilled to have his team listen to someone with such a “wealth of knowledge.”

“The main thing I want my guys to see [is] that to win at a high level, you don’t have to sacrifice your character and morals in the process,” Simmons said.

Simmons said Dungy is an example that if people do things the right way and put themselves last, those actions pay off in the long run.

“If you serve and have a great deal of class and loyalty, then it will pay off,” Simmons said. “I’m excited for my guys to be exposed to such a special guy that has excelled at such a high level but also makes it evident that serving God and helping others is his top priority.”

Junior Dylan Hendricks, inside linebacker for the Bisons, grew up watching Dungy coach. He was impressed that ASI got a speaker with such accolades to come to Harding.

“[I’m mostly looking forward to] just being able to hear his insight,” Hendricks said. “I’m sure he has a lot of advice to give, and I am really intrigued to hear what he has to say.”

As Student President of ASI, senior Olivia Womack is looking forward to welcoming new audiences to the university for the event.

“I think one of the cool things about ASI is that we try to get a lot of diverse fields and people from diverse backgrounds, so we can get different perspectives,” Womack said. “I think bringing an athlete will bring a different group of people to campus — people that may not have come for other lectures. I am excited to hear from that perspective. I hope athletes will also enjoy it as well.”

Dungy was hired as a football analyst by NBC in 2009 and has been there since.