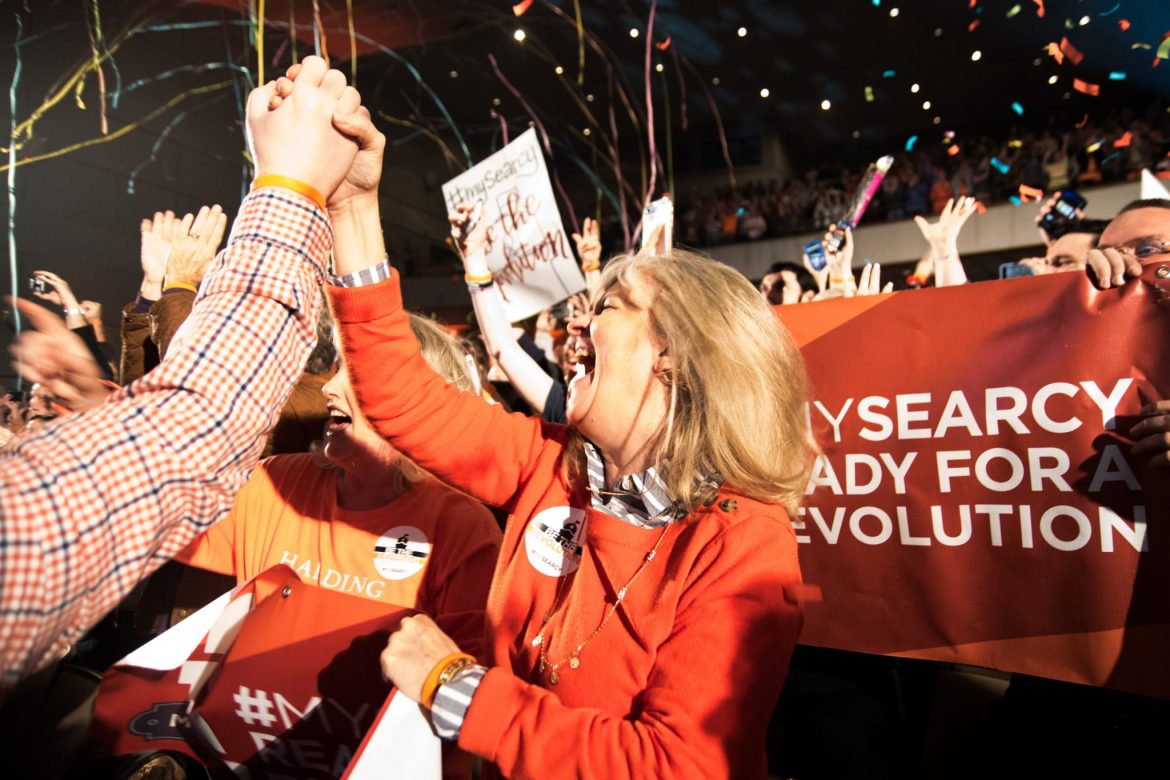 After a nearly four-month process of campaigning and voting, Searcy went from one of roughly 12,000 nominations in the Deluxe Corporation’s Small Business Revolution to the No. 1 spot, winning $500,000 and a spot on Season 4 of the Small Business Revolution HULU reality TV show. The money won will be used to revitalize six chosen local businesses.

Thousands of Searcy residents and Harding students gathered at the George S. Benson Auditorium on Wednesday, February 26, to watch the live announcement.

The excitement was building among the crowd with anticipation of what town would be declared the winner. Several community leaders, including Harding President Bruce McLarty, spoke at the start of the watch party. McLarty said students have been energized and involved in the voting process, and Searcy Mayor Kyle Osborne said he has never seen so many people get so excited about one thing.

Amy Burton, executive director of Main Street Searcy, has been highly involved in the Searcy Revolution since day one.

“The reward is going to be so huge,” Burton said. “There has been a fire in our community that we have never seen. It makes me so proud to look out and call this my hometown.”

Mat Faulkner, chief idea officer of Think Idea Studio and one of the main organizers of the Searcy Revolution, said the community of Searcy has been building up to this moment for four months.

“Everybody coming together and organizing this event [watch party] was the pinnacle for this whole process,” Faulkner said. “We were ready. Just like the slogan says, Searcy was ready for a revolution.”

As Searcy was announced the winner, Amanda Brinkman, host of Small Business Revolution, walked out on stage amid balloons and confetti to personally congratulate the town.

“You have so much to be proud of because of the way you have rallied together in the last four months,” Brinkman said. “You guys get to be an example to the rest of the world. So congratulations. It’s so great to be back home in Searcy.”

“I was pretty confident that no matter what the choice was, we were going to end up with some sort of revolution,” Gentry said. “I just feel like Searcy has the momentum to go forward because we’re already a growing town.”