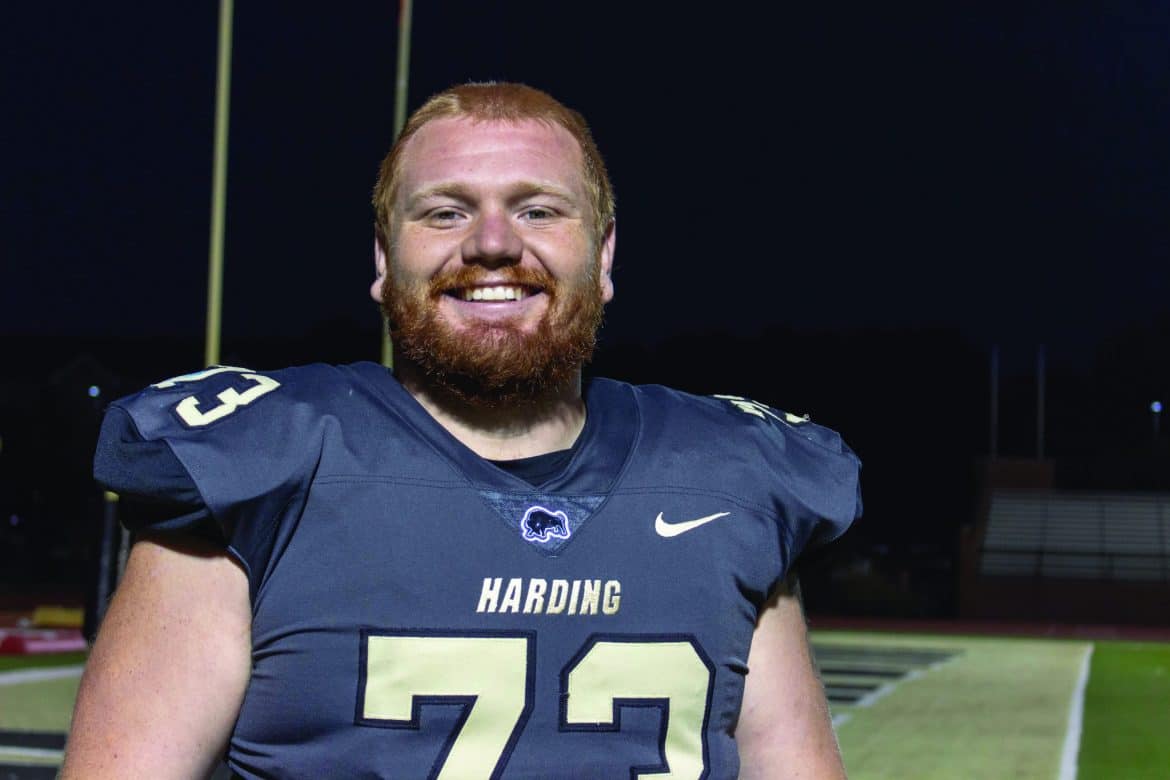 As he drove down the roads to his grandmother’s house, former Harding center Bryce Bray answered a call he never thought he would get.

“I picked up the phone and [Head Coach Paul Simmons] said, ‘You won the Rimington … You are the best center in Division II football,’” Bray said. “I’m like, ‘you gotta be kidding me, coach. That is incredible.’”

Every year, the Boomer Esiason Foundation recognizes the top center of each division of collegiate football by presenting them with the Rimington Award at a ceremony in Lincoln, Nebraska. Bray is the 16th player to win the award and the first from the Great American Conference.

Bray started 50 games for the Bisons over four years. This season, he was named first team All-American by the American Football Coaches Association (AFCA) and received All-Region honors by the DII Conference Commissioners Association (D2CCA) for the third consecutive year. Despite his numerous accolades, Bray consistently points to his teammates as the key to his success.

“I would not have been able to win any of these awards if our offensive line was not that stinking dominant,” Bray said.

When he first arrived on campus, Bray was an undersized lineman. After briefly committing to Arkansas Tech, he eventually came to Harding where he was quickly thrust into the starting lineup due to a lack of depth.

“I had no idea that this would happen,” Bray said. “I was really just scared to death.”

On the field, Bray has been dominant. He became the first player in Great American Conference (GAC) history to ever be named Offensive Player of the Week. Off the field, Bray continued to be a leader.

“He was an accountable brother and teammate,” junior offensive lineman Mills Bryant said. “His example elevated the team to a new standard.”

Bryant said Bray’s work ethic and detail-oriented film study helped him overcome some of his size limitations. Bray said he would spend over three hours every day studying film so he could stay a step ahead of his opponents.

“You cannot take any plays off or you’ll get embarrassed because you’re undersized,” Bray said.

Bray was accompanied by his coaches to the ceremony in Nebraska, where he was able to meet Dave Rimington, the former Nebraska center who is the award’s namesake.

“To me, it was a fitting end to his career,” Harding Offensive Line Coach Kevin Chism said. “He’s been rock solid and something we can rely on every game.”

Bray’s Christmas break was highlighted by another award as well: graduation.

“It’s going to be weird going into the spring and [Bray] not being there,” Chism said. “He’s been such a constant for me over the last four years.”

Bray now serves as a graduate assistant for the Bison football team as he completes his Masters of Arts in Excellence of Teaching.