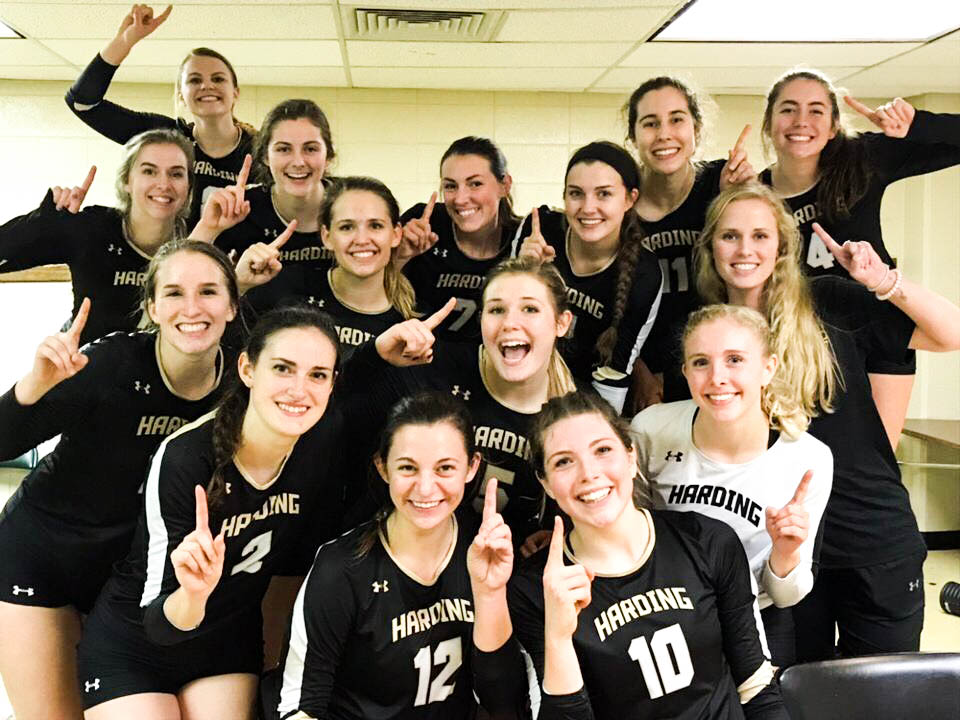 Harding entered the game as a major underdog. UNK was the No. 1 seed in the Central Region and the No. 3 ranked team in the country. This year marked the 20th consecutive season the Lopers qualified for the NCAA tournament. Harding was making only its 5th appearance in school history.

The first set went according to script. After a solid start, the Lady Bisons struggled. The Lopers hitters were able to connect on 16 kills and led the team to a 25-21 victory. Despite the result, Head Volleyball Coach Meredith Fear said her team was confident in its ability to compete.

“In our own conference tournament, we squeaked out a win [in five sets] against our eight seed,” Fear said. “We knew it was possible.”

The Lady Bisons recovered in the second set after going on a 6-1 run. The Bisons would win the set 25-22 and then add to their lead with a 25-21 third set victory.

“Getting that [second] set really helped us get settled in and play our game,” senior middle blocker Zoe Hardin said.

“We kind of just took [the fourth set] like a Band-Aid,” senior right side hitter Emma Reeves said. “We just ripped it off and moved on.”

Harding would seize control quickly in the fifth set, jumping out to a 7-3 lead. Hardin would complete the upset with a kill. She was a main contributor defensively for the Lady Bisons. Harding out-blocked UNK 15-8, and Hardin’s 11 block assists tied for fourth-most in Harding history. The Lady Bisons’ 15-9 fifth set win moved them to 6-2 in matches that have gone the distance. In the fifth set against UNK, Harding did not commit an error.

Harding’s next opponent will be the four seed, Concordia University, St. Paul, who defeated Southwest Minnesota State in five sets. Concordia is ranked No. 9 in the nation, but Fear said she thinks her team has the confidence to beat anyone.

“We say bring it!” Fear said. “We can take on anybody. Bring on [University of] Nebraska!”

Harding’s win was not only the first NCAA Tournament win in program history, it was also the first win in the tournament by a team from the Great American Conference. Fear admitted the level of competition in the Central Regional is much higher than in conference play, but she said her team has craved the chance to play tougher teams.

“In our conference, we are not playing this level,” Fear said. “This is what we wanted, and we are ready to get out there and do it.”

Harding has won 14 straight games, but to make it through the regional, they will have to win two more games, both of which will come against teams ranked in the AVCA Top 10.

“We know what we’re into in this region,” Fear said. “To get one win would be amazing. We have the confidence that if we can beat one … we can do it all.”

The Bisons next game will be tonight at 7:30 p.m. in Kearney, Nebraska. The winner will earn a spot in the third round and be one of 16 teams remaining.