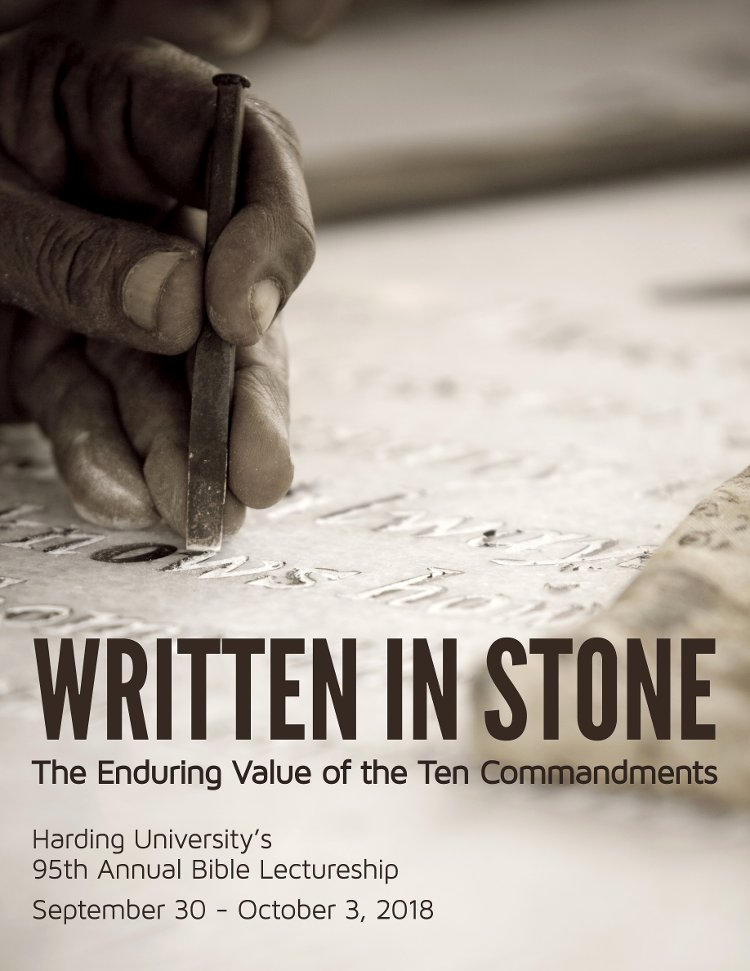 Since the school’s founding in 1924, the Harding community and friends have gathered to worship, fellowship, attend lectures and receive encouragement through Bible Lectureship. Harding’s 95th annual Lectureship will take place Sept. 30 through Oct. 3, 2018. This year’s theme is “Written in Stone: The Enduring Value of the Ten Commandments.”

Dan Williams, Lectureship director and vice president of church relations, said the theme was chosen because it seems especially appropriate at this particular moment in our culture.

“Whether it is due to postmodernism, relativism or just plain political spin, the very concept of truth seems to be under attack,” Williams said. “The Ten Commandments remind us that God has revealed some fundamental moral laws, that some things really are written in stone.”

This year, alumni, church leaders, friends and Harding affiliates come from all over the nation and world to attend over 160 presentations from more than 90 speakers who bring a variety of perspectives and experiences, according to Williams.

“One of our keynote speakers has been a soldier, a boxer and a bodyguard for Muhammad Ali before becoming a minister in Alaska,” Williams said. “I’m looking forward to meeting him.”

Sophomore Carley Keller is also looking forward to the variety that Lectureship speakers bring to Harding.
“I think it is beneficial for us to hear from speakers who aren’t necessarily preachers, and in a different setting other than church services,” Keller said.

Keller attended Lectureship last year for class credit and plans on attending a few lectures this year as well.

Dr. Laurie Diles, a keynote speaker and associate professor of communication, said her favorite part of Lectureship is seeing friends who travel to Harding for the event.

“That’s probably the best part of Lectureship for me,” Diles said. “It’s a family reunion with friends.”

Diles will be speaking for Ladies Day, a special event for the women attendees of Lectureship.

She will be speaking on “The God of Reconciliation,” Monday, Oct. 1, in Cone Chapel at 2 p.m.

While many of the attendees are ministry and church leaders, students are encouraged to attend.

“I would encourage students to look at the schedule … and look for either speakers that they’ve heard before who they liked or look for topics that they think will be challenging,” Diles said.

Diles also encourages students to attend lectures by their fellow students for student lectureships — to encourage their fellow classmates and learn something from them.

According to Williams, there will be a student highlights brochure that lists various programs of interest to students specifically, including 10 musical performances, student lectures and several presentations.

Starting Sept. 30, and continuing every morning until Oct. 3, there will be worship assemblies and a morning keynote address, followed by multiple lectures. For the full schedule and more information, visit harding.edu/lectureships or pick up a printed information packet.