Home Features At 600 Pleasure St., displaying a lifetime of memories, one painting at a time

At 600 Pleasure St., displaying a lifetime of memories, one painting at a time 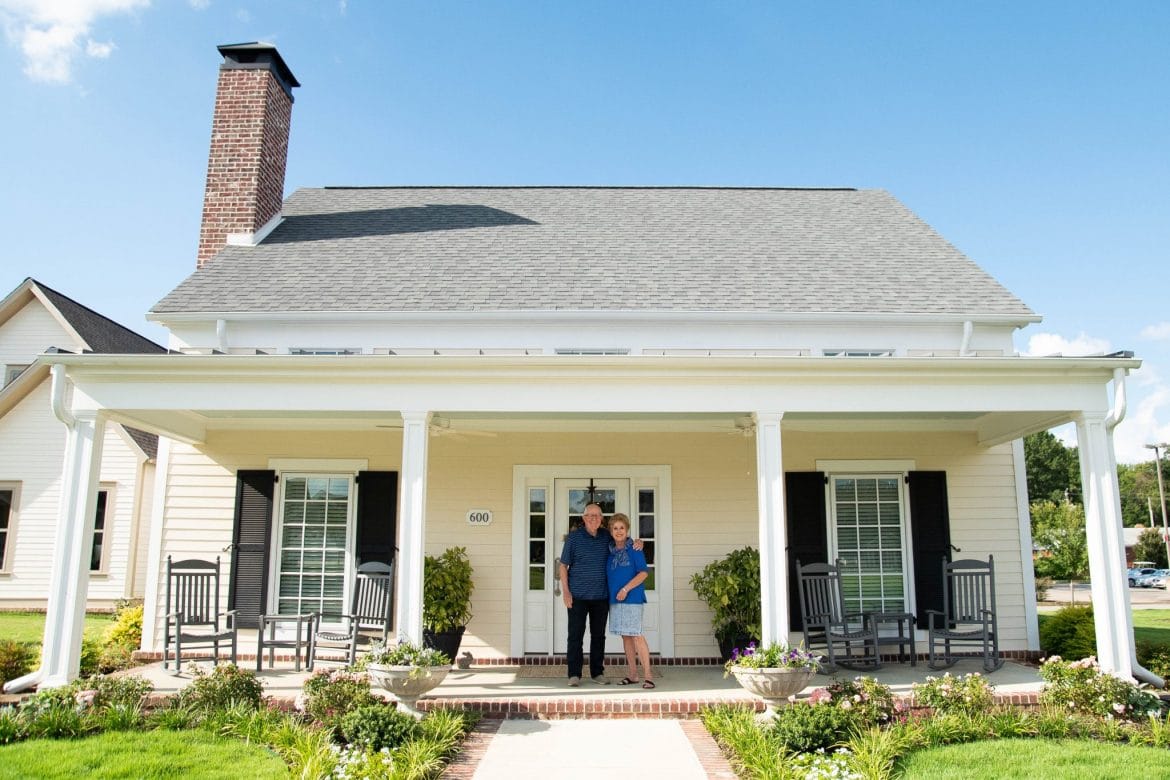 In the last few years, Pleasure Street on the west side of campus has transformed from open lots where married couple apartments resided to a new community of apartments and homes. The new development has been opened to people who love Harding and want to live closer to campus.

One of the new Legacy homes is occupied by Durwood and Louise Pickle. The Pickles moved to Pleasure Street last year when their son, Steve Lake, assistant vice president of advancement, told them about the new addition.

The Pickles never thought they would leave Texas. They had built a home in Dallas and were hesitant to leave it behind. However, after Durwood and Louise talked about it together, they decided that a combination of horrendous Dallas traffic and the opportunity to be close to family was reason enough to move.

Durwood, a trained architect, was able to have partial control of the plans for their new home.

“We did the total design. They gave us a few guidelines, like they wanted it to be colonial style and all of them were supposed to have a porch, so that’s how we started,” Durwood said.

According to Chancellor Dr. David Burks who led the Legacy Park project, the goal of Legacy Park is to create a community where faculty, staff and students live together close to campus. While the house designs have to be approved by the architectural review committee, homeowners can have some creative freedom.

“We expect that every house will be different but that there will still be a unity of theme in terms of how the neighborhood looks,” Burks said.

When it came to the interior, however, the Pickles were able to have complete creative control by adding things like high walls and ceilings to accommodate for Durwood’s personal art. “With these high ceilings, we wanted more classic art, so I started painting classic paintings before we left Dallas knowing they would be hung on these walls,” Durwood said.

Durwood has been painting for 31 years. He started before he retired when his personal business began to slow in the 80s. Since then, painting has always been a hobby of his, and though he doesn’t have a favorite subject to paint, he loves oil paintings. While he brings the art to the home, Louise brings the design. She has carefully picked every place to put his paintings and also collects her own antique decor to put in their home. One of her favorite rooms in their house is the one dedicated to Texas. The room is filled with sentimental keepsakes from her childhood and is also filled with some of Durwood’s western-themed paintings.

Durwood loves to give paintings as gifts for his loved ones; one of the most recent paintings was for Louise’s birthday.

“I just turned 80 and Durwood asked me what I wanted for a painting, and I said I wanted a cardinal because they say that your loved one will come back to visit you. My mother is my cardinal,” Louise said. “She passed away several years ago, and that reminds me of her.” The Pickle’s both lost their first spouses due to illness, and then found each other later in life.

“Durwood lost his wife after I had been widowed for a couple years, saying I would never marry again,” Louise said. “He had come to our church to visit because he had just lost his wife, and when they said Durwood Pickle, I was a little concerned. That’s a different name, you know? But I have gotten used to it 32 years later.”

After they retired, they decided to travel the world, collecting memories with each adventure. Their experiences are shown in their home through various paintings of places they have visited.

“So, we traveled for 20 years. We had a good time … we had sadness in our lives when we lost our mates, but you turn the corner and good things can happen,” Louise said.

When it comes to a perfect team, it does not get much better than Durwood and Louise.