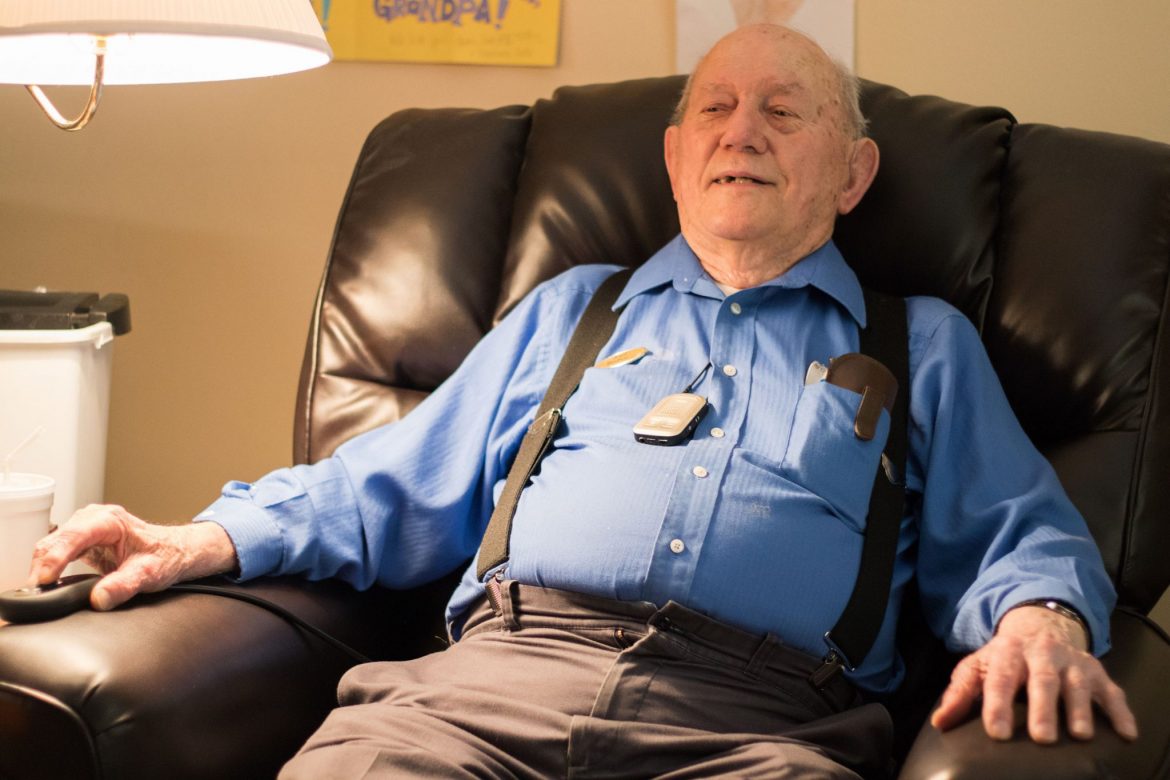 Ninety-six-year-old Joel Bisbee is the oldest and longest resident of Harding Place. The World War II veteran has lived there for 16 years and said he knows almost every resident. He still drives his own car, has scored at least eight 300-point Wii Bowling games since moving in and, according to a member of the staff on his hall, cheats at cards.

When his wife Sybil Bisbee got sick in the early 2000s, Bisbee retired from his job at the post office in Searcy to stay at home and take care of her.

“One day I was cutting wood for our fireplace, and I knicked my knee with that saw. It made a gash, but if I was moving full speed, it probably would’ve cut my leg off,” Bisbee said. “My daughters got together and decided I didn’t need to be cutting wood. We were going out to eat and they said ‘Let’s go to this Harding Place.’ I knew what was up when they brought me out here. I didn’t want to move out here, but it’s the best thing I ever did.”

Joel and Sybil Bisbee moved into Harding Place in 2002 and were going on 65 years of marriage when she died in 2011.

“When my wife died, I decided, ‘Man, this is the best place for me.’ They cook and clean and make your bed on Tuesdays. I don’t have to do anything but read the papers and watch TV,” Bisbee said. “I get a lot of R&R — remote and recline.”

He met Sybil while she was working at a power plant in Jacksonville, Arkansas, making ammunition during World War II and rooming with his niece. They corresponded via mail until the end of the war.

They spent 60 days of his leave together before he was stationed in San Diego, California, and it was then that he decided he was ready to get married.

“She was 21, and I was 24. She was a Christian, and I was nothing but a hillbilly I guess,” Joel Bisbee said. “She didn’t know anything about married life and I didn’t either. She put up with me, and I’m sure glad she did. You’re not supposed to be unequally yoked with somebody.”

For years he would drop her off at church and pick her back up afterward, only visiting occasionally. He said he thought he was unfit for Christianity because he smoked and enjoyed a beer every once in a while.

In Washington D.C., they lived in an apartment complex with other Church of Christ families, and he began to attend services with his wife and said he enjoyed gospel meetings with their preacher. However, it took one more positive influence for him to convert.

“My daughter became a Christian before I did and that made me think,” Joel Bisbee said. “Something just came over me, and I was baptized. I stopped the smoking and drinking and everything else and became a Christian and have been one ever since.”

Through his time in the Navy, they moved around California, Florida, Hawaii, and Washington D.C., but after 24 years with the military, Joel Bisbee retired. He moved his family to Searcy,  worked for the post office and became a deacon at Downtown Church of Christ, where he still attends.

“I was an Arkansas guy at heart,” Joel Bisbee said.

Joel Bisbee, an avid Razorbacks fan, grew up west of Little Rock and, while he dropped out of school in the 8th grade to work with his dad as a logger, he encourages young people, like his daughters who both attended Harding, to pursue their education.

“Hang in there and get a good education. I never had one,” Joel Bisbee said. “When I joined the Navy I didn’t know anything hardly. I finally got a GED, but that was after the war was over. I didn’t realize what a bad mistake it was to not get an education. That’s why I wanted my girls to get one.”

As for his age, he considers it nothing but a number.

“I don’t feel any different than when I was 20. A lot of people don’t believe I’m 96,” Joel Bisbee said. “I just grew up and never realized I was getting old.”