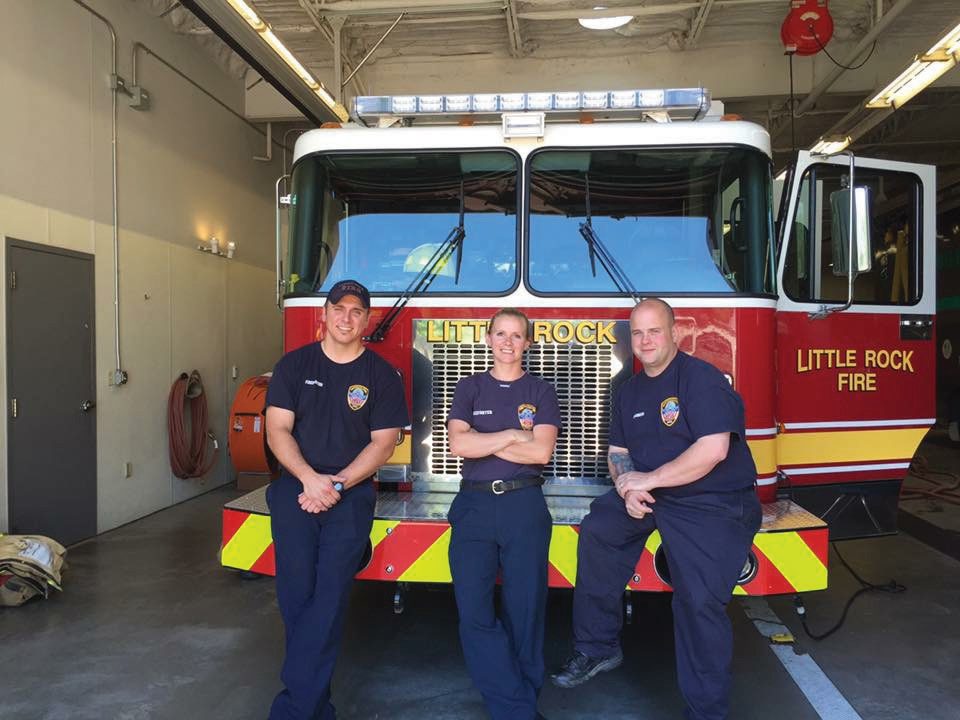 Alumna Kinsey Bradford played basketball her entire life, but she did not want to play in the WNBA — she wanted to become a firefighter.

Kinsey Bradford moved from her hometown of Searcy to Portland, Oregon, when she was 11, after her mother died of cancer in 1997. The move showed Kinsey Bradford what she wanted to do with her life.

“In Portland, they have a lot of smokejumpers (firefighters who parachute into a remote area to combat wildfires),” Kinsey Bradford said. “I skydived a couple times and thought it would be pretty cool to be a smokejumper. I got pretty interested in fire there and always enjoyed physical labor. I’ve always known it’s what I wanted to do.”

Kinsey Bradford led the Lady Bisons basketball team during her time on the team from 2004-08. She ranked second in Harding’s former conference (in assist average with 4.14) assists per game during her senior year, and she is Harding’s career leader in free throws at 84.7 percent. She was a sophomore when women’s head coach Tim Kirby started his career at Harding, and his impact on her life was huge.

“Had I not played for coach Kirby, it would have been detrimental to my career as a firefighter. He was so hard on you in a good way, he really pushed you to your limit,” Kinsey Bradford said. “I’ve fought fire and had a lot of hard rescues, but the hardest thing I’ve physically done is run a six-minute mile. I thought I was going to die.”

In their three years together, Kirby saw something unique in Kinsey Bradford’s work ethic.

“She’s the toughest player we’ve ever had,” Kirby said. “Whatever you asked her to do, she did it. She’s pretty impressive.”

Kinsey Bradford showed her resilience when she went to Nashville her senior year of college to take the physical agility test for the fire department. She passed the written test and showed off her physical abilities in a major way.

“My senior year, I went to a bunch of big cities and took tests to get experienced, because in the fire department, the more experience you have interviewing, the better you’ll be,” Kinsey Bradford said. “In Nashville, I went out there and gave it all I had and was recovering afterward when they told me that I broke the female record for their agility test. They offered me a job, but I turned them down because I wanted to finish school.”

After graduation, Kinsey Bradford accomplished her goal when she was hired as a firefighter in Portland. She then quit her job and moved back to Arkansas because she met her husband, Greg Bradford, before her senior year and wanted to be close to him.

“He’s my number one supporter. He’s very proud of me and he tells me all the time, which is more than I deserve,” Kinsey Bradford said. “I married up, and he’s way too good for me, and I think everyone around me knows that. He sits and lets me tell all of my stories and acts like he’s still listening after so many years.”

Kinsey Bradford became a firefighter EMT on engine 17 in Little Rock in 2011. She works at a single house with one fire truck moving out of her station, with a team of three other firefighters. Any time 911 is called in her district, her team responds.

“Firefighting is so much fun. It’s different every day,” Kinsey Bradford said. “The job always surprises you. There’s always calls that you don’t expect, and you think people are crazy. You see some really hard stuff sometimes, and things are hard to get over mentally.”

Reflecting on her basketball days, Kinsey Bradford compared the nerves before a game to responding to a fire call.

Firefighters work 24-hour shifts and have the following 48 hours off. Kinsey Bradford said some days, her team will respond to 15 calls, and the next only three or four. In response to various 911 calls full of violent acts, Kinsey Bradford said her faith has been vital in keeping her sane.

“It’s everything. You see so many bad things being a firefighter and, as a Christian, you have to understand that God’s in control, even though it doesn’t seem like it,” Kinsey Bradford said. “We’ve worked a lot of shootings in southwest Little Rock. Kids shooting kids. And that’s where my faith has saved me and kept me going. Part of the beauty of being a Christian is God is always there and you know he’s in control. He’s always by my side, and that’s what really gets me through.”

Kinsey Bradford graduated from Harding in 2008 and said it is crucial for one to know what they believe before entering the real world.

“I think the biggest thing I wish people would’ve told me is that, when you get out there, it’s going to be a lot tougher than you think,” Bradford said. “You just have to stick to what you know and stand firm in it.”

Bradford lives in Damascus, Arkansas, and is raising three girls with her husband. She encourages college athletes to look forward to the future, be grateful for what they have and put Christ first and, from there, everything will fall into place.

The Grand Slam | The end of a chapter