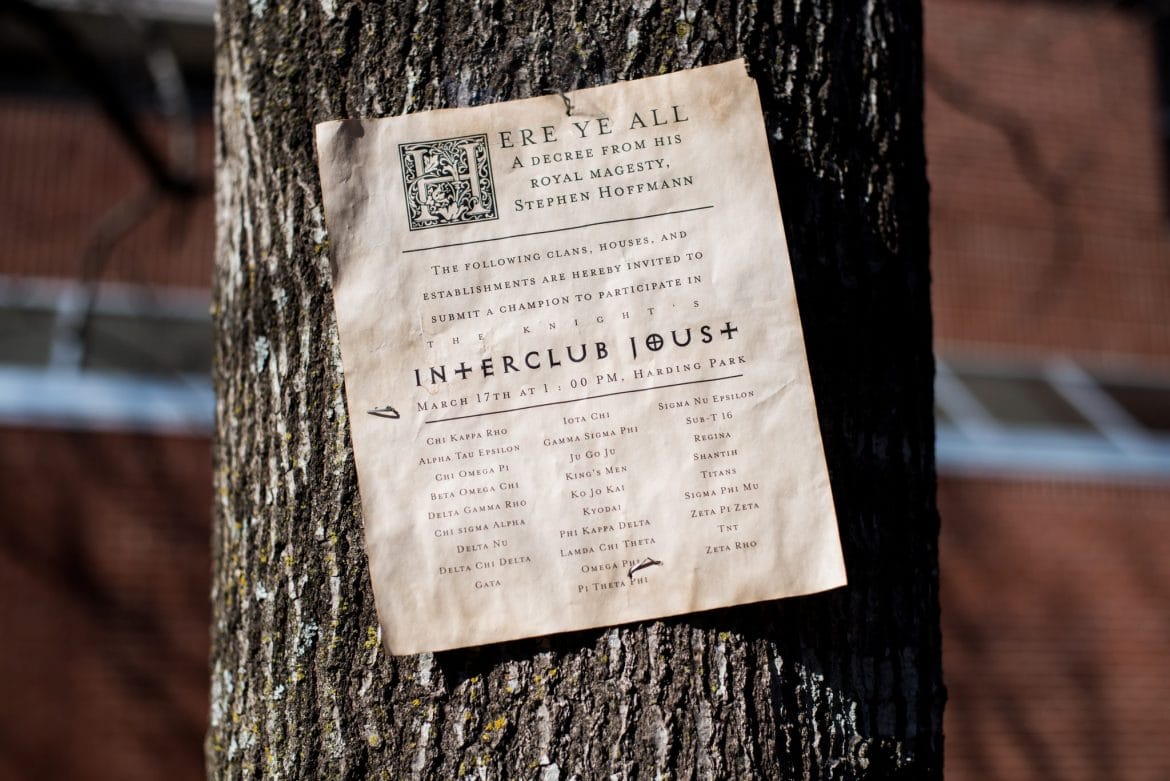 The Knights’ inter-club jousting tournament will be held tomorrow. The competition celebrates Knights’ 50th anniversary. The winning club will donate any money raised by the event to a charity of their choice. Photo by Emily Griffin

Knights, a men’s social club, will host an inter-club joust tomorrow. Each participating club selected one member of the club to compete in the tournament.

Jousting has been a Knights tradition for a number of years. The club holds a joust for its members semiannually, during Club Week and again during Spring Sing weekend. Knights created the inter-club joust as a way to celebrate its 50th anniversary.

Knights member junior Joseph Berryman is a coordinator of the event.

“We want to give back to Harding for the 50 years it’s given us,” Berryman said. “We encourage participants to build armor or dress up in costumes. I’ve seen some pretty intricate and excessive armor building before. I’m hoping clubs will go all out for it.”

“During our meeting, our president took nominations for people to joust,” Roach said. “The names that got thrown out were a mixture of jokes and guys who would compete well. I guess I was the funniest joke.”

Senior Morgan Pruitt, who is representing women’s social club Shantih at the joust, is planning to joust as an orange slice.

“I’ve never been to a Knights joust, so I don’t know what to expect,” Pruitt said. “I assume the energy will be really high because people will come support their club.”

For those similar to Pruitt who have never been to a joust, the event entails rounds of two competitors facing each other at opposite ends of a designated area. Jousters hold lances and ready themselves by raising their lances vertically. Knights president stands between the two with a raised sword. He lowers his sword to signify that the match has begun. As they gallop in a straight line toward each other, jousters lower their lances, intending to make a larger impact than their opponent. Matches are decided best two out of three, and the winner moves on to the next round.

“We hope to get as many clubs and people involved as we can,” Berryman said. “We’re raising money for the winning club to give to a charity of their choice.”

Knights is raising money by selling joust T-shirts. The club is also creating a 50 year anniversary album, containing songs released in 1968. The goal is the have the albums ready for sale at the joust.

“I think it’s cool that Knights is including the whole school in its 50 year anniversary celebration,” Pruitt said. “Shantih has chosen (the) Sunshine School as its charity. It’s a school that helps people with disabilities adapt to everyday life, and it teaches them key life skills.”

The joust is free and will begin at 1 p.m. at Harding Park. Joust T-shirts are  available for purchase for $15. To order a joust T-shirt, email Joseph Berryman at jberryman@harding.edu or visit www.customink.com/fundraising/knights-inter-club-joust.