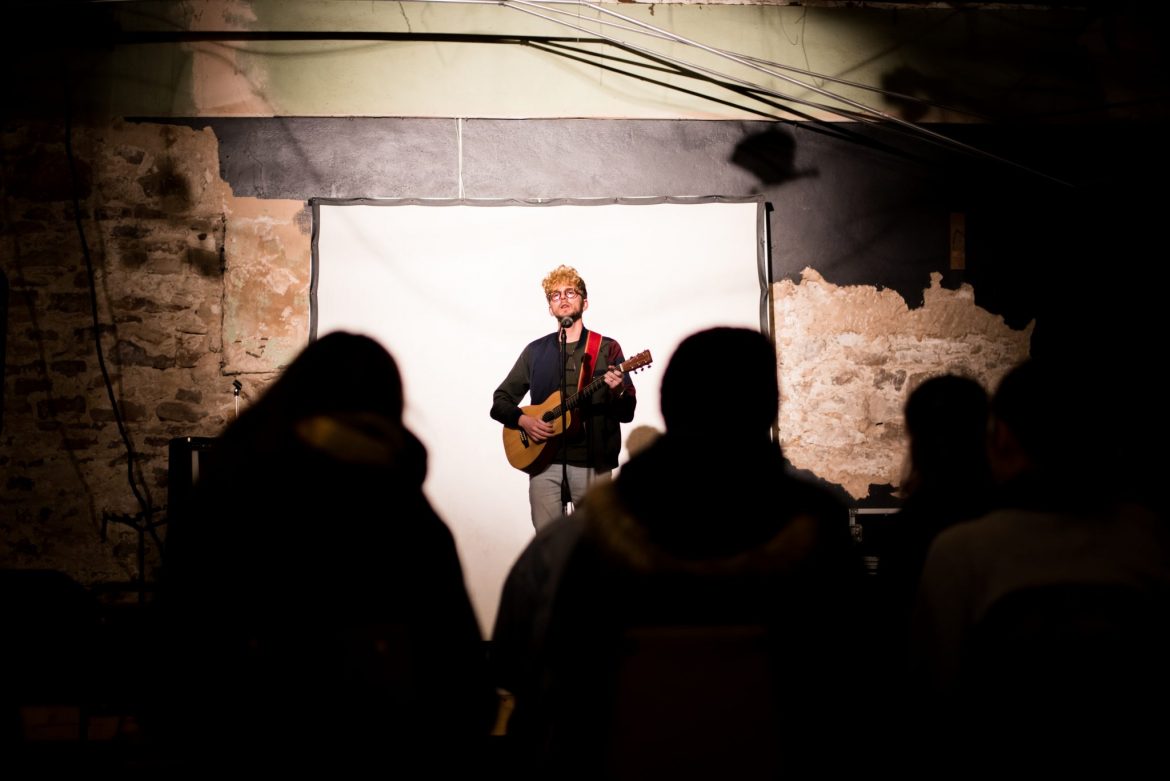 According to senior Brad Hendrickson, a Zion volunteer, this was Zion’s first open mic night. Hendrickson said he proposed the idea of an open mic night at Zion because he thought the venue would be perfect to share his love for open mic nights with people in Searcy.

“I want it to be a safe space for artists to perform–that they can step on that stage and no one is going to stop them for the next five minutes,” Hendrickson said. “It’s their stage. They get to perform. People can critique them later, but that five minutes won’t be touched.”

There were 23 people present in total, four of whom chose to perform. A variety of music, poetry and comedy was performed by those with the courage to share.

Sophomore Noah Turner performed his original song “Bleed,” a song about his struggles with depression, during the event. Turner said he has enjoyed performing since coming to Harding and especially enjoyed Zion’s open mic night because he likes the accepting atmosphere.

“One of the reasons that song, the reason I decided to play it was because it’s a song about past struggles with depression,” Turner said. “To be able to perform it in front of people and in a place like that, I guess feel confident in that. People immediately were saying “I appreciated so much, you played a song about (depression). It put me at ease and made me feel like those people were already my friends and part of my community.”

Stephanie O’Brian, director of the center for student success has experience with the effects of storytelling on mental health.

“When someone shares their story, it means they had the courage to do so,” O’Brian said. “It takes true courage to share your wounds and experiences.  It is vulnerable.  But when people find the ability to speak out, it means that whatever their story is–mental illness, trauma, grief–has less power than it did before.”

O’Brian said people telling their stories gives them power over their problems and can connect them with other people with the same struggles to help them find support.

“If we keep our hurts within, they grow stronger,” O’Brian said. “The sooner we share them, the sooner we become more empowered within.”

Zion plans to host open mic nights on the second and fourth Thursdays of each month, according to Hendrickson. The next open mic night will be held at 7 p.m. on Feb. 8 at Zion Climbing Center, located at 118 N. Spruce St. in Searcy. Signups to perform will be taken at the beginning of the event.

Do What it Takes