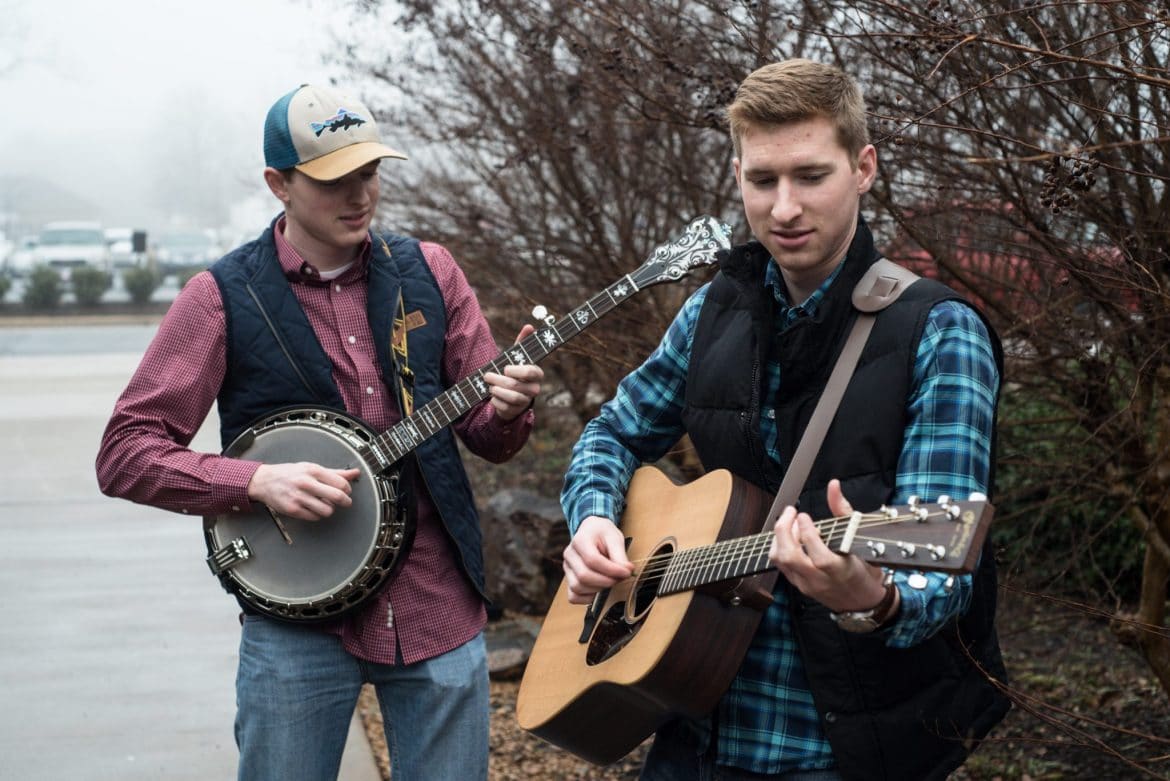 Senior Caleb Brackney and his brother junior Stephen Brackney practice for their next performance. Known as The Brackney Brothers, the two have been playing instruments since they were 7 and 8 years old. Photo by Sterling McMichael

For the Brackney brothers, senior Caleb and junior Stephen, music has always run in the family. Like their father before them, Caleb and Stephen Brackney have started their own band, known as The Brackney Brothers. The two have performed in nearby states, as well as at various functions and local events.

Their love for music began when they were both young.

“We grew up in a very musical family,” Stephen Brackney said. “My dad and his brothers all played instruments and they actually also had a band in college. They played bluegrass music, country and things like that with some of their friends. We kind of grew up with that band playing at different events and weddings, so we were around it a lot and were very encouraged by our parents to take lessons.”

Both brothers play the piano, guitar and bass. Stephen additionally plays the mandolin, and Caleb plays the banjo and dulcimer. However, they both began with five to seven years of piano lessons.

“I started piano when I was 8,” Caleb Brackney said. “Stephen started when he was 7. We started on banjo and guitar when we were 13.”

All seven of the Brackney children play a different musical instrument, including drums, fiddle, mandolin, banjo, piano and guitar. According to Stephen Brackney, their parents had all of them learn how to play an instrument to help them bond as siblings.

“There’s seven of us, but with instruments, anyone who learns for two or three years can contribute evenly,” Caleb Brackney said. “I’m sitting there with Luke who is 8 and he’s banging on a drum.”

When they were younger, the brothers recalled their family going to nursing homes, fundraisers and other events to perform as part of their community outreach.

The brothers play predominately bluegrass music. Senior Katelyn Perrett, a member of Belles and Beaux alongside Caleb Brackney, believes his bluegrass style has added a new flair to the group’s sound.

“In Belles and Beaux, we try to play a wide range of music: from classics to rock, to pop,” Perrett said. “So the fact that Caleb is able to add that (style) to some Belles and Beaux songs and give them a country, bluegrass feel is always exciting and makes us a more versatile group.”

Caleb Brackney said he loves bluegrass because of the way the instruments blend together.

“I love how each instrument contributes equally in each song,” Caleb Brackney said. “Sure, I could play by myself, but it sounds better if (Stephen’s) there. … (In bluegrass) everyone gets to show off their licks. When they are at home, the two brothers play with their siblings, but when they are at school, they welcome anyone who wants to play. Caleb Brackney said the community created by music is his favorite part of playing

According to Stephen Brackney, playing music together in their band has brought the two brothers closer together.

“For us, (playing together) has given us a good outlet to connect more,” Stephen Brackney said. “You can connect more than just through talking and being around each other, you’re bringing something together to sound good and have fun.”

Although the band has booked shows for up to 1,500 people, Caleb Brackney said his favorite place to perform is still in nursing homes.

“The people there appreciate us so much,” Caleb said. “Nothing feels as meaningful as having elderly men and women smiling and clapping in their wheelchairs and genuinely supporting us.”