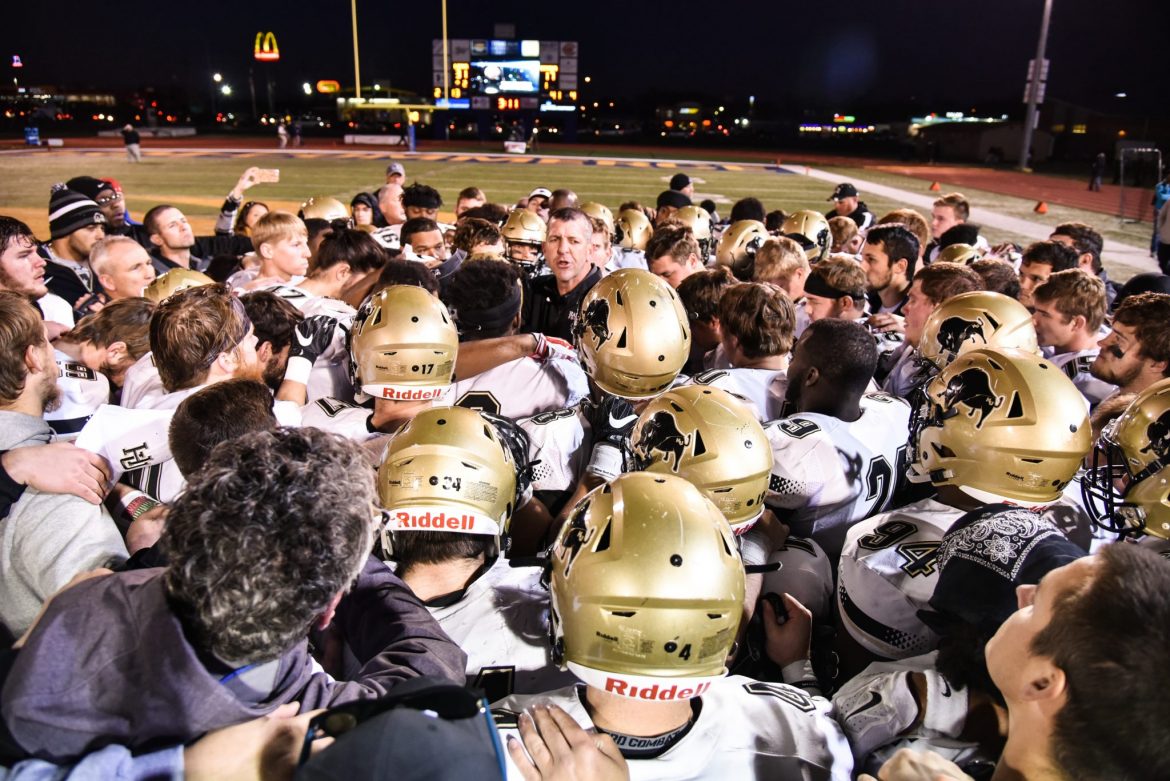 The historic Bisons football season ended Saturday, Dec.9 after a 17-31 loss during the NCAA Division II national semifinals against Texas A&M-Commerce in Commerce, Texas. This was the first season in the program’s history that the team played in the NCAA final four. The Bisons finished the season with a 11-4 record.

​“Most of my life I’ve been driven by the fear of failure,” head coach Paul Simmons said. “God showed me this year that when your motivation is fear, there’s a ceiling to how far you can go. The Bible says ‘perfect love drives out fear’. Having that fear of failure being removed and replacing it with love is a big part of what happened this year.”

According to Simmons, football has many seasons and is much more than a game. Improving a 0-3 record to become national semifinalists, this season has been all about the young men and how they have responded.

The Bisons faced the task of playing without starting junior quarterback Terrence Dingle due to a violation of NCAA rules, while also facing the best passing offense in all of Division II, Texas A&M-Commerce.

​“I know there will be critics that jump on board,” Simmons said. “But I will tell you what we don’t need: more critics. We need mercy and encouragement. That’s what I’m looking for.” ​“I prepare every week to be the guy if Terrence gets injured,” Payden said. “He had big shoes to fill. It was a lot of fun to start out there. I had a good time, but it was just another game.”

The Bisons started with senior running back Grant Kimberlin scoring a touchdown within the first 5 minutes. After that, it was an uphill battle. The Texas A&M-Commerce Lions quickly came back to tie it up and continued to make key stops against the Bisons’ offense.​ Harding did not score in the second or third quarters.

“On offense the goal isn’t to have big plays on every single play,” Kimberlin said. “Our goal is to make everyone on the defense quit, and their defense did a great job at stopping us. Those drives don’t get our heads down. We have guys on the field that love each other, like coach said, and we just say ‘okay, next drive’.”

Senior kicker Tristan Parsley had an 83-yard punt in the second quarter that broke the previous Harding record of 82 yards set by Andrew Patton against Southwestern Oklahoma in 1999.

“Even late in the third we knew it’s up to God if he wants us to win the ballgame,” Simmons said. “We honor him in how we do things even if we don’t win, especially if we don’t win.”

In the fourth quarter, Harding came within 3 points of Commerce when freshman Cole Chancey rushed 1 yard for a touchdown to make it 14-17. Shortly after, the Lions responded with a touchdown.

“This team doesn’t have negative thoughts,” senior defensive lineman Danny Harry said. “If one person makes a mistake we hold behind them. We go back out there and say ‘let’s do this again.’”

Parsley made a 30-yard field goal late in the fourth quarter to make it a one-possession game at 17-24. A 90-yard touchdown sealed the deal for the Lions, making the end score 31-17.

“Losing the game today does not take away from the blessing we have received this year or the memories that have been made,” Simmons said. “It’s been unbelievable. We have a locker room of special Bisons. We have a small senior class. We have guys that have left an awesome legacy (in) this program.”

The Bisons’ fairytale run may be over, but the mission of the brotherhood will carry on: to cast out fear by loving your brother. Senior running back Zach Shelley plays during the NCAA national semifinals on Dec. 9. Just the Clax | Pigs and Blankets