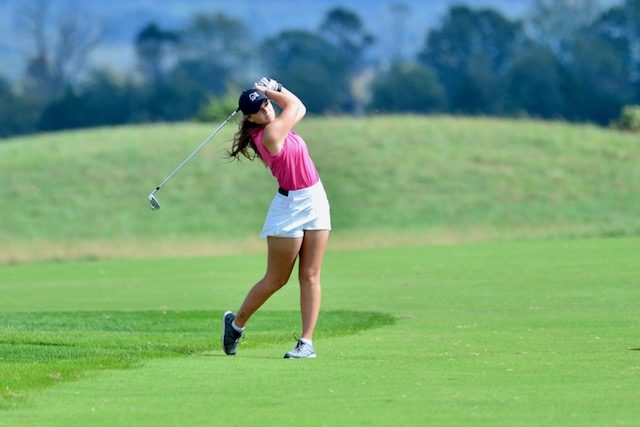 The women’s golf team finished first out of nine participating teams on Oct. 15 and 16 at the Lady Panther Fall Tournament in Bolivar, Missouri. Coach Dustin Howell has enjoyed the success.

“There is no doubt that winning has been the best part of the season,” Howell said. “I’m extremely pleased with the fall progress we have had. It’s been a great October.”

When looking back at the season as a whole, senior Katelyn Walker said that she has seen a lot of growth and improvement within the team.

“Overall, we have a better mindset and mental game as a whole,” Walker said. “I think that getting these first and second finishes has given us a much-needed drive to work harder and has given us an even stronger desire to obtain top finishes in the upcoming tournaments.”

Junior Brooklyn Terry (ranked No. 40) and freshman Kiera Smith (ranked No. 55) have found success in their first season as Bisons, and the return of sophomore Bryle Alcorn (ranked No. 40) from injury has been huge for Howell’s team.

“These three ladies have each led the Lady Bisons individually in tournament this season, with marked improvement along the way in team finishes of 12th, ninth, second and first,” Howell said.

Alcorn attributes a lot of her individual success to her team’s support and Howell’s continuous encouragement.

“The team is my biggest support system,” Alcorn said. “They are constantly encouraging me to strengthen myself by showing me how far I have come from this time last year.”

Walker is also very proud of her team. Her pride comes from watching the improvement she has seen this season and from seeing the evolution of the team over the last four years she has played for the Lady Bisons.

“Our team has been blessed to have new players each season that have really stepped up and been committed to the program, as well as constant improvement and dedication by returning players,” Walker said. “In the time that I have been here, I think that our team has evolved into a more goal-oriented and hardworking group of girls.”

When thinking back to the most memorable moment of the season, Walker said watching the team claim victory last week in the Lady Panther invitational tournament was definitely the highlight.

“Golf is just as much as a team sport as it is an individual sport,” Walker said. “It was awesome getting to see our girls encourage and rejoice with each other after reaching this goal as a team.”

According to the Central Region Rankings, the Lady Bisons are currently ranked No. 13, with their goal being to reach the top 12 to advance to the Regional Tournament in May 2018.

“I have a great sense of pride in seeing our hard work paying off,” Howell said. “The season is far from over, and we have not yet reached our full potential. That’s the most exciting part.”

The Lady Bisons wrapped up their fall season with the Lady Reddies Fall Tournament in Hot Springs, Arkansas, on Oct. 23 and 24. They will pick up spring play on April 2 and 3 at the Lady Argonaut Tournament in Pensacola, Florida.

The Gram Slam | A Sense of Camaraderie