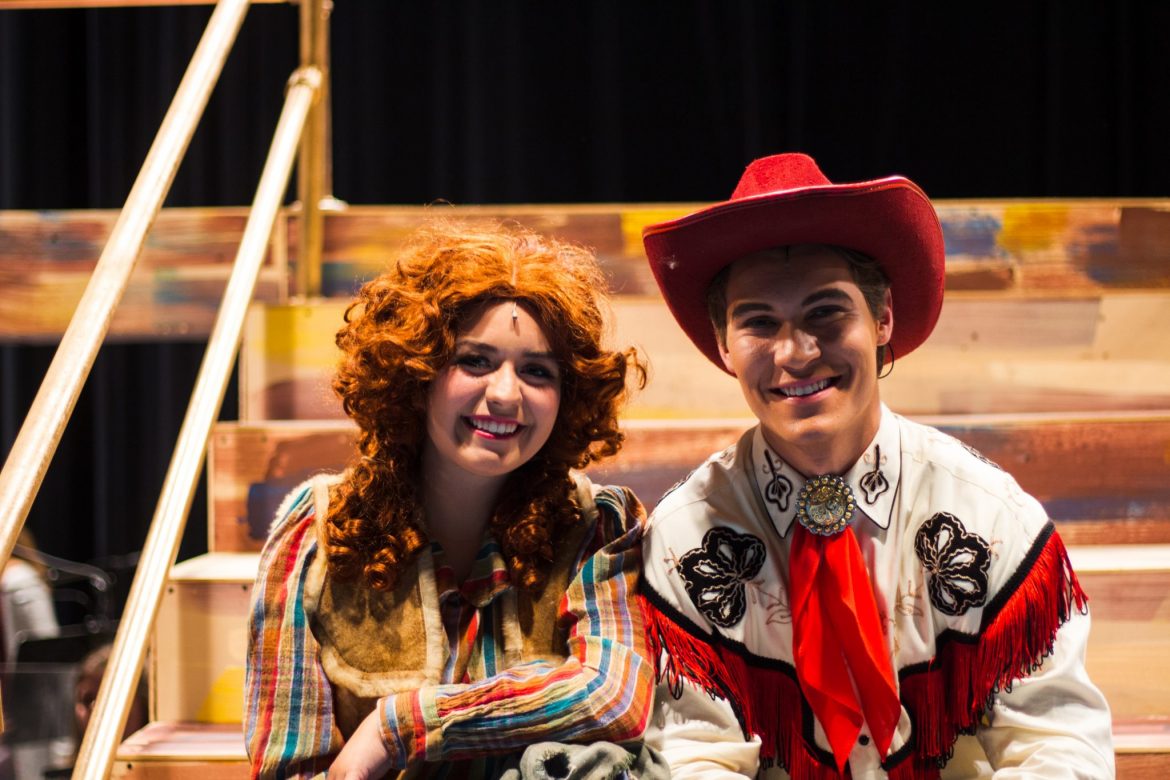 Freshmen Allie Scott and Max Ross portray Annie Oakley and Frank Butler in “Annie Get Your Gun.” This is the first time Harding has ever had freshman leads in the Homecoming musical. Photo by Macy Pate

The Department of Theatre is welcoming two new faces to the Benson stage in this year’s Homecoming musical, “Annie Get Your Gun.” Freshmen Allie Scott and Max Ross will take the stage for the first time as the leading roles Annie Oakley and Frank Butler.

This is the first time in Harding’s history that the two leading roles in the Homecoming musical have been portrayed by freshmen.

Although they are new to the theater program, director Britton Lynn said that he never had any doubt in the newcomers’ ability to take hold of these challenging roles.

“We’ve never cast freshmen as leads before simply because we hold auditions in the spring before the musical in the fall,” Lynn said. “The freshmen aren’t on campus … This year, as we started the audition process for the leads, it was at almost the same time that we were auditioning our freshman class for scholarships … and as we were looking at the different talent pools we thought, ‘I wonder if we should look at a freshman.’”

Lynn said the department was apprehensive at first, having never done anything like this before.

“This is a year of firsts,” Lynn said. “It’s my first time directing the Homecoming musical. When we got into the process, there were a lot of things that we said, ‘well, we’ll do it this way because this is the way it’s always been done.’ But because there were a bunch of new people, we thought, ‘maybe we can do it differently; maybe we can try something new.”

Both Scott and Ross said they are excited for this opportunity during their first year at Harding.

“It was really different to come into my first semester of college and to kind of have a leadership position, especially in a department that I imagine myself spending quite a bit of time in the next four years,” Ross said. “I thrive on a busy schedule so coming in and jumping straight into something was a really nice way to transition into college and to adapt to being so far away from home.”

Scott, an active participant in theater since the age of 6, is playing the principle role in the production and she says she could not be more excited to portray such a strong and vibrant character.

“Annie Oakley is very fiery, she’s very sassy, she’s very direct,” Scott said. “She goes for what she wants and she figures out a way to make it happen, and that’s very inspiring to me.”

Scott also says that portraying a historical figure has been a new and exciting experience.

“It almost makes it more meaningful,” Scott said. “I’m portraying someone who actually lived and who was breaking the stereotypes of women shooting guns back in the 1800s and being really good at it. She’s pushing a lot of stereotypes and changing American culture.”

Both Ross and Scott say that they want their experiences to inspire other new students to plunge headfirst into theater at Harding.

“I would just encourage people who’ve thought about doing theater but are hesitant. I’d definitely say to do it,” Scott said. “One of my favorite things about acting is being a storyteller and getting to put myself into somebody else’s shoes. It really helps with empathy and seeing things from other people’s perspective. Through understanding a character, you can gain real life skills about understanding people, and I think that’s incredibly valuable.”