Home Sports Looking Back at a Record-Breaking Year in Sports

Looking Back at a Record-Breaking Year in Sports 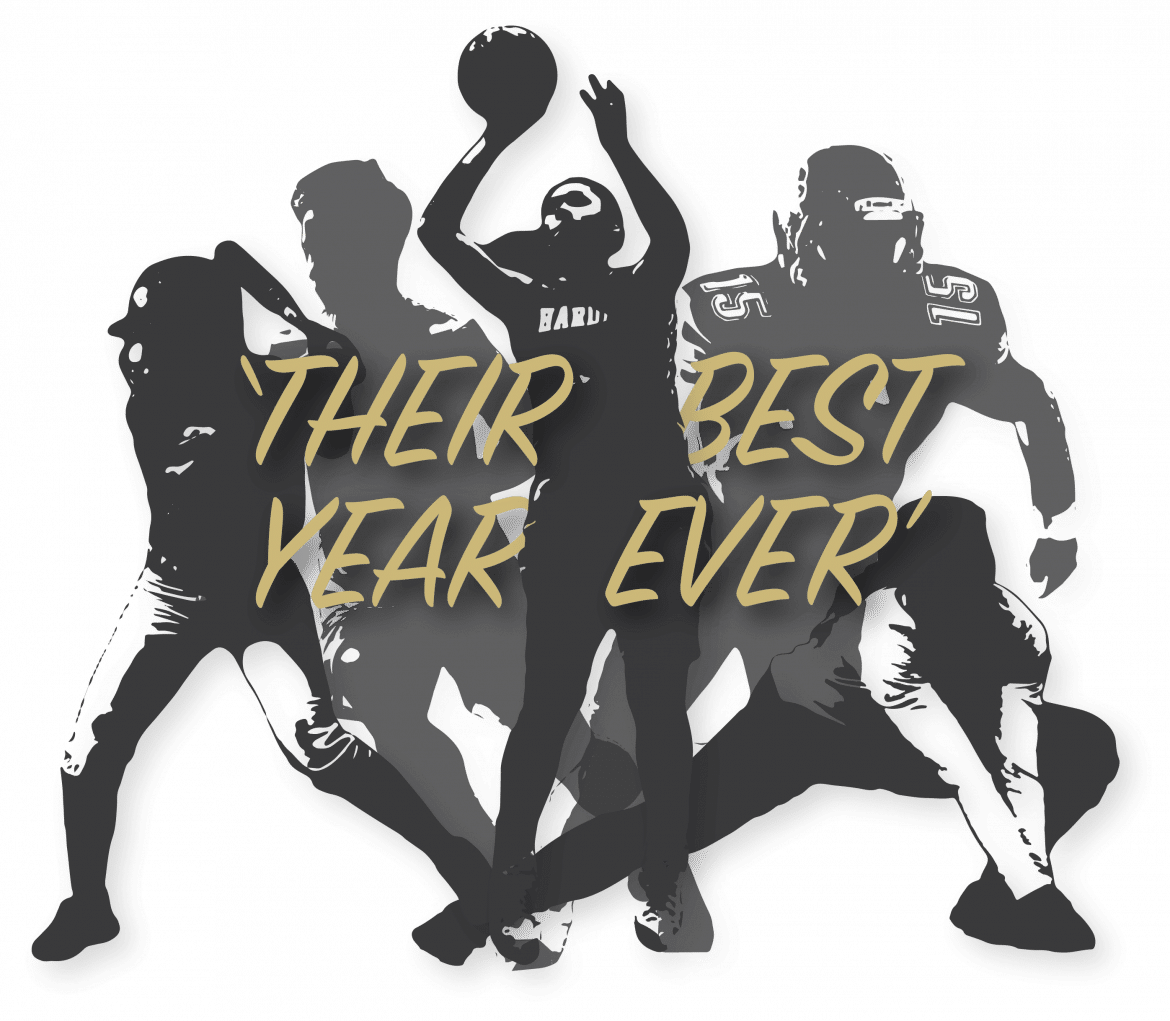 “This year has been a reflection of Harding as a whole,” former head football coach Ronnie Huckeba said. “You have to have a culture in place in your athletic program that tries to reflect the mission of the university. You’re not guaranteed to have a year like this one every year. But I believe we are at a place, culture wise, in our athletic department where we can expect to be successful. We are in a really good place, and I love it.”

It all started on Saturday, Nov. 5, when the women’s soccer team won their second straight GAC championship by defeating Southwestern Oklahoma State University (SWOSU) 6-5 on penalties.

“It was nice to have that championship win like that, especially for our seniors,” head coach Greg Harris said. “They are the class going out with two championships, and we plan on using that as motivation for next year. Right now we are looking to see who is going to step up and be the leader(s) next year. We aren’t trying to replicate what we did this past year or the year before. We just want to use each person to their strengths to try and make this team the best it can be.”

With this win, the Lady Bisons would qualify for the regional NCAA Division II tournament but would fall short, losing 3-1 to No. 24 Fort Hays State University. This conference championship kick-started a weekend where Harding athletics would win three GAC titles.

“All of this is just going to make us better,” Harris said. “We don’t talk about wins or losses, and it wouldn’t surprise me if the other teams did the same. We just want to focus on being the best we can be, and we just try to make each other better. It has been a phenomenal year with a great group of young men and women.”

Only a few hours later on Nov. 5, the Harding football team would win their tenth game of the season and seal the outright GAC title for the first time in school history. They did this by defeating Northwestern Oklahoma State University (NWOSU) 24-7.

The Bisons finished the regular season with an undefeated record of 11-0. This was former head coach Ronnie Huckeba’s final season with the team, handing the reigns over to then-defensive coordinator Paul Simmons.

“If I had to sum this year up in one word it would be ‘blessing,’” Huckeba said. “It has been a tremendous blessing to me, our team and to Harding. We had a lot of high points, and it would be difficult to try to name them all. It was a tremendous way for me to end my coaching career, and I feel very blessed to have been able to coach at Harding for 31 years, and it was a tremendous year that I will never forget.”

After winning the conference and going undefeated, Harding had the opportunity to host its first ever playoff game against No. 20 University of Central Missouri. The Bisons would go on to get their first ever playoff win, defeating the Mules 48-31.

For the second round, the Bisons travelled to Sioux Falls, South Dakota, where they took on the No. 4 University of Sioux Falls Cougars. Harding would have to come from behind in the fourth quarter, and was able to send the game to overtime after junior kicker Tristan Parsley kicked a game-tying 47-yard field goal with six seconds left. In overtime, senior linebacker Benjamin Shields intercepted a Bronco pass, and Parsley was able to convert a game-winning 35-yard field goal on the following possession. This sent the Bisons on to the quarterfinals of the playoffs, where they would lose to the eventual national champions, Northwest Missouri State Bearcats.

“We worked really hard to build the culture that is in place,” Huckeba said. “I had tremendous support from our coaches, and it was definitely a team effort. We had an incredible senior leadership, and all of that went together to put together a culture that was very successful.”

To close out the weekend of Nov. 5-6, the men’s soccer team was able to defeat Oklahoma Baptist University (OBU) on Sunday, Nov. 6, to win the program’s first ever conference title.

“It was exciting, but it was something that we didn’t really talk about at the beginning of the year,” head coach Jon Ireland said. “We didn’t talk about winning a conference championship, having the best year in school history or breaking records. Our focus was to take it one day at a time and to focus on what we can control. Now we’re focused on next year and trying to do big things again.”

This was Ireland’s first year as the head coach of the Bisons soccer team, coaching them to their first ever winning season with 14 wins and their first GAC title. This was also the third conference title in two days for Harding Athletics.

“A year like this allows you to start shooting for the stars a little bit more,” Ireland said. “It shows the guys what we can do now and what we can shoot for in the future.”

The Lady Bisons volleyball team claimed their third regular-season GAC championship on Thursday, Nov. 10 by defeating the University of Arkansas-Monticello (UAM) in four games. This was the fourth conference title won by a Harding athletics team in the 2016-17 season. This win gave Harding the No. 1 overall seed in the GAC tournament, but the Lady Bisons’ tournament championship hopes fell short when they lost to Southeastern Oklahoma State University (SEOSU) in five games in the first round of the tournament.

After football season ended in December, it was time to shift over to basketball. By this point in the season, the Lady Bisons basketball team was already 4-0 in conference play, and they were just beginning their historic run to the Final Four.

“The total Elite Eight experience was amazing,” head coach Tim Kirby said. “I think everybody left there wanting to try to do that again. Hopefully building off of some of this success is something that will happen. Every team is different, and I think this year’s team has something pretty special that I think they will remember for a very long time.”

The Lady Bisons would finish 21-1 in the GAC going on an 11-game win streak, losing to SWOSU by one point on Jan. 26, and then closing out the season on a ten-game win streak before winning the GAC championship. Harding defeated Arkansas Tech 75-73 on a game-winning shot from sophomore center Sydnie Jones, who finished with 30 points for the game.

This win would send the Lady Bisons to the regional tournament, which they held in the Rhodes-Reaves Fieldhouse. Harding won their first two games to advance to the regional championship against No. 6 Emporia State, where they would come from 18 points down in the third quarter to win the game 58-56, giving the program its first regional title and advancing them to the Elite Eight in Columbus, Ohio.

Harding was the No. 4 seed in the Elite Eight and took on the No. 5 seed Queens College Knights out of Queens, New York. They won that game 73-69 to advance to the Final Four where they lost to the No. 1 seed and eventual national champions Ashland University 90-77, bringing their historic run to an end, but continuing the historic year for Harding sports.

The Harding softball team added another conference championship trophy to this year’s repertoire when they clinched the GAC regular season title after defeating UAM in a doubleheader on Sunday, April 23. These two wins put the Lady Bisons at 45-5 overall and 35-3 in the conference.

In the fifth season of the program, this is the most successful season the softball team has had. It began when the team went on a GAC-record 26-game winning streak before losing 1-0 to East Central University (ECU). After taking the series against ECU with three wins and one loss, the Lady Bisons went on to sweep the No. 7 team in the nation, Southern Arkansas University (SAU), which catapulted the Lady Bisons into one of the top rankings in the country. As of April 19, the Lady Bisons are ranked No. 2 in the nation and No. 1 in the region, the first time in program history to be ranked this high in both polls.

To close out to what is probably the greatest year in the history of Harding athletics, both men’s and women’s track teams won their second straight conference title. Harding hosted the championship meet, and this is the second year of the GAC championship meet.

The teams had five combined individual winners and head coach Steve Guymon won the coach of the year award for both men and women. Both teams also combined for 15 athletes that received scholar-athlete honors.

Needless to say, it has been a year full of victory and excitement for Harding athletics. While these seven teams were able to win some sort of conference title, all of the athletic teams had a season that they can look back on and remember.

“2016-17 has been a perfect storm for sports at Harding,” sports information director Scott Goode said. “We have had a tremendous group of seniors that have landed on these teams, and you feel like the leadership and the success has come from these seniors. It has kind of been hard to catch our breath because there hasn’t really been any down time where we aren’t trying to promote several of these teams having, what some might consider, their best year ever.”