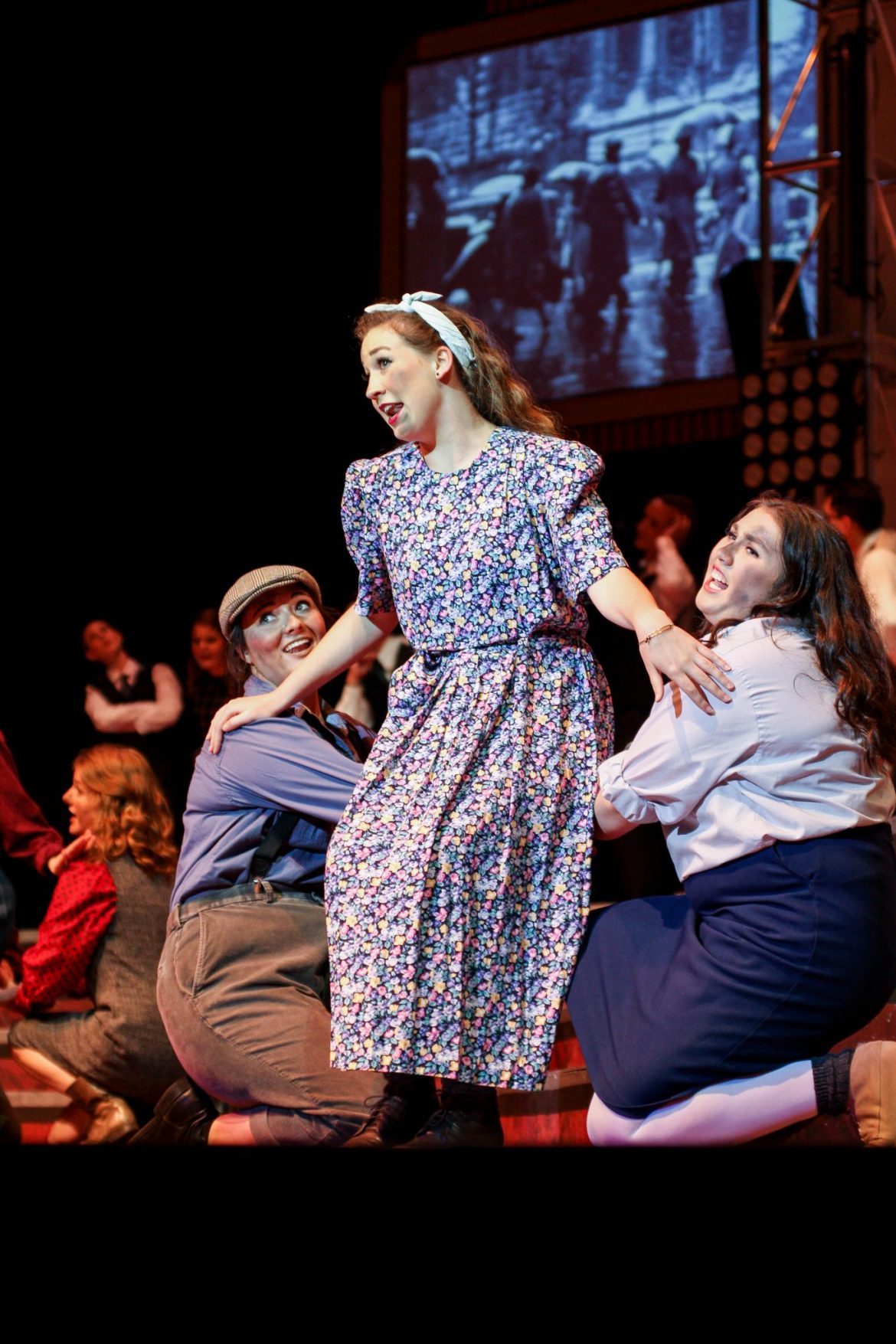 A little taste of the New York theatre scene is making its Searcy debut this weekend in the form of Spring Sing 2017: “Curtain Up!”

This year’s opening number, an adaptation of “Bigger” from the 2013 Tony Awards, reminds us that there is a “kid in the middle of nowhere sitting there living for Tony performances … So we might reassure that kid, and do something to spur that kid, ‘cause I promise you all of us up here tonight: we were that kid.” In fact, senior Delta Gamma Rho club show director Caroline Nelson was that kid — except she was living for Spring Sing performances, even before becoming a Harding student.

“I remember when I first saw Spring Sing, I was on the fence about coming to Harding,” Nelson said. “But they had fire and confetti and more people than you could count on the stage, and I just said, ‘Whoa. OK, this is interesting.’”

Theatre professor and Spring Sing set designer Ben Jones said he had a similar experience the first time he was involved in Spring Sing as an ensemble performer in 1994.

“I will never forget what it felt like to hit the final pose of the finale,” Jones said. “We were all around the hosts and the hostesses, and I happened to be one of the ones kneeling down right in front doing jazz hands and all that junk … And what people don’t understand is that the sound of 4,000 people clapping, I mean, you can feel that. Not just hear it, you can actually feel the applause. That changed me.”

The theme this year, according to director Steven Frye, celebrates the impact Broadway theater has had on generations both past and present. For freshman theatre major and ensemble performer Ava Galyean, whose mother traveled with a touring show of “Shenandoah” and was involved in various cabarets around New York City, theatre has been an important part of her life right from the start.

“I have home videos of me in our New York apartment singing songs from ‘Cats’ and dressing up as Dorothy from ‘The Wizard of Oz’ for Halloween,” Galyean said.

The beauty of Broadway in particular, Galyean said, is that the stories remain relatable over many generations.

“As art and society and times change, so does our music and taste, and that’s reflected in our most popular Broadway musicals,” Galyean said. “Shows like ‘Hamilton,’ ‘Dear Evan Hansen’ and ‘Waitress’ are all very modern in style of music and so different from classics like ‘Oklahoma,’ ‘Annie Get Your Gun,’ or ‘Carousel.’ But they all have great stories everyone can listen and relate to in some way.”

According to Steve Frye, “Curtain Up!” is a party in the Benson with 1,000 of his closest friends. This year, the Broadway-themed ensemble numbers are interspersed with club performances ranging in content from the secret backstory of Chick-Fil-A’s bovine mascot to the stock market crash of 1929. Despite the variety of subject matter, freshman Iota Chi women’s club performer Sydney Sanford said that the magic of theatre is that it tells stories from the past, present and future, and it is not stuck to any rules of how it should be done.

“Our Spring Sing show, ‘Women of World War II,’ has been highly influenced by the musical ‘Newsies,’” Sanford said. “Those boys were strong and fought for what they wanted … Our characters are the women who ran America while the men were gone in World War II, who wanted to show the rest of the world that we are strong enough to fight for what we want and to take care of who we love.”

According to Sanford, the stories told in Spring Sing — and in live performances everywhere — always have a sense of real life to them, no matter how bizarre they are.

Nelson said the first show she ever saw on Broadway was “The Little Mermaid.” After leaving the theater, this 14-year-old girl knew she would never be the same.

There are infinite ways to tell a story, according to Nelson, and every Broadway story — as well as every Spring Sing story — is wonderful and beautiful in its own way.

“My 15-year-old sister never really listened to showtunes until ‘Hamilton’ came around,” Nelson said. “Now, she knows literally almost every word to every song. As long as there are stories to tell, now moving towards fresh and relevant ways, theater and Broadway will always thrive.”

Social Clubs use Spring Sing to Give Back