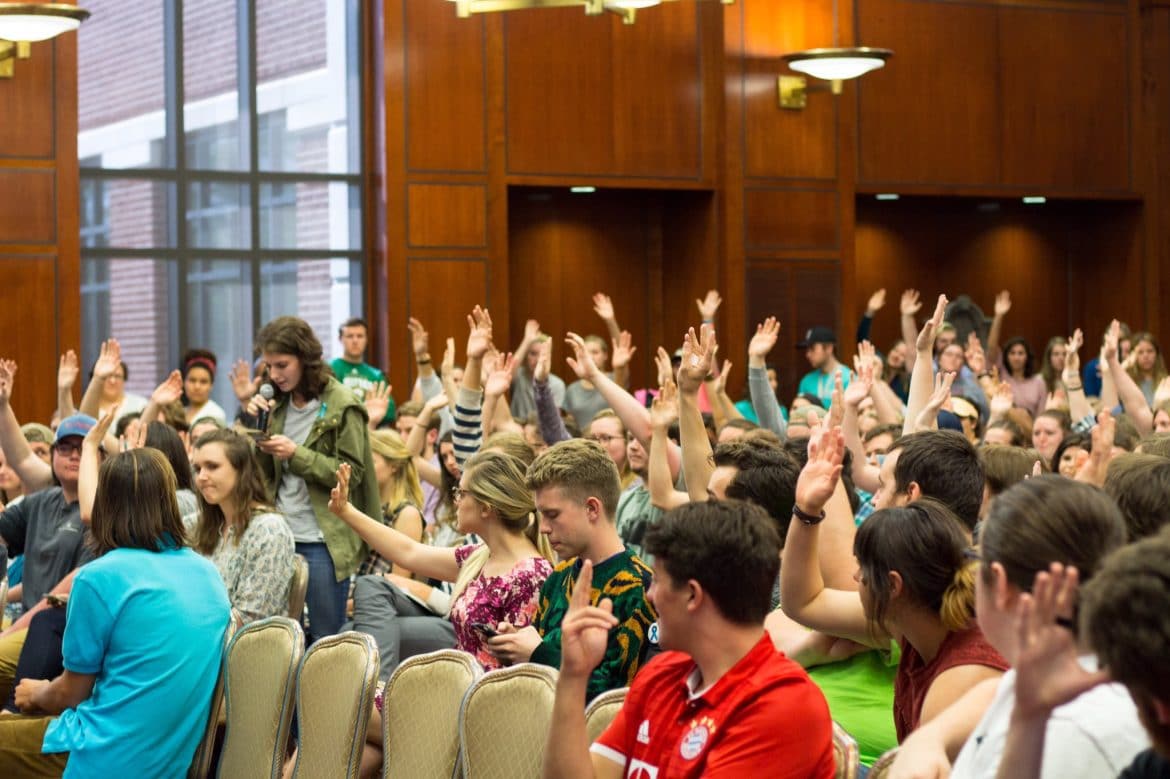 The Student Association (SA) hosted its annual Town Hall meeting in Cone Chapel on April 12. Approximately 200 students, faculty and staff attended the event and discussed concerns about sexual assault prevention as well as gender roles regarding spiritual leadership. Town Hall meetings are designed to be an open discussion among Harding students and the administration by providing a panel of faculty and staff from various aspects of student life.

The first student to speak was junior Chloe Goodman, who addressed her concerns with sexual assault on campus and how it is presented to students. She argued that the Department of Public Safety portrayed an inaccurate message advertising its women’s self-defense classes during Sexual Assault Awareness Week with posters reading, “Don’t be a victim!”

“This victim approach is inappropriate with Sexual Assault Awareness Week because it perpetuates not only the idea that we are responsible for not being raped, but that if we are raped, it will be in a context in which we will have the compulsion to physically fight back. It perpetuates the idea that assault and perpetual assailants are jumping out from behind the bushes,” Goodman said. “Sexual Assault Awareness Week should be about teaching people not to assault others and should be about changing the culture we live in.”

Neal and Russell acknowledged the “unintended consequence” of the public safety campaign. Russell apologized for the miscommunication and stated that public safety is constantly looking for ways to make campus safer. Neal encouraged students to express suggestions to the Office of Student Life.

“(Sexual Assault) Awareness month is actually a springboard to find out what you think will be best,” Neal said. “My opinion would be that we intended to not have a specific plan … before we actually raised awareness to bring people’s voices in a stronger way. … I think this is the start of a conversation, not the end of a conversation.”

The latter majority of the meeting consisted of several students expressing concerns within Harding’s gender policy in spiritual leadership. Senior Sarah Roe introduced the topic, commenting on the prohibition of women reading Scripture during the Transforming Word of God event hosted by the SA on April 10.

“We are seeking to understand and discuss the decision not to have women read,” Roe said. “This decision did not seem consistent with other practices on campus, such as women reading in Bible classes or chapel programs involving women.”

McLarty apologized to the student body and said he made the decision to not allow women to speak because he was unsure of the context of the new event.

“The first thing I want to say is, my bad,” McLarty said. “This is me, and this is where the buck stops, and this is where what happened, happened and why it happened. … Having not seen what it was, I made the wrong call, and the next time we do this, I think students of both genders will be free to read in something like that.”

Junior Connor Botes responded in questioning the clarity of rules of the university presented to students. He said the university’s statement regarding male spiritual leadership is unclear and requested a more formal and direct statement be provided by the university. Several other students addressed similar concerns regarding misogyny and open door policies.

According to McLarty, Harding’s identity and policies are determined by the Board of Trustees, who are willing to listen to student concerns. He said students volunteer to be part of the university and its identity when they choose to enroll at Harding.

“The identity of the university is not up for a vote,” McLarty said. “The board is free to say, ‘This is who we are, this is where we stand.’ … Universities by their nature are very slow to change. … There has been a lot of change (in the university) because of just by being aware, responding, listening (and) adapting in the important ways, and then there are some things that don’t change, and I guess that’s the trick of it all.”

How to Combat Springtime Allergies

The Art of Being