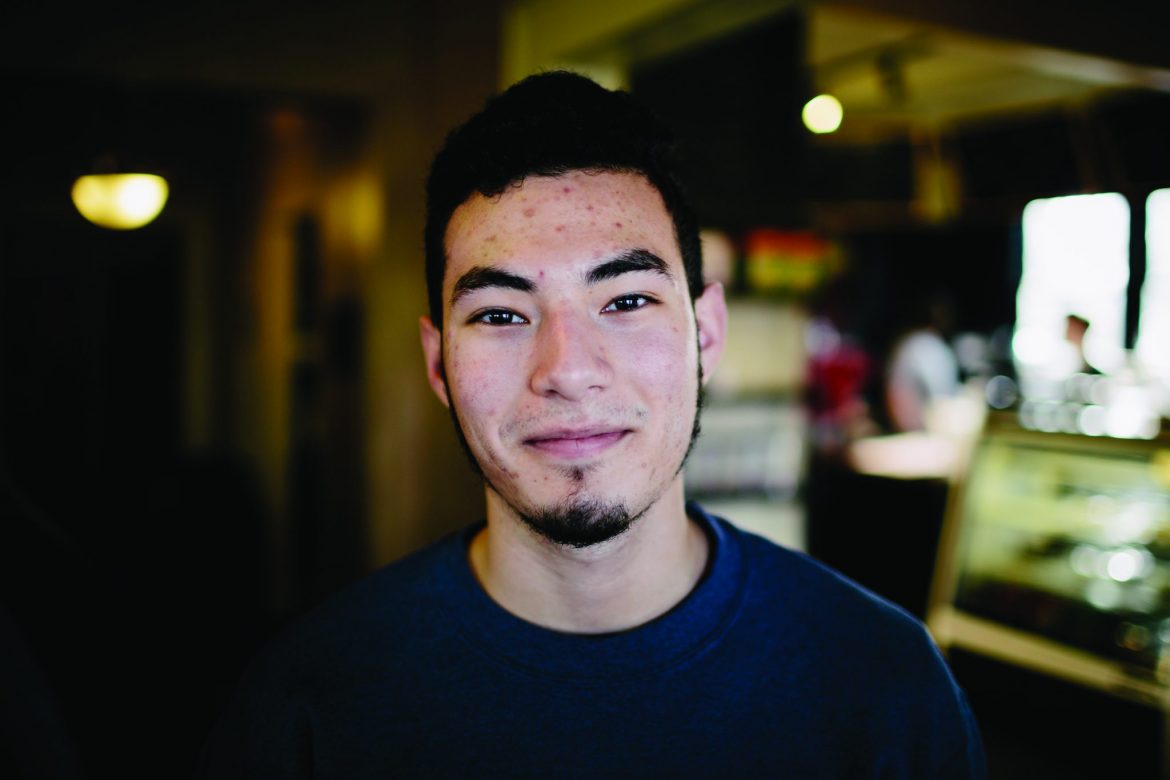 Junior Juan Prieto left his home country of Venezuela in 2015 to study at Harding after conflicts with the Venezuelan government. His immediate family has since settled in the U.S. and applied for political asylum. - Photo By Amanda Floyd

Students gathered in a schoolyard in Zulia, Venezuela, for their morning routine of prayer, announcements and singing of the national anthem on a January day in 2014. It was the senior class’ turn to hold the flag and lead the students, faculty and staff in song.

Junior Juan Prieto stood on a balcony with his classmates as the rest of the student body turned their gaze on the flag they held. Following their previously planned statement, the seniors halted the anthem and flipped their country’s flag upside down — a sign of rebellion.

“That day we were all kind of nervous about it, and we weren’t sure if we were going to do it,” Prieto said.

The school director prohibited Prieto and his classmates from attending school for the day. He did not want them to lead by example. The students took advantage of their day off and led a peaceful protest in front of the school. Some parents joined the students in making a statement against the government they considered unfair and corrupt.

“Venezuela is a very beautiful country,” Prieto said. “Sadly, however, the government is not the best. The situation in Venezuela has been tyranny.”

According to The Washington Post, Venezuela depends on oil for 95 percent of its export revenue. The Post reported Venezuela’s oil exports have fallen by half in recent years, which has weakened the country’s economy.

The New York Times reported consistent inflation and increased government control in a response to the declining economy. After spending the afternoon in front of the school, the teenagers later joined university students who were protesting in the plaza at the center of the city.

Soon after, Venezuelan soldiers gathered at the plaza, too. During their protest, the students held signs condemning the current Venezuelan president, Nicholas Maduro. According to Prieto, the choosing of Maduro was a result of the previous controversial leader, Hugo Chavez.

Papers with handwritten messages were meant to criticize Maduro’s lack of college education. According to Prieto, the soldiers remained standing around the plaza for approximately three hours before they began approaching the protestors, who took a step closer to them. The soldiers pulled out their weapons.

“We got closer and closer, and they said, ‘No, you’re not going,’ so they pulled their guns out and they were just holding their guns,” Prieto said. “We all got scared, but we didn’t leave … I guess the soldiers had to be there until we left, so they pointed at us, but they didn’t shoot … that made us really nervous.”

According to Prieto, a motorcycle coincidently drove by as the soldiers held their weapons. A pop from the engine mimicked a gunshot, scattering the people.

Prieto and his friends decided to flee the scene.

“When I started running, I felt a soldier grab me by the shirt, and they kind of pulled me in, and I said, ‘I wasn’t doing anything, just let me go so I won’t have any charges against me,’” Prieto said. “I was so confused, I was kind of still in shock.”

Prieto said his father was passing through and intervened between him and the soldier. The soldier then beat his father, perhaps as punishment for obstruction of justice, Prieto said.

“I really couldn’t do anything,” Prieto said. “I was screaming for help, I was pushing their shoulders, but I was not as strong as they were. That’s when the university students came over and kind of helped us out.”

Prieto said his family was then harassed by federal soldiers for six months. The soldiers followed the family, drove around their neighborhood in military vehicles and allowed strangers to live on the empty lot where they planned to build a house. In hopes of alleviating the harassment, Juan Prieto’s parents agreed to allow him to study in the U.S. He began applying to a list of U.S. schools; however, the government withheld his high school diploma after graduation, which did not allow him to fulfill requirements and meet deadlines for the colleges he applied for — except Harding.

The second installment of this series will appear online at thelink.harding.edu on Friday, March 3.