‘My Life’ by Dr. Evan Ulrey 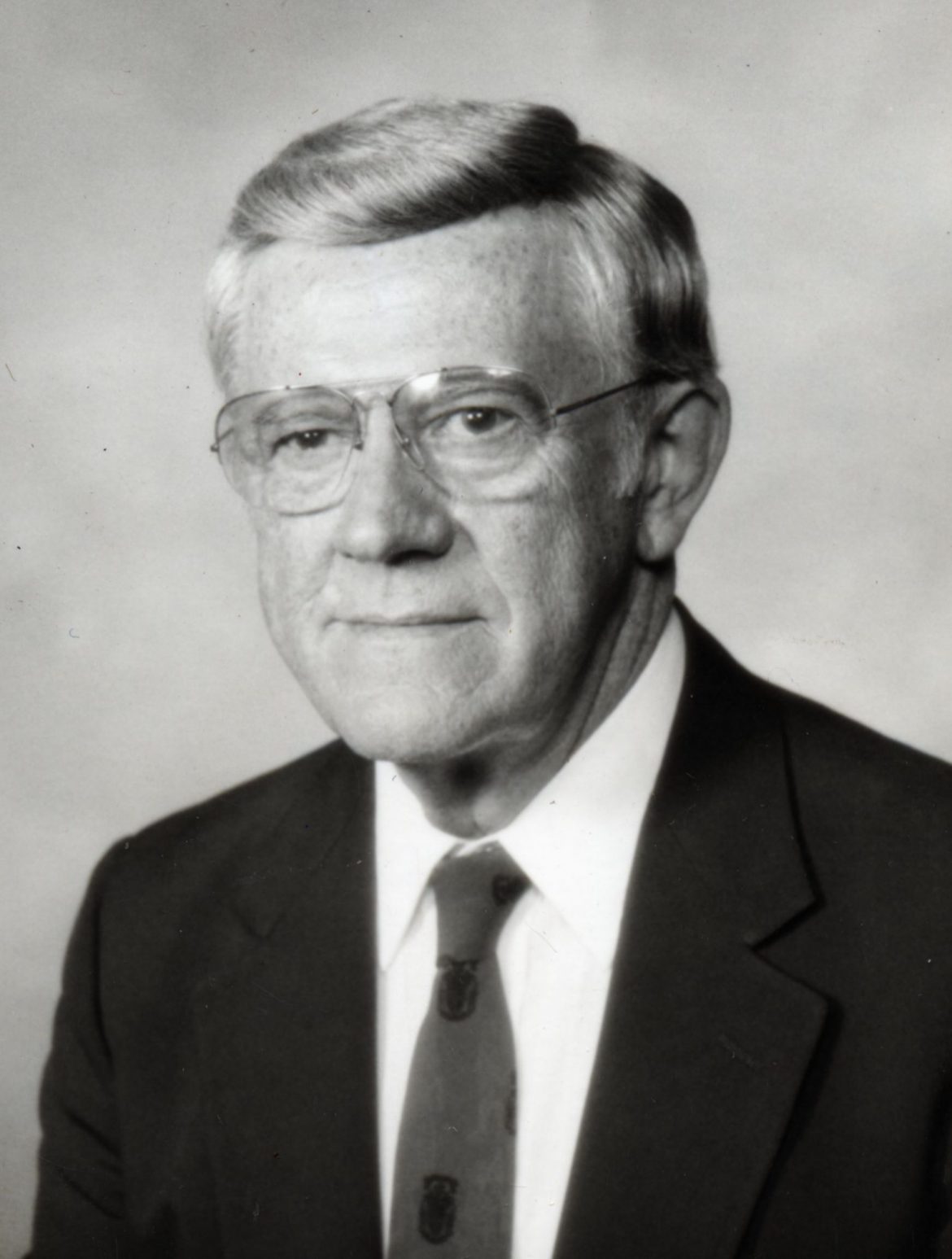 “I remember several incidents that happened while living in the family home when I was three or four years old — one was being bitten by the family dog and being taken to the doctor by my dad, where he bought me some caramel candy, which was a delight to me. The other memory is of being accidentally struck on the forehead with a corn knife by an older sister. The scar that resulted from this injury I still have until this day. The third incident was being struck on the head with a hoe by an older brother. This blow took a patch of hair from my skull.”

The above, as well as many of the paragraphs to follow, are excerpts from “My Life,” by Dr. Evan Ulrey — a brief autobiography written over 10 years ago and given to The Bison on Feb. 11.

“I was born the eighth of nine children of Arthur Melvin Ulrey and Mary Robinson Ulrey: Irma, Mildred, Wilma, Lee, Maurice, Rachel, Ernest, Evan and Betty. Melvin and Mary R. Ulrey lived together on a farm of 80 acres near Martinsville, Illinois. This farm was a gift from my maternal grandfather, John R. Robinson, who also gave 80 acres to each of his other four children. In this farm house, all nine children were born.”

Dr. Ulrey was the first chairman of the Harding University Department of Communication — previously the Department of Speech — a position he held from 1950 until 1987, when he stepped down to pursue full-time teaching. He retired in 1992. Dr. Ulrey has won numerous awards including Outstanding Teacher from the Arkansas Speech Communication Association (ASCA) in 1886, for which he received an engraved plaque with the following inscription: “A man of eloquence whose words are sweetly placed, modestly directed and well spoken.” He was chairman of the constitution committee for the Southern Speech Association, president of the National Council of Pi Kappa Delta forensics fraternity and editor of the “Speech in Arkansas” newsletter. He was also nominated for a 1968-69 Distinguished Teacher Award.

Dr. Ulrey has received some lighthearted nominations as well, including being roasted and honored as both “Best Director” and “Best Actor” at the ASCA’s rendition of the Academy Awards in 1987. During the presentation of the “Best Actor” award, Dr. Ulrey was described by Harding speech professor and debate team coach Pat Garner as a man who “acts like he knows what he is doing all of the time, even though he rarely does.”

Dr. Ulrey said that, before moving to Arkansas, he had intentions to be a preacher — this desire was especially prominent during his years immediately following high school when he lived in Ann Arbor, Michigan, with his sister Irma and attended the Dearborn Church of Christ.

“While worshiping at that church, I met several people … who had attended Harding College. It was through their influence that I decided to save my money and to attend Harding College in Searcy, Arkansas. In the fall of 1942, I began my trek to Harding and first went to visit my mother and father who had moved to a farm south of Casey, Illinois. My mother, who was in good health, was always a very good mother and an excellent cook. She was a good manager who always kept a number of laying hens and always took a basket of eggs to sell when she went to purchase food for the family. I remember that she bought my first suit for $15 which she had saved from her own industrious efforts. I wore that suit when graduating from high school and took it with me to college.”

Dr. Ulrey did not know anybody in Searcy when he first moved to the South, but making friends was not a problem for the Illinois native.

“I still remember attending worship in the auditorium on the second floor of Godden Hall. That is where I first saw J. N. Armstrong, the first president of Harding College, and met his wife, Woodson Harding Armstrong, a daughter of James A. Harding, after whom the college was named. She was one of my teachers and head of the speech department. They both had a tremendous influence on my life.

“While at Harding, I met some of my lifelong friends among whom were Cliff Ganus Jr., C. W. Bradley, Wyatt Sawyer, Harry Robert Fox, Tolbert Fanning, Buddy Vaughan (a roommate), all of whom were members of the Sub T-16 social club, which I was invited to join. When a senior, I was elected “Skipper” (president). Later when my son Robert was in college he also joined the Sub T’s, and when he became a senior, he also was elected “Skipper” of the Sub T’s. Other friends included Bob Helsten, Tom Formby, Virgil Lawyer, Bonnie and Betty Bergner (who became Mrs. Jim Bill Mclnteer).

“While a student, I became active in religious activities as a song leader and preacher. Consequently, Dr. George S. Benson asked me to participate in a campaign in North Carolina being led by himself and Andy T. Ritchie. I believe this was the first of such ‘campaigns’ in our brotherhood. Thousands of campaigns have been held since that time. After that first campaign, several of us helped with a campaign in Battle Creek, Michigan.”

While he was a student at Harding, Dr. Ulrey worked in the Pattie Cobb dining room washing dishes, and through hard work, he was able to graduate with only $400 worth of college debt. He also put his love for preaching to use and preached at Churches of Christ all around Arkansas, including Morrilton, Jonesboro, Bay and a mission point in Hammond, Louisiana.

“At Hammond I became acquainted with the Dodge dealer from whom I purchased my first new car — a blue four-door model which I was driving when I left Baton Rouge for Searcy in the spring of 1950 to assume the chairmanship of the Department of Speech at Harding.

“When I first came back to Harding in 1950, I was one of several single teachers who was looking for a mate. A friend suggested that I date Betty Thornton, who was editor of the student newspaper. I asked her to go to a high school social club dinner where I was to speak and to sing for their entertainment. Betty accompanied me on the piano when I sang. We had our picture made together that night in March 1951. From then on we dated every Saturday night until school was over in June. I went with her to her home in Sheridan where I asked her to marry me, and then I returned to Louisiana State University to work on my dissertation that summer. We wrote many letters, and when I returned in August, I brought her an engagement ring, and we decided to get married on Dec. 14, 1951.

Dr. Ulrey and Betty Ulrey were blessed with the birth of their first child on Aug. 30, 1954.

“On the 29th, a Sunday, I had gone to preach at Malvern, and when I returned Betty was at the Hawkins Clinic along with her mother and Dr. T. A. Formby, our family doctor and personal friend. He had met Betty there about 4 p.m. and stayed with her throughout the night. I got there about 11 p.m. Our baby was born at 4:20 that Monday morning, weighing 8 lb. 2 oz. and bearing a head full of black hair. In spite of forceps marks on her face, we thought she was the most beautiful baby in the world. We were thrilled to have a precious addition to our family. Perhaps that is why two years later we had another baby girl, this one born also on Monday, Aug. 20, 1956, but this time it was at 4:20 p.m. She had a little bit of blonde hair and blue eyes, and we named her Bonnie Beth. Dr. Formby also delivered this baby and helped see them through many ear infections and other childhood illnesses.

“Betty stayed at home with the girls while I continued teaching and preaching at various places on Sundays. We were very busy and happy, but then the Lord blessed us with another addition to our family. On July 26, 1960, our son, Robert Evan, came into this world weighing 9 lbs. 4 oz. He was our miracle baby because Betty had had some serious complications including the mumps during her sixth month of pregnancy, and then building antibodies (RH negative factor) against the baby. Dr. Formby was so concerned that he sent us to Little Rock to Dr. Robert Ross, who delivered our Robert, born in perfect health. In fact, when I first saw him in the nursery, Dr. Ross sat Robert up and called him a ‘perfect specimen.’ We have been eternally grateful for our three precious children.”

Dr. Ulrey was active at the College Church of Christ throughout his time at Harding.

“I became a deacon in 1966 and an elder in 1976. I have always had a special interest in the area of missions and served as chairman of the Missions Committee for many years. After the children got older, Betty and I took college students on numerous campaigns in Europe (Germany, France and England).”

According to professor of communication Dr. Jack Shock, Dr. Ulrey was known for investing in his colleagues, even the ones who were “young and green” at the time.

“I remember one day in 1987 when I walked into (Dr. Ulrey’s) office and said we need to go to Dallas and buy some of these new Macintosh computers,” Shock said. “He said, ‘Let’s go,’ and we flew to Dallas and bought four of the earliest Macs and a laser printer. He built a lab for us, which was one of the first in Arkansas. He invested more than $10,000 in the murky future of desktop publishing with little more than faith in me and some budget money he scraped together.”

Betty Ulrey, who was the first female editor of The Bison newspaper and fundamental in establishing the Student Association, worked for two years in the office of Public Relations and later taught English courses both in Searcy and in overseas programs.

“While occasionally we may have felt that we sacrificed by staying at Harding, in the long run we decided that the most important thing was to try to influence others for Christ and the best place for us to do this would be at Harding,” Betty Ulrey said.

Shock said he will always be grateful for Dr. Ulrey’s vote of confidence.

Betty Ulrey said that both her and her husband have loved spending their life in an occupation surrounded by young people searching for their place in the world.

“I enjoyed every day, month and year at Harding,” Dr. Ulrey wrote.