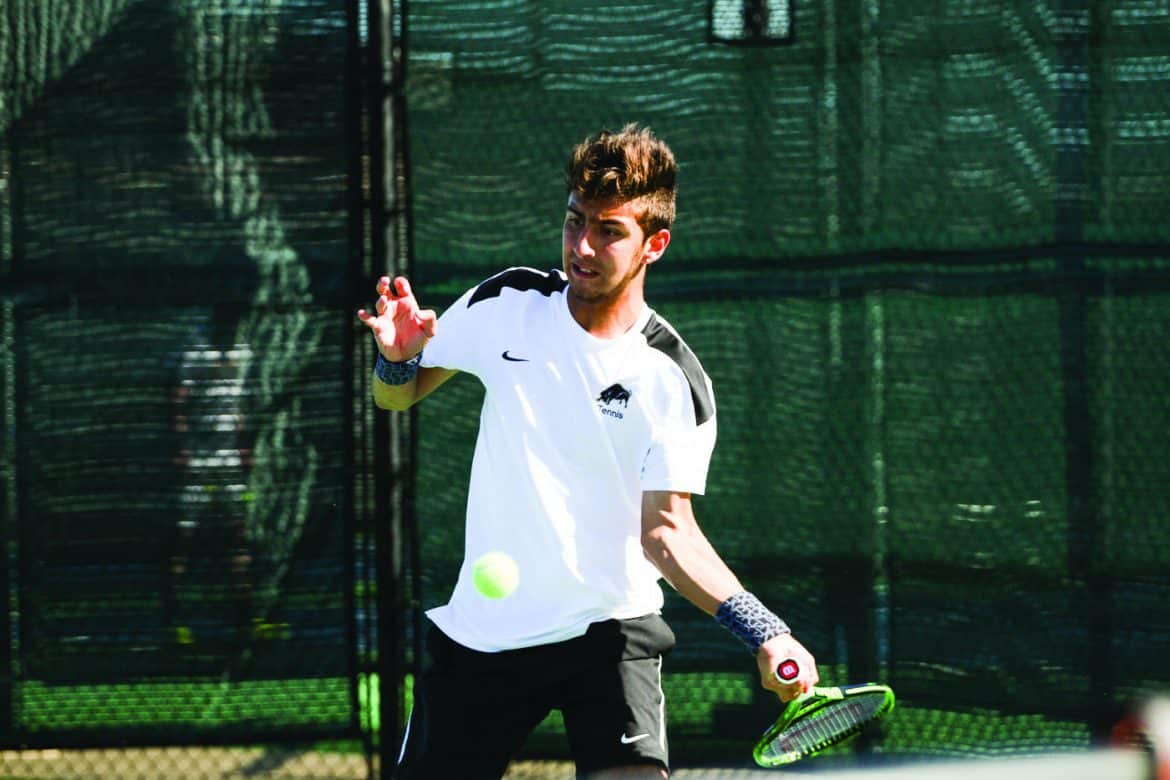 Both the Bisons and Lady Bisons tennis teams swept McMurry University in Dallas, Texas, on Saturday, 9-0.

The men started off their season Friday with a tight match falling to No. 5 Seward Community College, 1-8. Three matches came down to third set tiebreakers. Falling early in doubles 9-7 at line 1, 9-8 at line 2, and 8-3 at line 3, it became a tight battle in singles. Their lone point was at line 4 singles, where senior Neto Cacace defeated Alex Mosehle 6-2, 6-7, 10-2.

“The overall atmosphere this weekend was really great,” Cacace said. “Everyone was cheering from all different courts, even into singles.”

On Saturday, the Bisons bounced back. The men defeated McMurry University 9-0.

On Sunday the Bisons defeated Collin College 6-3 in Plano, Texas. The new duo of freshman Alejandro Sendra and junior Carlos Crisostomo at line 2 provided their lone point in doubles, winning 9-7.

The Lady Bisons also made their debut this season with a sweep against McMurry University on Saturday, 9-0. On Sunday, the women won 8-1 against Collin College, only losing one singles match.

With new players within both the men’s and women’s lineups, head coach David Redding has made adjustments and will keep looking for the best combinations.

“On the guys side, we lost two of our best doubles players from last season ,and right now we are struggling to find the right combinations with the new players that we have,” Redding said. “I feel confident though that we will eventually get to where we need to be.”

Having a total of four seniors, both teams have potential for growth.

“We definitely have the talent to go far this season,” senior Arielle Butler said. “We just need to keep believing in ourselves and supporting each other so we can get the job done.”

This weekend showed that the Bisons might have tough opponents, but they will always play their hearts out.

“Comparatively, we may not be equal in results or stats to other teams, but there will always be a high level of competition, ” senior Brandon Hogland said. “We can win any match at any time if we come to play.”

The men’s team is picked third out of four in pre-poll GAC rankings. The women are picked fifth out of seven.

“Winning conference and winning as many matches as possible is always the goal for me personally,” senior Piper Huey said. “My favorite memory was winning conference my freshman year, and I’d love to do that one more time.”

Conference play starts April 1 for the men against Ouachita Baptist at home. The women’s first conference match is March 25 against Southern Nazarene University in Bethany, Oklahoma.

“The bottom line is that I look forward to each and every match because each one is different and distinct, and I just love to compete,” Redding said. “I will have succeeded as a coach if I have instilled that attitude in all of my players.”