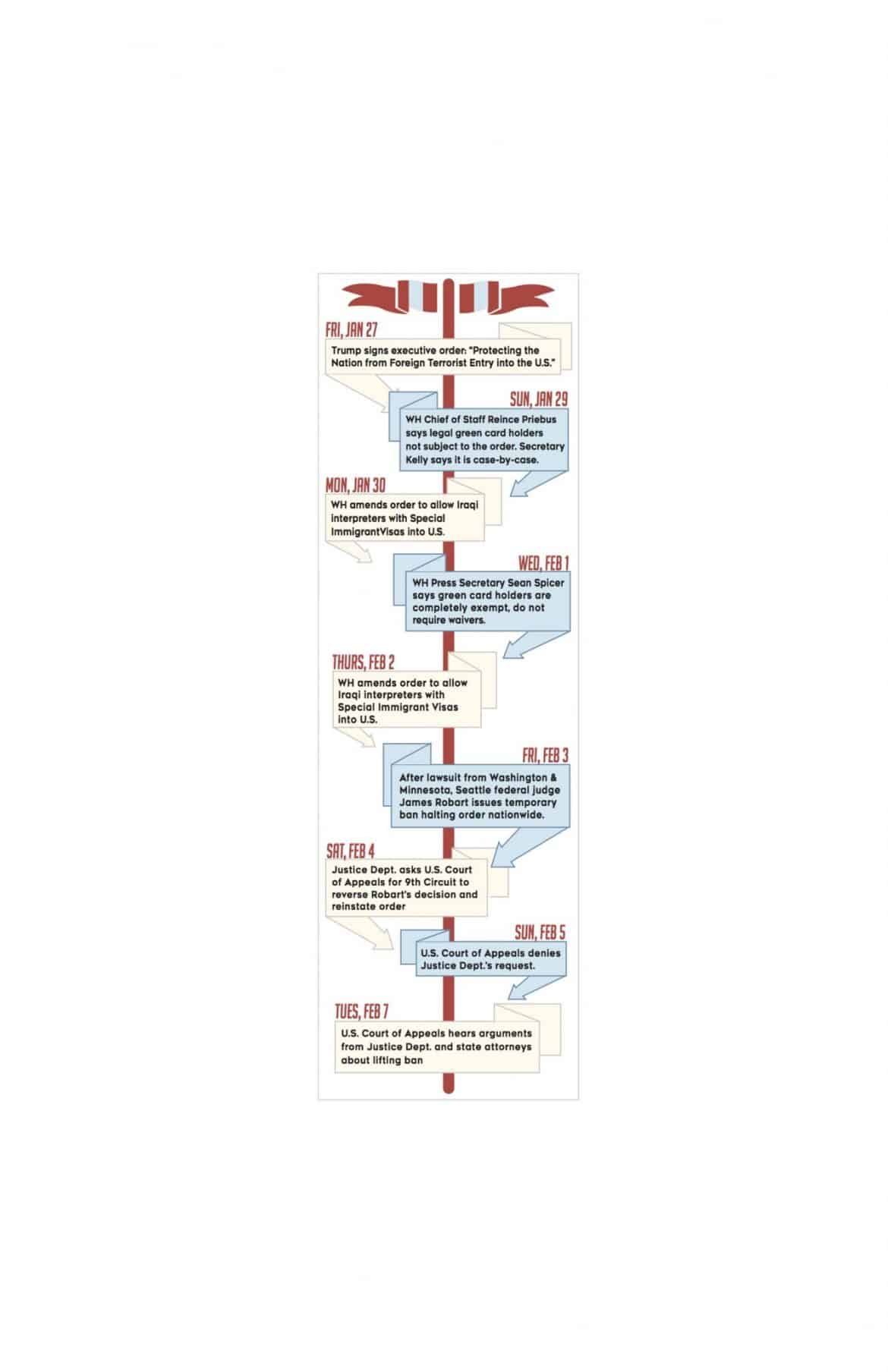 On Tuesday, Feb. 7, the U.S. Court of Appeals for the 9th Circuit heard arguments from the “State of Washington v. Trump” case after Seattle federal judge James Robart issued a temporary restraining order halting President Donald Trump’s executive order that was signed Friday, Jan. 27. The court will decide in the following days if the restraining order will be lifted. However, an appeal to the Supreme Court is likely, according to The New York Times.

In response to the appeal on Tuesday, Trump tweeted, “If the U.S. does not win this case as it so obviously should, we can never have the security and safety to which we are entitled. Politics!”

The executive order, titled “Protecting the Nation from Foreign Terrorist Entry into the United States,” suspends the entrance of all refugees for 120 days and Syrian refugees indefinitely, according to the White House. It also bans immigration from seven predominantly Muslim countries — Iran, Iraq, Libya, Somalia, Sudan, Syria and Yemen — for 90 days.

“I’m establishing new vetting measures to keep radical Islamic terrorists out of the United States of America. We don’t want them here,” Trump said in a signing ceremony at the Pentagon on Jan. 27. “We want to ensure we are not admitting into our country the very threats our soldiers are fighting overseas.”

Following the order, students and immigrants with valid visas and green cards were detained in airports across the world or sent home due to widespread confusion about the ban, according to CNN.

The order has been criticized and praised by political figures, the media and the general public alike, including former Attorney General Sally Yates, who said in an announcement on Monday, Jan. 30 that the Justice Department would not defend President Trump’s order.

“I am responsible for ensuring that the positions we take in court remain consistent with this institution’s solemn obligation to always seek justice and stand for what is right,” Yates said. “At present, I am not convinced that the defense of the executive order is consistent with these responsibilities nor am I convinced that the executive order is lawful.”

Later that evening, Yates received a formal letter from Trump informing her that she had been removed from office, and Dana J. Boente was promptly sworn in as acting attorney general, according to the New York Times.

The executive order sparked protests around the country in cities and airports, including the steps of Arkansas State Capitol where hundreds of Arkansans gathered on Sunday, Jan. 29 to voice their opposition to the ban and their support of Muslims and refugees, according to Arkansas Matters.

Similarly, students and faculty at Harding are feeling the impact of Trump’s order, including senior Dorothee Garcia, whose parents and brother still live in Sudan. Garcia said that even though her family does not have Sudanese passports, she is worried about her plans to travel to Sudan for the summer.

“I don’t want there to be any complications of me leaving the country, only to face problems coming back for my last semester,” Garcia said. “Especially with one of my life-milestones, I’m worried about my parents not being able to enter the U.S. for my graduation. I think there are many faces to evil people. Inhibiting whole populations (from) entry and, to an extent, staying in the country, isn’t right.”

Senior Chukwuma Umezurike, an international student from Nigeria, said that while America has the right to enact policies it deems necessary to protect its borders, the court will have to decide if this particular policy is constitutional.

“I personally believe that what has made America exceptional over the years has been its belief and practice in core principles and values which I think this recent order deviates from,” Umezurike said. “This order could have been less chaotic and less confusing if the appropriate interagency collaboration had been done properly.”

Monte Cox, dean of the College of Bible and Ministry, said that while he is unsure of the constitutionality of the executive order, he is saddened by the motives behind it.

“Our default setting must be to welcome, to be hospitable,” Cox said. “Right now, there is a climate of fear and fearfulness toward the other, whatever you think the other might be — someone who is not like you.”

Cox also commented that due to the politics of the situation, Christians can often miss an opportunity to fulfill their mission to the strangers among us.

“Let us tend to your huddled masses yearning to breathe free,” Cox said. “Give us your tired and your poor — us, the people of God — and we’ll take care of it.”

Due to the amount of opposition to the executive order, a lawsuit was filed from the states of Washington and Minnesota, resulting in Robart’s temporary nationwide ban on the order on Friday, Feb. 3, according to The New York Times.

The White House quickly retaliated on Feb. 4 saying the federal government would challenge the Robart’s ban, according to USA Today. The Justice Department asked the U.S. Court of Appeals for the 9th Circuit to reverse Robart’s decision and reinstate the executive order and were denied on Feb. 5.

A decision on whether the ban will be lifted and the executive order reinstated will come in the following days, with the likelihood of an appeal to the Supreme Court as well.