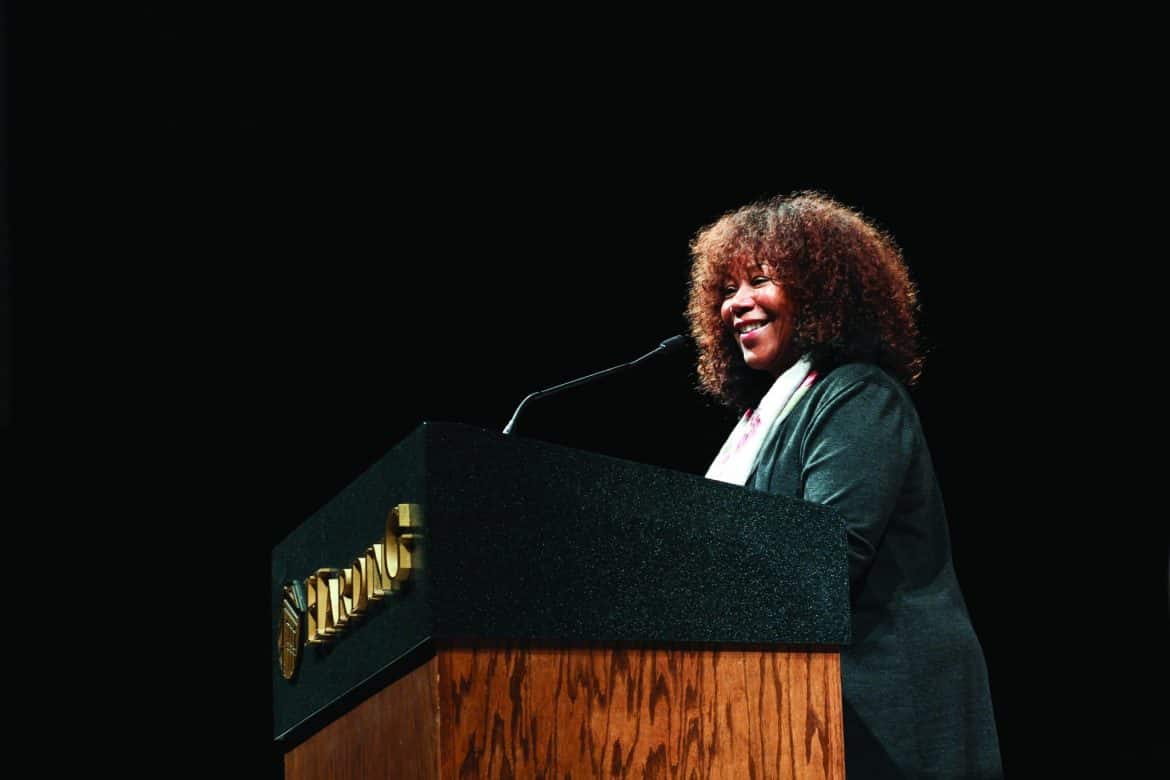 On Thursday, Feb. 2, the American Studies Institute (ASI) hosted Civil Rights icon Ruby Bridges as the last installment of their Distinguished Lecture Series for the 2016-2017 school year. She was named the youngest Civil Rights figure, being the first black child integrated into the New Orleans school system in 1960. Elizabeth Eckford, a member of the Little Rock Nine, was also in attendance for the speech.

After taking a test to determine her academic ability, Bridges was selected as one of six black children to attend all white schools in the New Orleans area, and was one of three set to attend William Frantz Elementary. The two others backed out, so she attended the first grade alone starting on Nov. 14, 1960, flanked by four US Marshals. Many parents of the children who went there protested outside on her arrival and even pulled their children out of the school.

Bridges described meeting her teacher, Mrs. Henry, who taught only Bridges for her entire first year at William Frantz.

“I had never seen a white teacher before, not to mention she looked exactly like those people outside,” Bridges said in her speech. “All those people I had seen were angry, screaming and shouting, so I didn’t know what to expect from her. I remember looking around her at the classroom, and all I saw were empty desks, and I remember thinking then, ‘My mom has brought me to school too early, there is no one in the class.’ Indeed, it was too early. It was years too early.”

Bridges’ story inspired many, including the realist painter Norman Rockwell, who created the work “The Problem We All Live With” based on her first day at William Frantz.

In an interview that took place before the speech that night, Bridges said that she learned about Rockwell’s painting through her old child psychologist, Dr. Robert Coles.

“He and Norman Rockwell were best friends,” Bridges said. “I think that had a lot to do with that particular painting. Not to mention that Norman Rockwell, and I know this because I sit on the Rockwell board, he wanted to make a political statement about the state the country was in back then.”

Senior fine art major Virginia McGiboney said she was fascinated to hear more about the strength of the small child from the artwork.

“The painting shows perfectly what Mrs. Bridges was going through at the time, a small innocent girl walking to school surrounded by four tall men with yellow bands,” McGiboney said. “Seeing the tomato splash against the wall and graffiti in the background, you can tell this little girl is not in a safe place. Yet, she is still walking to school to get an education. She doesn’t realize the hate that is going on in front of her. She has her head held high and carries her school supplies; she looks determined to go to school. It makes you realize you can be a child, and yet there are people out who want to hurt you, maybe even kill you, just by doing something a little different.”

In the same interview that took place before the speech, Bridges said that sharing her story at this time is needed, especially considering the current state of race relations and political discourse in the United States.

“I think my message is extremely important, especially right now,” Bridges said. “I think we tend to forget the color of our skin is not as important as we make it out to be, that we shouldn’t be judged by what we look like on the outside. I don’t think that’s changed. You think about this painting and what that meant in 1960 but we’re faced with the same issues today, so it hasn’t changed. The message is equally as important, especially, I believe, for our young people. I think racism has evolved in so many different ways since then, but it’s still here and alive.”

Bridges established the Ruby Bridges Foundation, which promotes cultural understand through community service, after volunteering at William Frantz years later. From her experience as a child, she continues to promote multiculturalism and community service in elementary schools.

“Racism somehow makes us think that we need to only trust people that look like us, our own kind … but you know that is not true,” Bridges said in her speech. “You know that we do not live in a world like that today. You can’t look at a person and tell if they’re good or bad. I think it’s not just the color of our skin. I don’t believe that’s the issue. I think that’s what’s being used to divide us. I think what we’re faced with right now is good and evil … Evil doesn’t care what you look like. If you open yourself up to it, it will use you to do the work that it wants done … We cannot win unless we come together, good against evil.”