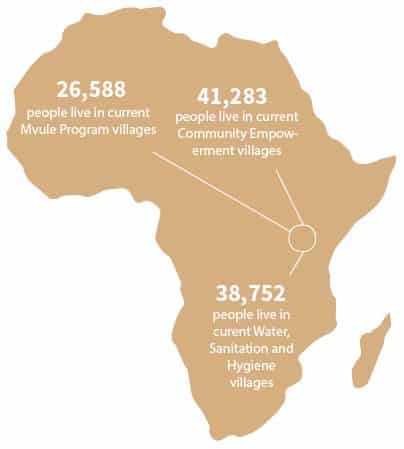 Alumna Danny Cagnet was finishing her bachelor’s degree at Harding when her marketing professor gave her an article regarding early ideas of “doing well by doing good” and positively influencing others through business. Her professor proceeded to invite her and two other business majors to accompany a church planting team for a 6-8 week internship in Jinja, Uganda, to experience and learn about business in another part of the world while working with Ugandan missionaries.

“My initial reaction (to Uganda) was, ‘Man, this is different — different than what I’ve ever seen before,” Cagnet said. “I was processing, ‘How do you help when you know you can’t do it all, when you can’t help everyone?’ And that little bit of feeling overwhelmed in that, but also realizing that there might be some little good that can happen, and trying to be a little participant in what God wants to happen there … I learned to appreciate many of those differences to say that our way is not necessarily the better way, it’s just a different way.”

After her internship, Cagnet finished her master’s at Harding and returned to Uganda upon invitation. What was intended to be a year-long trip turned into two. Cagnet helped run general operations at the Source Café and worked with women at the church in the city. She participated in weekly Bible studies and helped encourage women.

“Being part of a team of people who had a common goal and a common interest planting churches, making the world a better place and sustainable development — so much growth happened,” Cagnet said. “I would say it was two years of learning, but two years of loving, too. There was no doubt some sweet, sweet friendships were built in those two years and have grown over the years.”

Cagnet witnessed the birth of Kibo. She signed the initial registration papers and is a member of the board. During her time living in Jinja, the original mission to plant churches evolved into Kibo Group International, a sustainable development organization, and it was designed to partner with East Africans to pursue local solutions for poverty and injustice and help communities flourish.

The goal of Kibo is to find solutions to problems using local resources in the community. Kibo teams with communities in the Busoga region of Uganda and mediates their working together. The all-Ugandan Kibo staff teaches hygiene and health skills, economic skills and well-maintaining skills in order for the communities to teach others and remain sustainable.

“There is a tendency in American mission to want to go fast,” Kibo board member Deron Smith said. “We want to see results, we want to see them fast, and if they don’t come fast, then we are moving, and I think that knowing that you are going together, which takes time, is a valuable lesson learned. It’s much more important to get to the peak together than to get there separately and fast.”

Kibo is currently fighting poverty and injustice in over 40 villages in the Busoga region of Uganda. It has three main projects, including the Mvule Program, Community Empowerment and the Water, Sanitation and Hygiene project.

When a village begins in the Mvule Program, they are given mvule tree seedlings to plant and nurture. The tree yields timber and is threatened by habitat loss, and the seedlings are used to combat deforestation as well as develop income.

The Mvule Program is designed for economic development and provides motivation for the next stage of the project, which includes earning goats after showing responsibility from one year of growing the trees. In the village of Kigalama, the people planted 300 seedlings and earned 74 goats. The offspring of the goats provides capital for the village as they continue with the development of its economy.

According to Larry Norman, executive director of Kibo, The Mvule Project benefits a community holistically.

“The beauty of this is we have Ugandans working with Ugandans, this is not Western people telling them, ‘This is what you have to do,’ this is Ugandan people asking, ‘What can we do to make our own country better,'” Norman said. “In that processes of getting and caring for trees, getting goats and managing the offspring, they grow economically by selling offspring and developing their own ideas.”

Health education may include healthcare lessons to improve general well-being of the community. Lessons equip people to respond to illnesses that may come about in their families or village. The life skills training involves an approach for comprehensive behavior change through lessons on topics like decision making, relationships, resisting peer-pressure and self-esteem.

Healthy kitchens encompass general health and safety. In the village of Butamoga, women cooked on traditional open fires. However, open fires often cause burns, smoke inhalation and deforestation from the rapid burning of the wood. In addition, children often fall into the open fires.

Kibo staff taught the women how to build safer and more efficient stoves using materials found just outside the home such as ant hill mud, banana leaves and grass. After women learn how to build these stoves, they are able to share with their friends, which in turn helps families in other villages as well.

The stoves often improve home life for the women as well, since food is cooked faster and ready for husbands when they return home from work. It is not uncommon for men to beat their wives when their meals are not hot and ready when they expect them to be, and these stoves help keep women safe.

Freshman Mark Sekimpi, a Uganda native, has grown up watching his mother, a Kibo staff member, work in the community empowerment aspect of the organization. Sekimpi said he has seen a change in the behavior of Ugandans from the work of Kibo.

“Here in America, it is not a rare thing having a man standing in the kitchen with his wife, but back in some parts of Uganda, that is not going to happen,” Sekimpi said. “A man going into the kitchen, helping a woman to cook — no way. But with (my mother’s) effort and hard work and love for the people, she has been able to at least make some changes and improvements for people and some men now sit in the kitchen, cook with their wives, help them out, do housework and other things, so there is success.”

According to a 2012 Kibo report, approximately 50,000 wells in Africa are no longer working, a $360,000,000 investment no longer giving a return. Kibo argues this is due to several factors, including a shortage of resources in local communities to repair wells and lack of maintenance training from nonprofit organizations who dig the wells.

Water, Sanitation and Hygiene requires Ugandan participation if a village requests a well to be maintained after it is dug. Communities are required to raise a portion of the funds for well repair and organize a committee to fund maintenance and repair the well if it breaks. All communities are also required to undergo sanitation and hygiene training before the establishment of the well in order for the water to remain clean and useful.