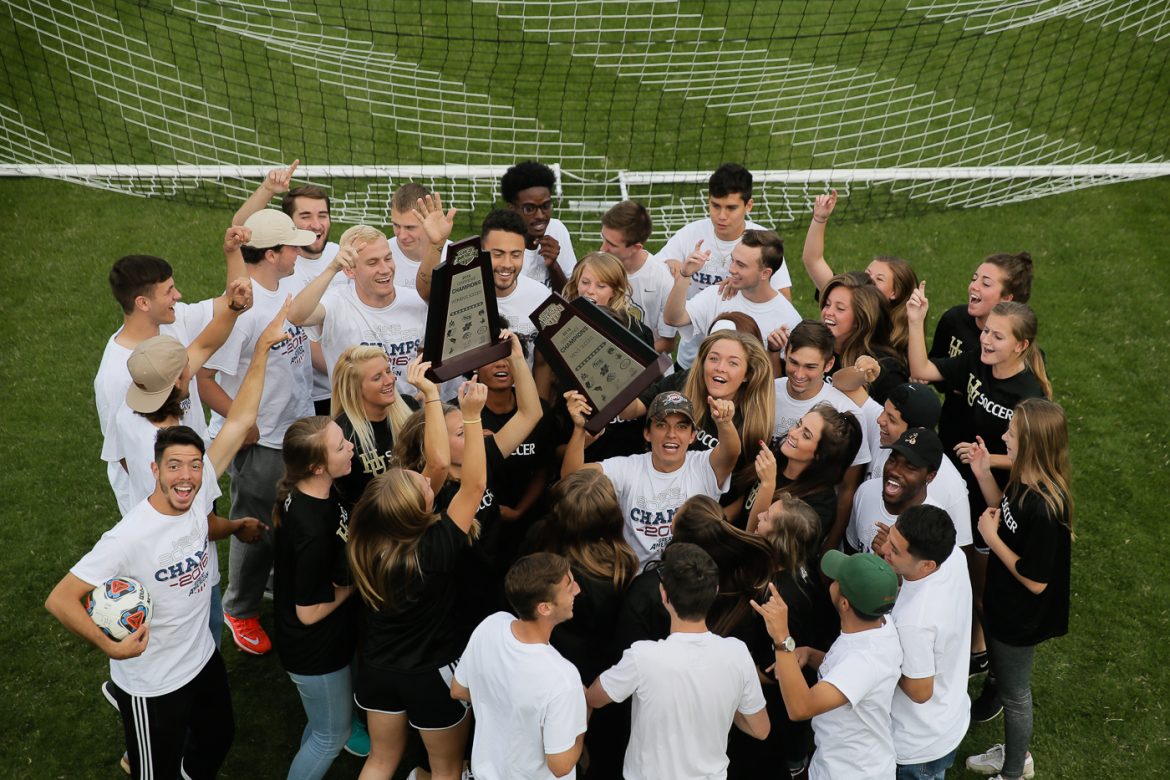 When the women’s soccer team faced Southwestern Oklahoma State University (SWOSU) on Saturday, Nov. 5, a Great American Conference (GAC) Championship was on the line. After 110 minutes of play left the score tied 2-2, freshman goalkeeper Jessica Woessner saved three penalty kicks in the shootout to give sophomore defender Sierra Phillips a chance to win the game with one shot. As Phillips’ kick flew past the SWOSU goalkeeper, the Lady Bisons rushed the field to celebrate their second straight GAC title.

“I was at the bottom of the dogpile, and I couldn’t breathe, but when I finally got up, I was so happy,” Woessner said. “There were just a lot of situations in that game where all that we had worked for was riding on one play, so when we came out on top I was so relieved.”

After hosting and winning the tournament last season, the Lady Bisons were seeded third this year, having lost four conference games. Senior defender Hannah Wilhelm said the team drew from its experience from last year when it faced adversity during the regular season.

“The games we lost were kind of rough but it made us become closer as a team,” Wilhelm said. “I think it helped a lot to know what it felt like to win (last year) and to want to do it again. Even though we lost some good seniors, we knew had a good enough group to do it again.”

Joining the Lady Bisons in their championship celebration were head coach Jon Ireland and the men’s soccer team, who made the trip to Weatherford, Oklahoma, to watch the women’s team play after their GAC semifinal win over Ouachita Baptist University on Friday.

“The guys had so much fun at the girls’ game,” Ireland said. “I mean they were doing cheers and chants on the sideline. Our guys were almost the first ones to start the dogpile; our whole team was out there jumping up and down with the girls’ team. It’s pretty special to see that, and I do think that made a difference, because I think when we left there, the guys had that image in their mind that that could be us.”

A day later on Nov. 6, the Bisons would start their own dogpile after a 2-0 victory over 1-seed Oklahoma Baptist University (OKBU) gave the men’s soccer program its first ever conference title. The win marked the third GAC Championship of the weekend for Harding after the women’s soccer team and the football team each claimed a title on Saturday.

The Bisons were contained offensively in a scoreless first half against OKBU before sophomore forward Jeremy Nwonumah finally broke the tie with a goal in the 58th minute.

According to Ireland, sophomore midfielder Jason Diaz’s successful penalty kick in the 71st minute all but sealed it for the Bisons, especially as they reached the final few minutes of the game.

“Once we got under five minutes, you could just sense it,” Ireland said. “Our guys were so focused and so driven. The second goal helped the guys calm down and be composed and once they got to the last few minutes, they were not going to give that up.”

In his first season as head coach, Ireland led the Bisons to a program-best 14 wins. Senior defender Jeremy Rector said Ireland’s transformation of his team’s style of play made the difference this season.

“(Ireland) has gotten the players to believe that if we buy into the system that he’s going to help us out with, then we can do great things,” Rector said. “Last year we played more defensive and kind of sat back and absorbed the pressure, but this year he completely changed it, and we’re all attacking. Defending starts with the forwards, and they’re putting pressure up there so that makes the other team make mistakes.”

The championship victory was the final game for Rector and four other seniors, as the men’s team fell two spots short of qualifying for the NCAA Tournament in the Central Region Rankings. Rector said, however, that ending his career with a GAC title is a dream come true.

“It’s incredible, especially for me and some of the seniors,” Rector said. “These last couple of years have been rough at times, so to go out like this is pretty cool.”

The Lady Bisons’ championship win clinched them a second straight NCAA Tournament berth under head coach Greg Harris. Harris said his team is prepared for a more successful trip north after losing its opening round game of last year’s NCAA Tournament in Minnesota.

“Our mindset going in is that this is a new season and it’s about winning,” Harris said. “We want to eliminate the little mistakes and do well the things we do well. There’s 48 teams left and these teams can win games because if you make a little mistake, they make you pay for it. The girls have been practicing hard; they don’t want to just go and show up, they’re going up there to win.”