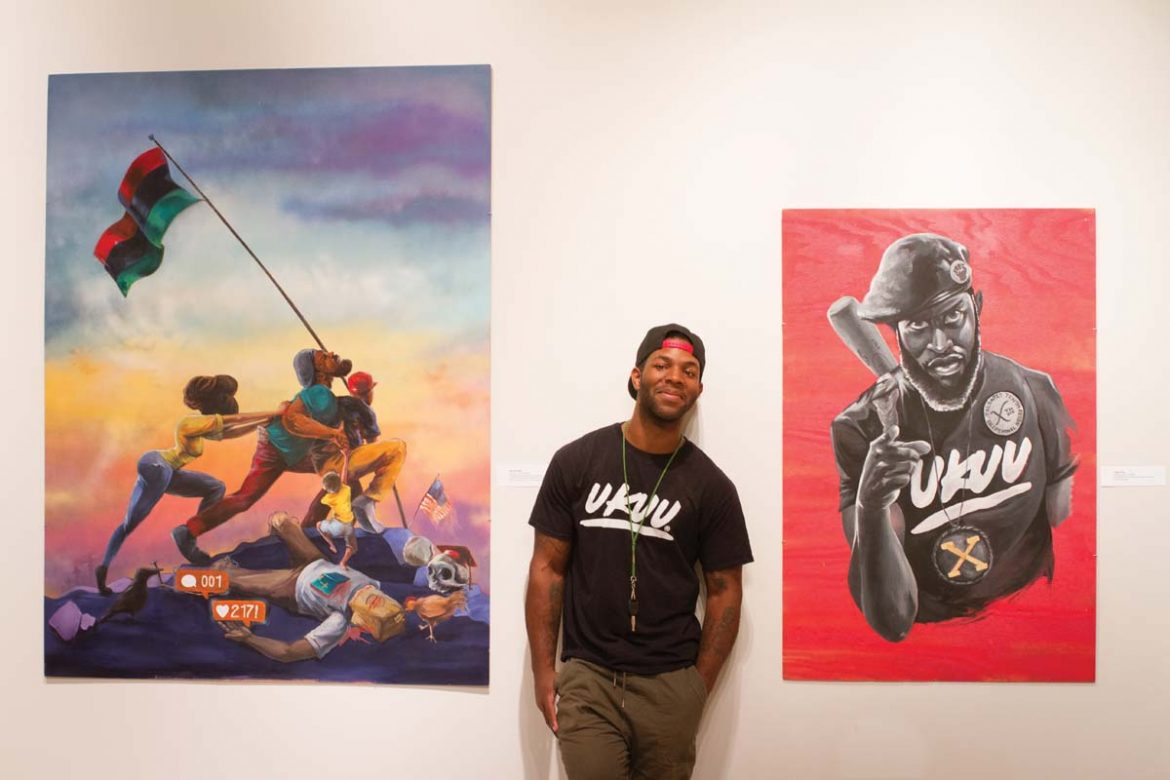 “A man paints with his brains and not with his hands,” alumnus Tramaine Wilkes said. “My goal for this show is to just have enough strong pieces that people will talk about it, create dialogue and that they actually try to do something about it.”

From Oct. 20 through today, the Stevens Art Gallery showcased art from Wilkes, who is currently touring the country for his “Through Colored Lines” exhibit that showcases artwork he created in response to the recent police shootings involving black individuals.

According to professor John Keller, “Through Colored Lines” is not an exhibit meant to be interpreted as an attack on police officers, but it is intended to create dialogue and address the current fears within our black communities.

Junior art education major Jordanne Lombard toured the exhibit with her art class. During the session, Wilkes discussed the background of his art.

“Walking through the exhibit was a little uncomfortable at first, but it caused me to evaluate my thoughts and reflect on my beliefs,” Lombard said. “I believe that the artist did exactly what an artist should do: challenge the viewer. What a better place than Harding to do exactly that? It makes us take a step out of the Harding bubble and realize the pain and suffering that is going on in our world around us.”

According to Adams, the administration saw the exhibit and approved it before it was open to the public. He said the administration seemed to appreciate the art, though being anxious about the reactions from students and visitors during Homecoming weekend.

Lombard said she was approached by an alumnus after viewing the exhibit during Homecoming. She said the man appeared upset and called the art offensive and “unchristian.”

“I was in shock,” Lombard said. “I wanted the man to try to understand where (Wilkes) was coming from.”

According to Adams, the exhibit was created in conjunction with the campus read, “Amazing Grace.”

“It took that jarring for (the English public) to change and to abolish slavery, and maybe it’s going to take us staring down one of our own — staring at what’s there and the real feeling — the real passion that’s there from one of our own alumni to help us say, ‘maybe it’s not all just made up stuff from the liberal media,'” Adams said. “If it was good enough for Wilberforce, and it was good enough for us to have an entire university read about Wilberforce, then do we shrink from the opportunity, or do we step out there? We step out there.”

Wilkes was raised in Thomasville, North Carolina, and learned to draw from his older brother in order to stay out of trouble. He later found refuge in a local YMCA where he was encouraged to pursue art and athletics. After serving in the U.S. Navy for four years and receiving his associate degree from Grossmont College, Wilkes transferred to Harding to play football. He graduated in 2013 with a degree in painting.

Wilkes currently travels by car and creates art in public with community collaboration. He said he spends many nights in his car and uses profits from his artwork to fund his trips. He has several works he calls community-collaborated pieces. For Wilkes, it is a way of starting conversations and allowing opinions to flow freely.

“There are images that, as white Americans, we don’t like to see or admit to, but he’s painting from the experience of his community,” Adams said.

Adams said it is important for the art department to showcase Wilkes’ art because he is a Harding alumnus and is as much a part of the Harding family as anyone else. In addition, Adams believes that ethnically diverse areas have been under-represented as Harding.

“We can’t not acknowledge that there are difficulties, and that we can talk about it in a way that is framed in a positive way,” Adams said. “We are a family, and families do go through these things, and we are better for it.”

Searching for Future Opportunities in Chicago